Shelke appears as an obtainable card.

Shelke is a playable character who could be initially recruited during the Challenge Event The Dirge Begins as a First Time Reward for completing A Girl Named Shelke stage on Classic difficulty. 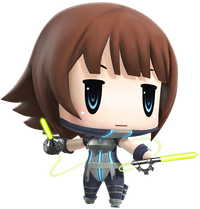 Shelke appears during Lann and Reynn's attempt to reach Mako Reactor 0, though they are unable to use Mirages, and instead rely on using the machines they capture inside the facility. Shelke works alongside Squall as members of the League of S, a resistant group against the Bahamutian Empire, which is led by Brandelis. Using her abilities, she disables the bindings on the twins to allow them to use their Mirages, and escorts them through the facility.

Shelke's story is similar to her origins in Dirge of Cerberus. While not much of it is explained, details from the nightmare created by Diabolos imply that Shelke had chosen to become an Acolyte as the Federation desired, though her family was made unaware of this. While she underwent the process to becoming a Soul Crystal, her village was destroyed, and her parents were killed, including her brother, who was searching for her. When the League of S attacked the church where the process was taking place, Shelke left, thus leaving the process incomplete, and leading to her current situation. She would later join the League of S sometime afterwards.

Shelke is a Champion whose Medal can be purchased after completing the Mako Reactor dungeon. Her Medal uses only one star in the Champion Gauge. She can fully heal the party, and remove all status alignments.

Countertek
Shelke is a master of Countertek, an impressive skill that allows her to neutralize other techniques and mechanisms. However, it cannot act on latent forces. This is why she pushed Lann and Reynn as hard as she did; the twins' suppressors had to be working at full power in order for Shelke to target those suppressors.

So why not give a heads-up? Most likely, she just couldn't be bothered. If something needs to get done, she's not one to sit around and talk about it. Maybe Shelke wanted to test the twins' skill and resolve firsthand—but if so, she's not telling.

As you might expect, Shelke is frequently misunderstood, and she rarely seeks or receives the gratitude of others. So when Tama spoke out for her, and Lann told her she was the "bestest," it really caught her off guard.

The Tsviets
Shelke works for Shinra as a member of both SOLDIER and the elite force known as the Tsviets. The Tsviets' members have colors for code names, but Shelke's code name—Shelke the Transparent—sets her apart as special, even among her already extraordinary peers.

Emotionally Detached
The nightmares Diabolos subjected Shelke to were twisted versions of reality—but they were still, to some extent, true.

Shelke's life has not been sugar and rainbows, and she's learned to cut herself off from her emotions in order to cope. Additionally, it's in her nature to put all her energy into the task at hand, so she frequently overlooks details she has determined don't matter. For example, she only realized the strangeness of a Mirage like Tama talking when Vivi pointed it out to her.

All the same, the lack of distractions gives her complete objectivity, so she's surprisingly good at reading other people's feelings. Ironic, isn't it?

The following is a list of quotes uttered by Shelke when talking to her.

I don't need your help at the moment.

No need for pleasantries.

Don't you have something else you should be doing?

Countertek
Add a photo to this gallery

World of Final Fantasy.
Add a photo to this gallery
Retrieved from "https://finalfantasy.fandom.com/wiki/Shelke_Rui/Other_appearances?oldid=3393166"
Community content is available under CC-BY-SA unless otherwise noted.