I mean, they gotta be tough, after all they are surviving here.

Sheep (羊, Hitsuji?) are recurring creatures in the series. They appears as both enemies and normal animals.

Sheep are found in Gysahl. The girl herding them says she might as well be herding lemmings.

Sheep are found in Istory, and are said to be very territorial. Talking to one causes Bartz to get kicked over a fence, leading to a bard who teaches the party Romeo's Ballad. There is also a named sheep in Moore.

In Quelb's inn a wolf serves a meal to the party, which recovers their HP and MP, and for dessert, he gives out eight Potions for free. Each time the meal is served the number of sheep grazing in the village decreases by one. As there are initially three sheep in the village, the party can use this free service three times.

A concept artwork of a regular sheep exists, but no regular sheep appear in the game. Yan is a sheep-like enemy found on the Vile Island, and is the toughest regular enemy. A friendly version of it exists as well, part of the friendly monsters sidequest.

Sheep both wild and domesticated appear. Sheep are exploited for their meat and milk (used in Cooking), wool (used in Clothcraft), and horns and teeth (used in Bonecraft) by both the Enlightened Races and Beastmen alike.

As enemies, both Sheep and the much larger Rams can be found in various locations in the wild. With the notable exceptions of the Broo raised by the Quadav and the Fighting Sheep trapped inside a Comet Orb and released on Horlais Peak for the Battlefield "Hostile Herbivores", sheep are docile unless attacked first. The same cannot be said for the belligerent rams, though. However, all sheep will come to each others aid if assaulted or otherwise provoked, so the unwary bloodthirsty adventurer may find him or herself unexpectedly surrounded by a whole flock of enraged sheep.

In the Near East, there is also a black subspecies of sheep known as the karakul; if wild karakul are attacked, the fleas that feed on them have been known to leap off of their sheep and find fresh prey in the attacker.

The adventurer's main interaction with domesticated sheep is likely to come in their efforts to raise their Reputation, as an elderly man named Melyon living in Selbina will give out a simple repeatable quest, "Only the Best", that raises reputation in most cities and requires merely they bring him food for his sheep. Melyon feeds his sheep cabbage (La Theine Cabbage), corn (Ears of Millioncorn), and moss (Boyahda Moss). In the Near East, Qiqirn harness sheep and use them to draw carts.

Beastmasters may choose to domesticate sheep themselves with their Charm job ability, or use Call Beast with an appropriate jug to summon a Sheep Familiar, Lullaby Melodia, or Nursery Nazuna.

Look at these things! I just wanna squeeze 'em till they pop!

On the Archylte Steppe, large sheep can be inspected and produce different types of wool depending on the weather:

Sheep are found in Archylte Steppe, but they don't appear in all weather. One mission is to collect wool from the sheep, where the player must go and find three large sheep and examine them for the wool.

A sheep figurine is also available as a monster adornment.

The Melancholy of the Lambs
We're the sheep of Gran Pulse
and our wool is the best,
We grow it this thick
so it keeps off the pests.
But the men chase us down
with scissors and shears,
And cut it all off
before it covers our ears.

Our Rough Wool is strong
and makes saddles and carpets,
Our Thick Wool makes hats
and booties and blankets.
But it's our fine Fluffy Wool
that holds them in thrall,
When plucked at the roots,
It's the best wool of all.

Its hard to be a sheep
out here on the plain,
Avoiding the hunters
is such a terrible strain.
Oh, I wish that just once
I could munch on some grass,
Without a man coming to pull
a tuft from my... side.

Sheep are raised in Aryas Village on the Wildlands, known as the Fuzzy Sheep. The local sheep expert is Dr. Sheep, who has bred a large variety of the Fuzzy Sheep, whose milk is said to be especially creamy. If Lightning can get her hands on some milk from the village, she can give it to the Angel of Valhalla to restore his vitality. The Fuzzy Sheep are easily scared and wander away from their pen, requiring Lightning's help in herding them back.

During the night the Fuzzy Sheep disappear to places unknown, and a biologist called Cornelia is dying to discover where they go at night, but the nocturnal plains are rife with monsters. Lightning helps protect the sheep from monster attacks and discovers the sheep retreat to the ruins south from the village to incubate their eggs. The discovery of the Fuzzy Sheep laying eggs is the scientific discovery of the century.

Lightning can get a Fuzzy Sheep Figurine as an adornment. 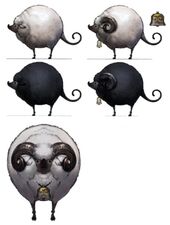 Tender Lamb is a minion.

The Animist job is able to utilize sheep-summoning abilities.

The Pillow item when used makes four sheep appear across the screen, attempting to inflict Sleep on all targets.

Sheep are the pride of our realm. First, pat the sheep's nose. Second, stroke the right flank. Third, stroke the left flank. Last, tug the tail... That's the way to handle sheep!

Sign near the windmill in the town of Horne

Sheep makes an appearance in the town of Horne. The stone doors within the Magic Laboratory are adorned with the image of a sheep and stone statues of sheep are used as part of a puzzle within that dungeon.

A sheep in Final Fantasy XI.

A karakul in Final Fantasy XI. 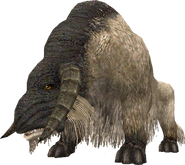 A ram in Final Fantasy XI.

Melyon and his prized sheep in Final Fantasy XI. 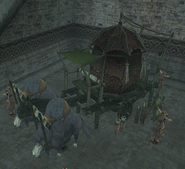 A qiqirn cart pulled by sheep in Final Fantasy XI.

Can of milk in Final Fantasy XIII with a picture of a sheep on the can.

Vanille plucks wool from a sheep on the Archylte Steppe.

Sheep in the Azim Steppe in Final Fantasy XIV. 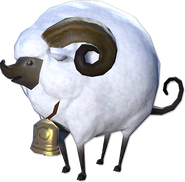 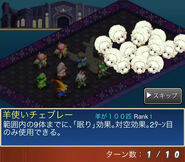 Sheep (Ovis aries) are quadrupedal, ruminant mammals typically kept as livestock. Like all ruminants, sheep are members of the order Artiodactyla, the even-toed ungulates. Although the name "sheep" applies to many species in the genus Ovis, in everyday usage it almost always refers to Ovis aries. Numbering a little over one billion, domestic sheep are also the most numerous species of sheep.