Earth
Sharon is one of three permanent party members of Final Fantasy Legend III. She is the granddaughter of the Elder of Dharm in the present. She is raised by her grandfather, along with the three youths sent from the future. She starts out as a human fighter who appears to have a minor crush on Arthur.

This section about a character in Final Fantasy Legend III is empty or needs to be expanded. You can help the Final Fantasy Wiki by expanding it.

Sharon is a human whose innate element is Earth. As with all four main characters in Final Fantasy Legend III, Sharon's possible transformations depend on her current form (see Transformations for more information). Like all four main characters, she's capable of equipping all weapons and armor, and can learn all spells. Her starting stats lean towards attributes in strength and defense, which make her a potential strong physical fighter.

Sharon makes an appearance as a card in the card game. 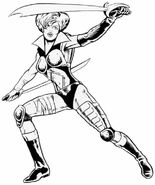 [view · edit · purge]Sharon is usually a female name that derives from an Israelite place name meaning "forest" in Hebrew, referring to a fertile plain near the coast of Israel. This gives its name to a type of flowering shrub, the rose of Sharon.