The Shark is an enemy in the original Final Fantasy. It appears in groups of two or alone. Due to its high Attack power, it is the most dangerous enemy in the ocean when the Warriors of Light first set sail on their ship.

In the ship, Sunken Shrine

Physical attacks work wrll, but if the player struggles, Thunder may be better (or, if there are more than one, Thundara). Shark is the strongest enemy in the game at the point where the party first obtains the ship, so it's advised to head straight for Elfheim not worrying about fights until the party has purchased Thundara. 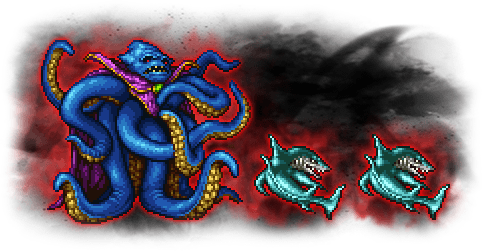 Retrieved from "https://finalfantasy.fandom.com/wiki/Shark_(Final_Fantasy)?oldid=3238198"
Community content is available under CC-BY-SA unless otherwise noted.