White hair is the most beautiful gift of the spirits.

Shara is a playable character in Final Fantasy Tactics Advance. She is a viera who specializes in archery. She is a member of Ritz Malheur's clan, whom she quickly befriends. Her past is a mystery, but like Ritz, she has white hair.

Shara is a viera with a tall, lanky figure and a head of pure white hair she describes as a "blessing" according to her people's tradition. She carries a bow and wears a green sleeveless mid-shirt with a high collar and matching skirt with a pair of high-top shoes.

Shara has a serious demeanor typical of viera, and has been close friends with Ritz ever since she arrived in Ivalice. During the mission "A Maiden's Cry'", Marche and Ritz discover that she is afraid of spiders and Antlion Larva. Shara has some similarities to Fran from Final Fantasy XII, in that both are quiet and wise but at times have some profound words to tell others. Both excel at archery, though that is something viera are good at generally.

Shara follows Ritz wherever she goes, and is present in every battle where Ritz fights. Marche must fight her near the end of his journey, when Ritz tries to stop him from reverting the world. When the world begins return to normal (seeing as it is starting to snow), Shara comforts Ritz, who does not want to go back to a world where her hair is white, by telling her that white hair is considered a blessing among the viera.

Shara can be recruited upon successful completion of the mission "A Maiden's Cry" and then entering any town, at which point a cutscene will occur which ends with her joining the clan. If she is dismissed from the clan, she can rejoin by completing "A Maiden's Cry" again.

Two Sharas can be on the field at once, using the Shara glitch.

Shara joins as a Sniper, though the player may change it to any viera job. Because she joins as this class, her stats are skewed primarily towards Attack and Speed with low HP and MP. She is initially equipped with Seventh Heaven, Galmia Set, and a Ribbon. Shara's arm ring as shown in her artwork is called the Topaz Armring. It is a Mission Item and is described as a sign of Clan Ritz. It increases Earth damage.

Additionally, she has the following abilities learned by default: 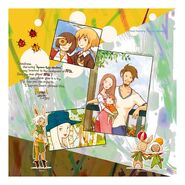 "Shara" is a variant of Sarah (שָׂרָה in Hebrew), which is a Hebrew name for "princess", or a woman of high rank.