A lady of noble birth and revered as the ultimate mage. Prideful with a rough temperament, not a single mandragora will sprout in the wake of her anger.

Shantotto is an extra character in Dissidia Final Fantasy and Dissidia 012 Final Fantasy. A hero who fought in the Crystal War, Shantotto is a famous Tarutaru professor of magic from Windurst in Final Fantasy XI. She is known for her high-pitched, haughty laughter and overall arrogant nature. Shantotto is respected for her great power, but she refuses to admit it when she finds someone who could be superior. She fights using powerful spells that level up and become stronger as she gains Bravery.

As an extra character in the original Dissidia games, Shantotto has no impact on the main storyline and has no antagonist opposing her, although she's had a long-standing rivalry with Gabranth. In Dissidia Final Fantasy, Shantotto is unlockable by completing the Distant Glory - The Lady of Legend storyline and purchasing her as a playable character in the PP Catalog for 1,000 PP. In Dissidia 012, she is available as a purchasable character at the PP Catalog from the start and costs 100 PP.

Shantotto's outfit is based on her original design in Final Fantasy XI: a robe with black and white stripes, gold linings, and two gauntlets, known as the "Tactician Magician's Cloak Set". She has almost the complete set, except for the head gear that goes with it. Her EX Mode outfit is the "Cobra Unit Robe Set", also from Final Fantasy XI.

Shantotto's second alternate outfit is the "Black Cloak," player-crafted garments fundamental to the wardrobes of Black Mages in Final Fantasy XI. She wears a black cloak with a hood and red linings, a silver design on the front and a sash around the waist. Her EX Mode grants her a pair of glasses and a robe in various shades of brown and yellow, the vestments of a Windurstian Minister, the position Shantotto occupied before her retirement. It is identical to what Apururu wears, albeit with her cowl down and gloves on.

Shantotto's DLC outfit, "Wedding Dress", is a set of armor worn by females during weddings. It features frilly white clothing and a Lilac Corsage in her right pigtail. Her EX Mode is based on the Goetia Armor Set, a set of powerful Black Mage armor consisting of a long black coat with several golden accessories. Shantotto's use of the armor is based on her museum profiles in Dissidia and Dissidia 012, which state she regrets she never married. 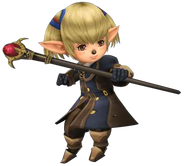 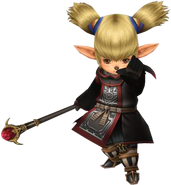 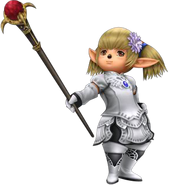 Shantotto's staff shares its appearance with several weapons for Black Mages in Final Fantasy XI, and is a short wooden staff with a stone set in the top. The stone automatically changes colors depending on Shantotto's current actions: red normally when using Fire, Retribution, and chase attacks; yellow when using Stone and blocking; dark blue when using Water; cyan when using Blizzard and Bind; green when using Aero or dodging; purple when using Thunder, A Couple Attacks, Stun, and initiating her EX Burst; and black when casting Bio and using her EX Burst. This is an allusion to the eight elemental staves in Final Fantasy XI, which each boosted a particular type of elemental damage; the color of the stone on Shantotto's staff when using her HP attacks and Bio matches the XI staff associated with that attack's element. There is also a texture for a white stone in Shantotto's model, but it is not used.

Dissidia NT and other spin-offs identify the weapon as the Iridial Staff; in Final Fantasy XI the Iridial Staff boosted all elemental damage and was synthesized by combining the eight lesser elemental staves, reflected by its stone being a swirl of multiple colors.

When Shantotto is defeated, she transforms into a doll. This is a reference to a special event battle in Final Fantasy XI where the player can battle Shantotto, but when they win "Shantotto" turns into a doll and another Shantotto appears and reveals the "Shantotto" the player just defeated was a puppet she had brought to life.

Although seemingly frail and helpless, Shantotto's aggressive, cunning, destructive, and unpredictable nature, coupled with her unsurpassed magical prowess, gained her a reputation both from warriors of Chaos and Cosmos alike as the most fearsome of them all during her time as an active warrior. Shantotto is a proud and arrogant Tarutaru, fighting to test out her powerful magic against her foes. In the English version, Shantotto has a habit of speaking in rhyme.

Shantotto was not bothered by being Cosmos's pawn, and was loyal to her. She often battled as an excuse to research and perfect the "ultimate spell." She guarded Order's Sanctuary singlehandedly while Prishe went out to explore World B under the pretense of "patrols." Shantotto battled Gabranth when he came to Order's Sanctuary intending to kill Cosmos and end the cycles of war. Gabranth asks her if she remembers him, claiming they fought in a previous cycle, and he ends their battle and leaves, telling her to ask Cosmos about the cycles and purification of fallen warriors.

When Prishe finds the Warrior of Light and brings him to Cosmos's throne, Shantotto helps Prishe convince Cosmos to endow the Warrior with her power and turn him into a champion of Cosmos. Later after Prishe reports to Shantotto about her encounter with Gilgamesh, and how Prishe saw him being engulfed by a portal to the Rift, Shantotto has the idea to use the Rift to escape World B.

Now aware of the true nature of the cycles, Shantotto decides to leave Cosmos as her amnesia hinders her magical studies. Wishing Cosmos luck with the cycles, Shantotto departs Order's Sanctuary and destroys a gateway rather than just freeing it. Garland finds her and questions this act, and Shantotto explains she wishes to escape the cycle of war. As the gateways are unstable space that act as portals to other worlds, destroying one may open a portal to the Rift.

An enraged Garland tells Shantotto escape is impossible and attacks her. In the aftermath, a portal appears as Shantotto suspected, and Garland warns there is no escape from the Rift if she enters it. Shantotto laughs, saying he said the same about the cycle, and leaps into the portal. The ending narration alludes to the gateway in Confessions of the Creator, stating Shantotto was never seen in the cycle again, but fluctuations in space occasionally allow a portal to open in World B, allowing others to cross over to the dimension she came to reside in after her escape.

When the warriors have obtained their Crystals, a flashback shows the confrontation between Shantotto and Gabranth. In a Report in Dissidia 012 the flashback is expanded to show duel, players taking the role of Shantotto to fight Gabranth.

In Dissidia's Distant Glory The Lady of Legend, and in Confessions of the Creator in Dissidia 012 at the "Curses and Hopes of Yore" gateway, the player can find Shantotto. Shantotto resides in another realm cut off from the cycles, and the manikins she has been using as test subjects in her magical experiments have begun to run wild. Shantotto tasks the player with dispatching them, and in return grants them a "private lesson" and battles them. Once defeated, Shantotto departs to duel with Gabranth, though she cannot remember his name.

Shantotto is a Chainspeller. Her Bravery are mostly supportive and some do not deal damage; they are intended to set the opponent up for Shantotto's HP attacks. Shantotto starts knowing all of her HP attacks and can chain them into each other when they hit to deal additional Bravery damage before doing HP damage. Shantotto's HP attacks change to stronger forms as she gains Bravery, gaining larger areas of effect, higher damage priority, and dealing more damage. In Dissidia, Shantotto's attacks level up to their second tier versions when she has at least 3000 Bravery, and reach level three at 6000 Bravery; in Dissidia 012, her spells reach the second tier at 2000 Bravery and third tier at 4000 Bravery. Shantotto is also very small and fast, making her extremely evasive. A major downside is that she has trouble dealing Bravery damage and at their base forms her HP attacks are much easier to avoid.

See also: Gameplay changes between Dissidia and Dissidia 012 for Shantotto 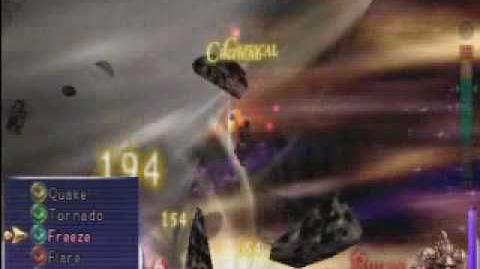 Shantotto's EX Mode is Two-hour Ability, where she equips the Cobra Unit Robe Set, an armor set for mages in Final Fantasy XI. She gains the ability "Manafont", the Two-hour ability for Black Mages in Final Fantasy XI. In Dissidia, this causes Shantotto to retain her Bravery after landing an HP attack, even when using her EX Burst and performing its final blow. In Dissidia 012, Shantotto's Bravery drops to zero after dealing HP damage, but recovers back to its base value instantaneously regardless of its amount.

Shantotto's EX Burst, Play Rough, has her execute "Skillchain: Fusion" using the weapon skills Heavy Swing and Howling Fist, then attacking with a Magic Burst. A menu appears, and the player must select the spells and press

once to execute the attack. The player must cast the spells quickly in this order after Shantotto laughs: Flare, Flood, Burst, Quake, Tornado, and Freeze. If successfully performed, Shantotto will deliver the final blow, consuming the opponent in a rainbow-colored blast of energy. Flare won't always be the first spell. 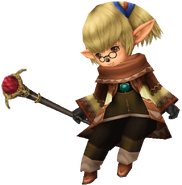 Shantotto was the first of two bonus characters revealed for Dissidia. Prishe was considered for the spot, but Shantotto was chosen instead; Prishe appeared in Dissidia 012 instead. 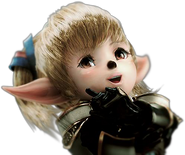