Shantotto was not meant to be a major character in Final Fantasy XI, but her presence is felt across more than a dozen appearances outside of the MMO realm. The following is a list of Shantotto's appearances in and out of the series universe. 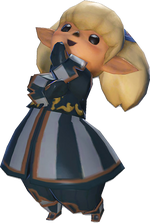 If you fail to treat her right, she will set your pants alight.

In her bonus storyline Shantotto is the guardian of a sanctum where other scholars and mages are allowed to study in peace. The area has recently been infested by manikins (by Shantotto herself in manikin-based experiments, which she divulges only in asides to herself), prompting Shantotto to task the player to destroy them. As a "reward," Shantotto gives the player a "private lesson" and battles them before going to duel Gabranth, though she can't recall his name.

Her alternate form has her wear the Black Mage artifact armor, and the black mage relic armor in EX Mode.

Shantotto is a full-fledged warrior of Cosmos in flashbacks. She is the guardian of Cosmos's throne and protects her from Gabranth when the judge attacks the goddess. She is present when Prishe finds the Warrior of Light and helps her talk Cosmos into making him one of her warriors. 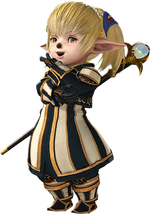 Shantotto is a playable character and a representative of Final Fantasy XI. She is classed as a Shoot-type character.

Shantotto appears as a playable character.

After the leaving her position as minister of the Windurst Orastery, Shantotto pursues her research free from responsibility. When prevailed upon by adventurers, she unleashes her peerless black magic upon any who dare stand in her way, with a strength that even the most grizzled of veterans quake before. Nowhere is there an enemy that can bring her down—her only failure in life being the failure to marry when she had the chance.

Shantotto is essential right from the beginning, with the highest raw Magic along with magic skills and stat-boosting abilities, the player can make use of her to tackle the onslaught of bosses in Dark Notes. However, her abilities cost high CP, so she'll need more experience to make full use of her.

The deadliest Tarutaru mage in Vana'diel. Her cute appearance and ladylike bearing hide a tyrannical temperament. Though she is both a hero and a genius, this audacious woman sees the world as but a plaything.

Shantotto is a default playable character. If the player did not select her among their party of four, she can later be unlocked by collecting Yellow Crystal Shards. She appears noticeably smaller than all other characters.

Shantotto appears as an ally and a summonable Legend. She is depicted in her default Final Fantasy XI outfit, as well as an event-related Santa outfit. She was first introduced as an event ally in the event, Winter Holiday Campaign while wearing an exclusive Santa suit. Leveling her up in this event granted the player the Shantotto I summon stone, along with each level-up at a specified number granting players an additional summon stone. 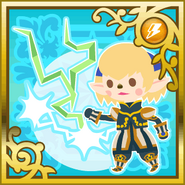 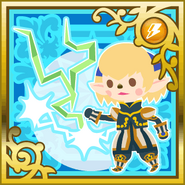 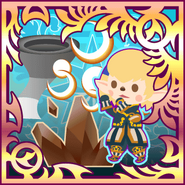 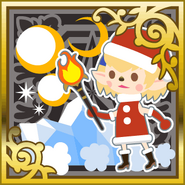 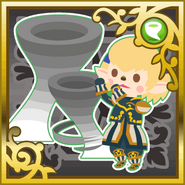 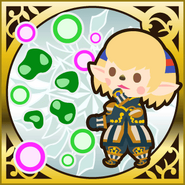 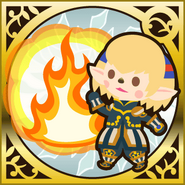 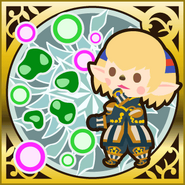 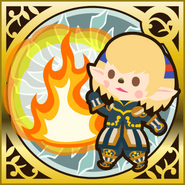 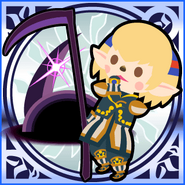 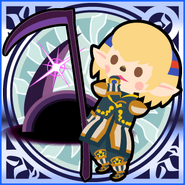 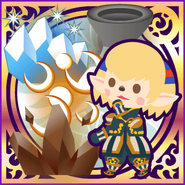 When speaking to this wee lady of Windurst, the topic of age is no doubt worst.

Shantotto is only available from the Premium Character Shop as a random downloadable content. She uses the Tornado ability during battle.

Shantotto is a playable character who can be recruited as the First Time Reward for completing Waughroon Shrine on the Classic difficulty in FF XI track of the Core Dungeons. She was also available on the Chaos gauntlet of Discord and Harmony. 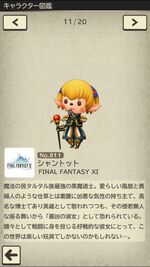 Shantotto appears as a summonable vision and optional playable character. She has two variants: the 3-5★ "Shantotto" (シャントット, Shantotto?) and the 5-7★ "Livid Shantotto" (ブチ切れシャントット, Buchigire Shantotto?). Both are Rare Summons; however, their role, job, stats and skillsets differ, as do their Trust Master rewards. 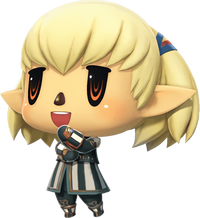 Age in Grymoire: Late 40s, according to Besaid's older folk
(Pressing Shantotto for details is not advised)

Always There to Assist?
When someone tells you that they're a specialist in curses, you immediately think bad thoughts. Still, a tool isn't good or bad in and of itself. It's all about how you use it, and Shantotto uses her knowledge of the hexing arts to solve problems for those in need. So curse or not, it can be a good thing! Now that that's settled, who wants one?

Shantotto's original soul was Tarutaru, a race known for their diminutive stature (not that it stopped her from towering above others in spirit, mind you). Luckily, here on Grymoire, everyone is already pretty tiny. When Shantotto's soul was born into a Lilikin body, her vertical challenges vanished.

Just Getting Started
Shantotto is the oldest Medium you'll meet in Grymoire (if you exclude Sherlotta and people removed from time's normal flow). That said, she still hasn't reached the age the original Shantotto was during the Crystal War. In other words, Shantotto's still got plenty of time to do great things in Grymoire.

She's on Your Side, Honest
Shantotto's pursuits are so lofty that she frequently forgets to connect with mere layfolk. And let's face it: her mastery of black magic and curses doesn't help public relations much, either. But as evil as her hobbies make her sound, one thing should be infinitely clear: no matter what schemes she's got bubbling around in that mysterious head of hers, you can bet it's always for the greater good.

Shantotto has a proven track record in Besaid, and knows exactly how to keep the locals safe and happy. So if you thought she'd completely lost her mind when she tried to do the Quacho Queen in—never fear! Everything she does has a purpose.

The following is a list of quotes uttered by Shantotto when talking to her.

Nothing better to do?

Ah. Have you got another mess you need repressed?

Make no mistake: only my curses have the power to save the world in its darkest, dire hour.

You'd be amazed at what I've wrought from that ruby you brought.
I reckon I couldn't convince you to fetch me a second?

Shantotto appears in Final Fantasy Trading Card Game as Earth-elemental Backup and Forward cards. One card depicts her Final Fantasy XI appearance, one her Dissidia Final Fantasy artwork, and one in her alternate outfit for Dissidia. Shantotto's Manikin, Lady of Antiquity, also appears represented by a card.

Shantotto appears as an opponent and on Triple Triad cards in the version available via the Final Fantasy Portal App. On Easy she uses rules Three Open and Plus. On Normal she uses Chaos. On Hard she uses Same, Plus and Chaos, and the rare five star cards of herself and other Final Fantasy XI characters can be won from her, among other cards. She uses the trading rule One.

In Dragon Quest X, players will be able to meet Shantotto who wound up in the Dragon Quest X world after one of her magical experiments in dimensional travel goes awry. Players can help Shantotto get items like Gysahl Greens for her chocobo.

Shantotto makes an appearance as a card. 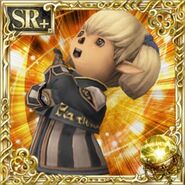 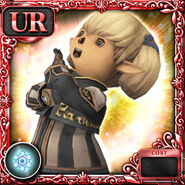 Shantotto appeared as part of the Final Fantasy collaboration. She was first introduced in the collaboration event that occured in the North American version from May 16, 2016 to May 29, 2016. Shantotto's Iridal Staff was an enhance material that was obtainable from the Shadow Lord and could have been used to enhance Shantotto's active skill. 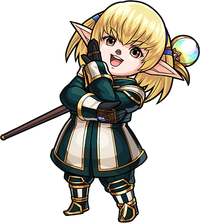 Shantotto appears as part of the 2018 Final Fantasy collaboration.

This section about a character is empty or needs to be expanded. You can help the Final Fantasy Wiki by expanding it.
Final Fantasy Brave Exvius characters
Español
Community content is available under CC-BY-SA unless otherwise noted.
Advertisement