Cid Pollendina: Oh, shut up and help me remodel the Shango page!
Please expand this article into a full one. The following tasks need to be completed:

Master of lightning, Shango commands powers of which the four generals can barely conceive. A giant among men, he stands more than ten feet tall, his imposing figure striking fear in all he faces. His sword techniques are far above and beyond those of the other divine generals.

Shango is one of Divine Generals in Final Fantasy Dimensions.

Shango is large and muscular, standing more than ten feet tall. He wears a set of ragged clothes and armor made of shell. His helmet is shaped like a conch and his arms seem to be sewed.

Shango is arrogant and brutal and takes pride in his strength. He is fearless and unrestrained with showing it. He scorns humans due to his immense power, but has shown some sense of honor and respect towards the Warriors of Light and Darkness. Following his defeat, he admires their strength, and claims he would have liked to get to know them.

Making himself known in Burtgang when he killed Styx for her failure, Shango battles Gawain before striking him down, as he buys time for the Warriors of Light to escape.

Shango later appears to protect the Heliogabalus from the Warriors of Light, where he easily defeats them. However due to Vata's intervention the airship's engine is damaged and he's forced to retreat.

Shango appears later when Sophia unlocks Holy and the Warriors of Light travel to a cavern where they are to acquire a crystal and he has the heroes surrounded with his army, however a Dimensional Shift occurs and he is unsuccessful on his attack as he's teleported with the rest of the world.

When the party arrives at Castle Avalon, Shango awaits them as he guards a half of the Castle's main door and a battle ensues, however as a reward for the Warriors and to a degree a sense of honor he heals them before the battle. He proves to be a mighty opponent but is defeated, and he regrets having not meeting the warriors before while he was human. The revelation greatly surprised the party and after that they left to battle the Emperor, at this time Shango meets his end. 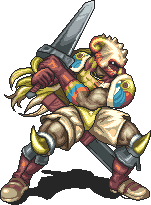 The Electric Image is a lightning-type enemy created in Shango's image.

Shango appears on a card.

Shango is based on the Orisha of thunder and lightning.