Shambling Corpse is an undead/zombie-type enemy in Final Fantasy XII found in the Zertinan Caverns, spawning in great numbers in the area where the Esper Adrammelech is fought. They rarely drop the Platinum Dagger and have the Blood-stained Necklace as a steal and monograph drop, which sells for good gil, and is also needed for making the Nihopalaoa at the bazaar.
See also: Shambling Corpse

Being a congregation of souls, with ties to this world so strong they could not go on to the next. Within this frame, more than a hundred souls reside, forcibly fused into a single being, a single flesh. Each of the souls yearns for what it once had in life, making this horrific creature a violent, twisted thing, wracked with confusion and hatred for the living.

Hear ye, hear ye! Case of the shambling corpse solved! The facts behind the death of a young boy at the hands of a shambling corpse a fortnight past have been uncovered! Upon examination of the zombie, it was found that the necklace it wore belonged to a certain young maiden of which the boy was fond, thereby proving that the shambling corpse was none other than his bonny lass! This blood-stained necklace was apparently a hand-made gift from the victim, though as to why the girl was wearing it when she rose from her early grave, and why she attacked her former love, nothing is known at present.

Shambling Corpses spawn in groups, and they keep appearing if the player moves around the area. They use elemental magick that hits everyone in range and can infect the party with Silence, Blind, Sleep and Slow.

The player can equip party members with the gambit "Foe: undead" along with a White Magick spell, such as Cura, as healing hurts the undead. The Shambling Corpses can be disabled to render them harmless for the time being. During the Adrammelech battle, the Shambling Corpses respawn in deeper areas of the cave, so the deeper the place the player fights Adrammelech, the less the advantage will be. If one enters the area from the north, Adrammelech will most likely be right in front of them. 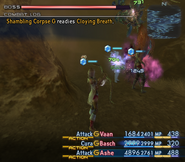 Cloying Breath.
Add a photo to this gallery

The name is a reference to a Final Fantasy VI monster.

Retrieved from "https://finalfantasy.fandom.com/wiki/Shambling_Corpse_(Final_Fantasy_XII)?oldid=3411767"
Community content is available under CC-BY-SA unless otherwise noted.