The Shadow Fox is an all-terrain, multi-purpose vehicle in the Compilation of Final Fantasy VII, its most prominent appearance being in Dirge of Cerberus -Final Fantasy VII-. The truck was developed and used primarily by the World Regenesis Organization and saw great use during the conflict against Deepground.

Unlike most other vehicles seen in the Final Fantasy VII series, the Shadow Fox appears to be powered by hover technology, though no further information is available as to how this was achieved.

The Shadow Fox has a large, extended bed and is outfitted with a steel canopy, providing protection for any cargo it is carrying. The bed itself is large, able to accommodate several soldiers, as well as having two large computers (to be manned by six people) to act as a mobile command center. It is large enough to comfortably house a Gun Turret as well as the Fenrir.

The truck is outfitted with three, large spotlights affixed to a light bar overtop the cab. For combat purposes, the truck (as demonstrated by Tifa and Barret) can be outfitted with six, four-barrel missile pods. 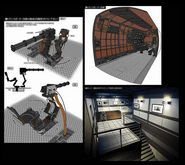