Come forth, my creature of shadow!

The Shadow Dragon does not appear in the 3D versions' bestiary.

-Abilities whose names are not shown when used are highlighted in italics.
Since only Rydia's Mist Dragon can kill the Shadow Dragon, its statistics are unknown in the Bestiary. 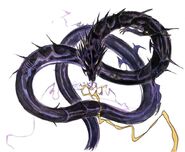 Black Fang (iOS).
Add a photo to this gallery

Retrieved from "https://finalfantasy.fandom.com/wiki/Shadow_Dragon_(Final_Fantasy_IV_3D)?oldid=3412209"
Community content is available under CC-BY-SA unless otherwise noted.