Inside Sin (Garden of Pain)

I will learn to control it, from within. I have all the time in the world. Since you were gracious enough to dispose of Yunalesca... the only means of destroying Sin is forever gone. Now nothing can stop us!

The final battle with Seymour Guado, as Seymour Omnis, is staged inside Sin. Seymour's plan is to gain control of Sin from the inside to wreak havoc on Spira, his pyreflies having been absorbed by Sin.

Inside Sin (Garden of Pain)

Enemy is Tough, Heavy.
Elemental affinities depend on the positioning of the Mortiphasms.

Seymour Omnis hovers in front of four large discs called Mortiphasms. On his turn, he will cast four elemental spells in succession on the player party, targeting each party member once and a random party member for the fourth spell; if any party members are KO'd, Seymour will only cast 2~3 spells. The spells used are determined by which colored section on each disc is closest to Seymour: orange for fire-elemental, purple for ice-elemental, blue for water-elemental, and yellow for lightning-elemental. The spells' strength is also determined by how many of the same color are facing Seymour: if 1~2 elements are aligned, Seymour will cast -ra spells of those elements, and if 3~4 elements are aligned, he will cast -ga spells.

Once Seymour Omnis is attacked six times, he will glow red, indicating his change of strategy. He will cast Dispel on the party, and on his next turn cast Ultima that can potentially exceed 4,000 damage. He then rotates the Mortiphasms so that all four match the next element listed above, and continues with his previous strategy. Once Seymour Omnis falls below 20,000 HP, he will do this after only three attacks. Counterattacks and reflected spells count towards Seymour being attacked. Multiple counterattacks can occur during a single one of Seymour Omnis's turns, so long as his spells deal damage or are blocked by Nul-spells.

Seymour will no longer banish aeons like he did in the previous two encounters, and remarks that even his mother opposes him if Yuna summons Anima.

Although Seymour Omnis's Defense is initially 180, it is reduced to 100 whenever he casts Dispel. When he uses Ultima, it is increased again, but only to 150.

Seymour Omnis's version of Ultima is different from most Ultima spells in Final Fantasy X. It is somewhat weaker, having a damage constant of 64 instead of 70; the damage is only about 89.4% of what a normal Ultima spell at 35 magic would be. This is somewhat made up for by Seymour Omnis's Ultima dealing special damage rather than magical damage, rendering most protective measures useless. It can still be reduced by an aeon's Shield and/or the Focus ability.

Due to a minor glitch, when Seymour Omnis is aligned with two Water elements, he becomes immune to Fire rather than Water. This can even lead to a situation where he is both resistant and immune to Fire. This persists across all versions of the game.

Because the battle opens with the fire element on all four Mortiphasms facing Seymour, one of the first actions should be to rotate one. Physically attacking a Mortiphasm will rotate it counter-clockwise, and using magic will rotate it clockwise. The Mortiphasms, unlike Seymour, are out of range of melee attacks, so only Wakka can attack them physically. With one disc rotated, using Nul-spells will negate all three of Seymour's -ga spells, leaving just the lone -ra spell.

Seymour Omnis has high Defense and Magic Defense, so using Armor Break and Mental Break will make the battle easier. Holy and doublecasting elemental spells that target Seymour's weakness are also effective, although the latter will only work if the player doesn't attack the Mortiphasms. Casting Hastega or using items or Mixes that grant Haste to the party are useful, however, Seymour may Dispel this, so the player would need to reapply it.

The player can let Yuna's aeons do the work: unless Seymour is using Water spells, it is possible to just summon the corresponding elemental aeon who will absorb the spells. Another useful tip is to have Yuna's Overdrive full before the fight, summon Shiva, and use her Overdrive; with Lulu's Venus Crest (found during a second visit to the Farplane) on her Celestial Weapon, Shiva can deal well over 9,999 damage if Yuna is trained.

As Seymour primarily uses elemental magic to attack, it is recommended to equip armor that nullifies or absorbs his spells: the Phantom Bangle for Lulu can be found in the Battle Site, the Phantom Ring for Yuna is found in the Sea of Sorrow, and the Victorious for Rikku is found by inputting the password "VICTORIOUS" on the Fahrenheit.

Another strategy is to use weapons with all four elemental strikes and armor with all four elemental eaters. For example: If Tidus attacks with the Crystal Sword, it will do 1.5x damage when the discs rotate for a certain element, and even if Seymour changes for another element, this will happen due to Seymour always being weak to one element when he changes the discs. With Crystal Shield, all of Seymour's spells will heal Tidus except for Ultima. This strategy with more two more party members will render the player nearly invincible.

By all means, try! You should thank me. Your death means your father's life!

Seymour to Tidus right before the fight begins.

You would oppose me as well? So be it.

Seymour to Anima if she is summoned during the fight.

But there is no salvation for the damned! Rest in peace, in eternal darkness!

Seymour to the group before casting Dispel the first time.

Seymour to the party before casting Ultima.

So it is you, after all, who will send me. But even after I am gone, Spira's sorrow will prevail.

Seymour to Yuna after his final defeat.

"Fight With Seymour" from the HD Remaster

"Fight With Seymour" plays during the battle against Seymour in his Omnis form. In the HD version, it includes some choirs in the background around the late portions of the song. 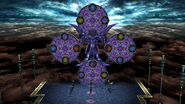 Seymour Omnis and the four Mortiphasms.

Concept art of the reels.

[view · edit · purge]The word omnis means "all" in Latin. Seymour Omnis is called "Seymour éthéré" (Ethereal Seymour) in the French version, "Seymour Omega" in the Spanish and Italian versions, and "Seymor Ultima" in the German version.