Very well. I will give you your death. You seem to want it so.

The second battle with Seymour, in his Seymour Natus form, occurs after the two separated groups escape the Via Purifico and reunite on the Highbridge. Seymour is assisted by a mechanical, hovering creature called Mortibody.

Tidus and Auron can speak to Seymour with Trigger Commands to raise their Strength by 10, while Yuna can raise her Magic Defense by 10.

The Mortibody starts a round by casting a basic elemental spell on the party. Seymour will follow with a Doublecast of that spell's -ra version, targeting two different party members if possible. Occasionally, if there are two active party members and the left-most party member is KO'd, Seymour will only cast one spell.

When Seymour's HP drops below 24,000, he will Protect himself and start using Break on one character. Mortibody will attack with Shattering Claw, and if the Petrification status is active and it targets that character, they will likely shatter, reducing the active party down to two members. Below 12,000 HP, Seymour will cast Flare, inflicting as much as 2,500 damage to one character, albeit delaying his next turn. At this stage, Mortibody will start casting Cura on Seymour.

If an aeon is present, Seymour will use Banish after the aeon's turn to eject it; unlike instant death, aeons are not immune to eject, though the effects are the same. Banish is not used against party members (though if hacked to do so, it functions just like any other ejection attack).

If Mortibody is KO'd, it will revive itself via Mortibsorption by taking HP from Seymour Natus. The amount absorbed and its max HP decreases with subsequent uses: Mortibsorption starts at taking 4,000, then decreases in increments of 1,000 until it caps at 1,000. Mortibody will use Mortibsorption even if it kills Seymour. Interestingly, since the move is considered a fractional damage attack, Seymour temporarily becomes vulnerable to them for the move's duration.

Seymour Natus and Master Tonberry are the only enemies from whom the player can steal the rarest recovery use item, Tetra Elemental.

Seymour is susceptible to Poison, allowing extra damage to rack up quickly. Seymour must be attacked directly to cause his attack pattern to change. Poison damage bringing him under the required value will not alter his pattern until the next time he is attacked, though Mortibsorption will.

Provoking Seymour and casting Reflect on the Provoker bounces back all of his attacks. Equipping SOS Reflect armor works even better, although it is hard to obtain at this point. Putting Reflect on Seymour prevents Protect and Cura from landing on him. Otherwise, Protect can be dispelled.

If using single-target attacks, it's better to focus on Seymour. Summoning an aeon that has a full Overdrive can inflict massive damage, especially thanks to Mortibsorption. However, long-term use of an aeon is not possible in this battle due to Banish. The player can fill up the aeons' Overdrives before the battle and then summon them one by one.

The Mech enemies before the fight provide a respectable amount of AP, making it a decent grinding spot, although Kimahri will miss out.

Once a great summoner and leader of the Guado people, he followed his father as a Maester of Yevon. His calm exterior hides a warped mind, broken by watching his dear mother sacrifice herself to be a fayth...

Seymour Natus appears as a enemy in Battle Music Sequences.

Seymour Natus first appeared in the Challenge Event Marriage of Convenience - Into the Bevelle Palace as the event's final boss. He later appeared in Ultimate Guardian as a mid-boss. Currently, he is the final boss in the Record of the Highbridge.

Contrary to his source material, the player has to avoid attacking the Mortibody, else risking a punishing counter, and just focus on Seymour himself. This is primarily a defensive battle for the party, so attaching Protect and Shell to White Mage-type characters is recommended; and adding Reflect may help to buffer the boss's onslaught of spells. Defeating this boss in the Classic series of each event unlocked Yuna and later Kimahri as player characters. 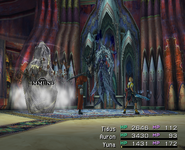 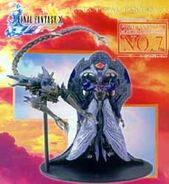 [view · edit · purge]Natus is Latin for "born". This effectively makes the name "Seymour Reborn". He is called "Seymour spectral" in the French version, "Neo Seymour" in the Spanish and Italian versions, and "Seymour Varia" (Variant Seymour) in the German version.