Your hope ends here! And your meaningless existence with it!

The third battle with Seymour, in his Seymour Flux form, occurs after Yuna and her guardians make their way up Mt. Gagazet.

The battle is notorious for being among the hardest non-optional bosses in the game due to Seymour's powerful attacks and his signature attack, Total Annihilation. The theme for the battle is called "Challenge".

Seymour summons Mortiorchis, upon which he sits. As with previous Seymour battles, certain party members may use the Trigger Command to talk to him. For this battle, Kimahri can talk to raise his Strength by 10, and Yuna can talk to raise her Magic Defense by 10.

Like Seymour Natus, Seymour Flux will banish aeons, giving them one turn to attack if summoned. Hellfire, Thor's Hammer, and Delta Attack have alternate animations when used against Seymour Flux, though the latter can't be seen under normal circumstances.

Seymour Flux will immediately cast Protect on himself when falling below 75% HP and Reflect when falling below 50%. He can cast both simultaneously if enough damage is dealt, but will not cast them when taking Poison damage. Likewise, Seymour's attack pattern changes below 50% HP when damaged regularly, where he will now rebound Flare spells at a party member. If Reflect is dispelled, he will damage himself, and recast Reflect on the next turn, and then cast Flare again before restarting the pattern. If Seymour still has Reflect after the initial Flare, he will instead wait on the turn where he recasts Reflect.

Seymour is immune to Breaks, and has greater Magic Defense and physical Defense than the average enemy. Magic, such as the White Magic Holy, or the Black Magic Flare and Ultima, should still do considerable damage due to their high base values. Ultima is also especially useful as it can additionally damage the Mortiorchis. Characters with high Strength or Magic will still do decent damage, no matter the type of attack.

If characters have high Agility or Haste, they can heal zombified allies with Holy Waters before the Mortiorchis can target them with Full-Life, and can easily dispel Seymour after he casts Reflect, causing him to severely damage himself with Flare. To protect against Zombie completely, the player can either equip Blessed armor, which can be bought from Wantz on the mountain or customized onto an armor with Holy Water, or customize Auto-Med, which also requires a small stock of Holy Water.

As Seymour Flux is vulnerable to Poison (the Mortiorchis is immune), he will take 1,400 damage at the end of his turn. Even if he gets two turns in a row and skips the second, he will still take damage from Poison. One way to inflict damage as well as Poison is to use Rikku's Mix and combine a Fire Gem and Soul Spring, or simply use a Poison Fang. Seymour is also vulnerable to Wakka's Silence Buster, which will prevent him from casting Flare, Reflect, Dispel, and Protect, effectively wasting his next turn each time he is silenced. Casting Haste on Seymour will cause him to take damage from Poison more rapidly and disrupt his combination attacks with the Mortiorchis.

When Seymour begins charging Total Annihilation, it is recommended to cast Shell (or Kimahri's Mighty Guard or one of Rikku's "Mighty" Mixes) on the party members with the highest HP and then defend before he executes this. Using Focus five times will also help.

Aeons entering the fight with full Overdrive gauges are a big help, as they can unleash their Overdrives before being banished by Seymour, and Bahamut's Mega Flare can break the damage limit. It is possible to defeat Seymour only by inflicting Poison and using every aeon's Overdrive.

Mixing two Underdog's Secrets (x99 can be obtained from Rin inside the Fahrenheit if the player has fully learned the Al Bhed language), can also break the damage limit. This method is unavailable at this point unless the player can get all all of the Al Bhed Primers from a compilation sphere via another save. Alternatively, completing the Remiem Temple Chocobo Race with three chests grants 30 Wings to Discovery, which can be mixed to get Trio of 9999, which makes the fight trivial when combined with Fire Gems stolen from the Grenades on Mt. Gagazet. 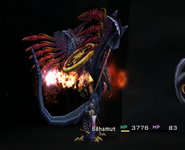 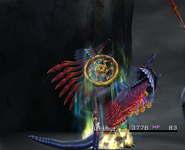 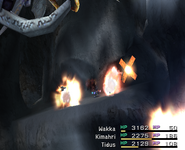 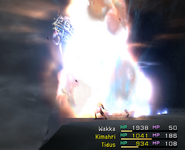