He is the one who sowed the seeds of hatred. He is to blame. But I am at fault for letting him become what he was.

Seymour's mother is a non-player character in Final Fantasy X. She appears to the party to tell them the history behind Seymour Guado, and is not directly named. She had married the leader of Guado and given birth to a son who as a half-human-half-Guado was hoped to bridge tensions in Spira, but Seymour's mother found her son was only shunned by both. She has lived her life in regret that she could not give her son a better life. She has a role in the optional quest to obtain the aeon Anima near endgame.

Seymour's mother had shoulder-length dark hair lightly threaded with gray. She had blue eyes, which Seymour inherited, and dressed in an indigo draped bodice with a straight blue skirt, and a delicate golden chain belt with small teardrop pendants. Her dress was reminiscent of simple Grecian styles. She wore strapped blue-gray heels and split tiered green sleeves edged with pale yellow and a orange chain-link pattern at the top, as well as an elaborate golden necklace and earrings.

Seymour's mother cares for her son and hopes that people will eventually accept him despite his mixed heritage. She came to believe that self-sacrifice was the only way to gain him acceptance from the wider populace. She feels guilty of Seymour having developed a nihilist worldview, blaming herself, but harbors nihilistic ideals herself, ultimately embracing self-destruction.

Seymour's mother is found at the Baaj Temple as the fayth of the aeon Anima. She reveals that in her past life, she was the object of much animosity due her interracial marriage to Lord Jyscal, and to prevent civil war among the Guado she was exiled with her young son, Seymour Guado, to Baaj Island for their own protection. When Seymour demonstrated exceptional talent in the art of summoning, his mother encouraged him to undertake the pilgrimage to Zanarkand and volunteered to serve as his guardian along the way.

Final Fantasy X Ultimania Omega elaborates that Seymour's mother knew she would soon die, and this motivated her to take Seymour to Zanarkand when he was 10 years old. She feared her son would have no place to belong to in Spira, hoping that giving him the chance to defeat Sin would win Seymour acceptance. Seymour's mother knew of the mechanics of the Final Summoning through Jyscal, as the Guado possess their own records that tell of Spira's sealed histories in fragments. Jyscal was aware of Seymour and his mother going to the Zanarkand Ruins, and privately supported it.

When they reached the Zanarkand Ruins, Seymour's mother offered herself up to be turned into the fayth for the Final Summoning. Seymour, devastated, broke off the pilgrimage and returned to Baaj alone. Seymour would not return for his mother's fayth until he was twenty-five. Having finalized his plans, he moved her fayth statue from Zanarkand and sealed it within Baaj Temple.

When Yuna and her guardians visit the ruins of Baaj Temple, they are greeted by Seymour's mother's fayth, who tells the story of Seymour's past and offers Anima's services to Yuna to help her destroy Sin. She holds no ill will towards her son; rather, she blames herself for failing to prepare him for the challenges and pressures that would face him as a summoner and a half-human living among the Guado. Feeling responsible for Seymour's downfall, she views her service to Yuna as her last opportunity to atone for her decisions, to "destroy Sin and her son's obsession with it".

Yuna's journey to save Spira takes her inside Sin where she encounters the unsent Seymour still wanting to find a way to become Sin himself. Yuna and her guardians defeat him, allowing Yuna the chance to finally send him. If Yuna summons Anima against him, Seymour remarks "You would oppose me as well? So be it!" It is unknown though if Seymour is addressing Anima as his former aeon, or as his mother.

Seymour's mother welcomes the chance to be possessed by Yu Yevon in the final battle and then be destroyed by Yuna. 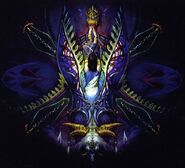 Render of a picture of Jyscal and Seymour's mother.