A favorite after-work hangout for laborers, Tifa's cocktails and cooking are big hits among the neighborhood people. After hours, though, the place turns into a hideout for the anti-Shinra militant group Avalanche.

Seventh Heaven, alternatively spelled 7th Heaven, is a bar and restaurant owned and run by Tifa Lockhart in the Final Fantasy VII series, located in the Sector 7 slums of Midgar. It has served as a home base for many of the games' main characters, specifically in Final Fantasy VII.

A new 7th Heaven was later built in the city of Edge after the fall of Meteor.

Located in the slums of Sector 7 in Midgar, the original Seventh Heaven bar was built by an unnamed carpenter during the events of Crisis Core -Final Fantasy VII-, and named "Seventh Heaven" by Zack Fair during a conversation.[1] It was intended to house an anti-Shinra base from the start.[citation needed]

Tifa Lockhart later became the owner and proprietor of Seventh Heaven. The bar became famous for her food and drinks,[2][3][4] and served as the base of operations for the Barret's Avalanche cell, with a secret elevator disguised as a pinball machine used to reach the headquarters below the bar's main floor. While Barret was out on missions, Tifa would look after his daughter, Marlene Wallace, who would sometimes tell Tifa stories while under Tifa's care.[5] When Barret's team went to destroy Mako Reactor 1, Tifa remained behind in the bar with Marlene.

In "At the Hideout in the Slums", Cloud Strife and Barret returned from their mission. Cloud spoke with Tifa briefly before joining Barret in their secret headquarters below the bar, where Cloud demanded money from Barret. A disagreement caused Cloud to leave, with no intention of returning, until Tifa diffused the conflict by convincing Cloud to stay with them due to the promise he had made to her, and convincing Barret that they still needed Cloud's help.[2] In "To the No. 5 Reactor", Tifa left with Cloud and Barret for their next mission to attack Mako Reactor 5, leaving the bar in the hands of Marlene.[6]

When the Sector 7 pillar in "Prevent the Fall of the Plate", Seventh Heaven was destroyed along with it. Marlene was not in the bar at the time, having been saved by Aerith Gainsborough.[7]

In "Home Sweet Slum", Cloud and Barret returned from the bombing of Mako Reactor 1, and found Tifa there. Tifa showed Cloud to an apartment she had secured for him in Stargazer Heights,[8] and after the two completed tasks around the Sector 7 slums the next day, they returned to the bar where Tifa made Cloud two cocktails, including her house special, the Cosmo Canyon. Cloud was not permitted access to the headquarters downstairs, wherein Barret's cell decided not to rehire Cloud, and not to take Tifa along to their next mission to attack Mako Reactor 5. Once the meeting concluded, the cell celebrated in the bar, and Cloud left.[3]

The next day, in "Mad Dash", the bar was attacked by the Whispers on the eve of Avalanche's second bombing mission. Avalanche try to defend the bar, but the Whispers dispersed after Jessie Rasberry was hurt. As such, Barret changed course, rehired Cloud, and brought Tifa along to the next mission to Mako Reactor 5, with Wedge staying behind at the bar to look after Marlene and the injured Jessie.[9]

In "Fight for Survival", while Cloud and Tifa fought through the Sector 7 pillar, Aerith went to find Marlene, having known Tifa would have asked this of her beforehand.[10] Aerith found Marlene inside and connected with her quickly, before Tseng of the Turks arrived and struck a deal with Aerith. The bar was destroyed when the Turks dropped the Sector 7 pillar; later, in "A Broken World", Cloud, Barret, and Tifa found the ruins of the bar.

The final scene of Final Fantasy VII Remake depicts the bar is amid the locals reconstructing the slums, propping up the broken Seventh Heaven bar sign.

Seventh Heaven is a Texan-style bar and restaurant, and is a large, wooden building located in the western end of the Sector 7 slums. It stands in contrast to the surrounding buildings in Sector 7's slums, which are made primarily of metal plates. The main floor of Seventh Heaven is the bar and restaurant, while a secret elevator near the pinball machine leads down to the basement where Barret's Avalanche cell's headquarters are located.

The bar and restaurant area is the main floor where customers are served food and drinks. The bar is designed primarily with wooden tables, benches, and stools. At the back is a bar containing several drinks, and a small kitchen area off to the side. A jukebox and pinball machine occupy one corner, while a dartboard occupies another. while a television screen is located on the wall behind the bar. Neon-lit signs around the walls advertise the menu.[note 1] 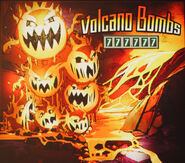 The basement in Final Fantasy VII is a small concrete room, which houses mapping and communication facilities, a computer hub, a television screen, and training equipment. At the center is a large table, where plans are written on paper, as well as on the whiteboard nearby.

Seventh Heaven serves food and drink, cooked and prepared by Tifa, which made the bar famous around the slums for their quality.[2][3][4] The food is taste-tested by Wedge.[2] Neon signs give clues as to the items it serves: a neon sign in Final Fantasy VII reads "Draft beer", while in Final Fantasy VII Remake, the signs read "Eggs & Chips" and "Pizza". Furthermore, in Final Fantasy VII, soda bottles and a beer glass can be seen on the tables.

Tifa also serves cocktails at the bar, two of which she served to Cloud. One is the popular "Seventh Heaven", a yellow drink that "packs a serious punch and gives you the courage to keep going". Another is the red cocktail "Cosmo Canyon", the house special, inspired by the location of the same name.[3][note 2] Other drinks on the menu include a green cocktail called "Lifestream". When preparing drinks, she performs tricks with the shaker, her showmanship used to garners higher tips from patrons.[12] The cocktails Tifa pours for Cloud come out clear, even if she used a shaker to mix them.

The area is visited briefly for story objectives wherein the player talks to other characters. The player can visit both the main floor of the bar and the underground. 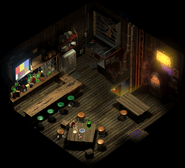 Bar and restaurant area in the original Final Fantasy VII.

Field model of the pinball machine in Final Fantasy VII.

In "Home Sweet Slum", the player can use the jukebox to play the music they have collected, and partake in a darts minigame (see below). The jukebox already has

Tifa's Theme. In "Mad Dash" and "Fight for Survival", it is only visited briefly. Unlike Final Fantasy VII, the player can only visit the bar's main floor.

The player can play darts during "Home Sweet Slum", after the others take the lift down to the secret basement in the quest "Talking Strategy". Finishing in seven or fewer moves earns a trophy and a

Luck Up Materia (Wedge will gift it later). The plater can start with aiming to Triple-20 to score 60 points per throw.

Before setting out to destroy the Mako Reactor 5, the background music to Seventh Heaven is "Tifa's Theme" (ティファのテーマ, Tifa no Tēma?). After Cloud decides to take up one more job and destroy the reactor, "Barret's Theme" (バレットのテーマ, Baretto no Tēma?) replaces Tifa's as Seventh Heaven's theme.

There are also several allusions to the bar's name. In Dissidia 012 Final Fantasy, Tifa's most powerful exclusive weapon, "Seventh Heaven", is named after the bar. In the fighting game Ehrgeiz: God Bless the Ring, Tifa uses an attack named after the bar.

It appears the early designs for Seventh Heaven for the original game were later used for a generic pub in Junon. The "Making Of" bonus disc included with Final Fantasy VII International includes a pre-release shot of the Junon pub where Cloud uses lines he says in Seventh Heaven in the final game. The Junon pub also appeared in a GameFan article written nine months before the release of Final Fantasy VII, which suggests it was originally planned to be a more important location than it ended up being in the final game. Comparing the layout of the Junon pub to the Beginner's Hall in Junon suggests that the underground level of the Beginner's Hall may have been the original Avalanche hideout, situated below the Seventh Heaven bar.

Pre-release shots of the area also reveal what changes were made to the Seventh Heaven bar during development. The pinball machine was part of the background in the early version of the area, but was likely turned into a 3D object for simplicity's sake. Different graphics for the TV screens in Seventh Heaven also have been spotted in pre-release images; while in the final game the TV reader looks like a cartoon character, in the early versions the newsreader appears as a real photo of a person. The TV behind the bar is never used in the final game, but dummied dialogue files suggest that a conversation between Tifa and Cloud while watching the news was once planned for the game.

Background in the original game. 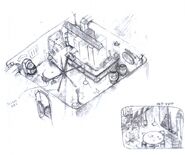 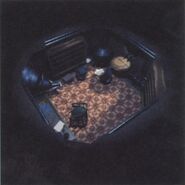 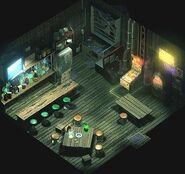 Early version with the pinball machine part of the background and a different TV screen. 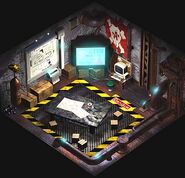 Early version of the basement with a different TV screen.

In Final Fantasy VII Remake, the picture above the door is of the Seventh Heaven from the original game.

Text on a sign outside the bar and on the doormat in the original game appears to read "Tyfer Bar." "Tyfer" is likely a transliteration.

In Final Fantasy VII, the sign at the top of the bar in Midgar reads TEXAS COWBOY CLUB. The neon sign on Seventh Heaven reads TYFER BAR. "Tyfer Bar" is likely a transliteration of Tifa's Japanese name into English by a graphic artist unaware or prior to the official transliteration. Inside the bar the welcome mat also reads TYFER BAR and there are neon signs on the walls saying TEXAS and DRAFT BEER. Notably, there is no "Texas" in the world of Final Fantasy VII, but "Lockhart" is the name of a city in the real life state of Texas, United States. Tifa was also dressed as a cowgirl in the flashback to Nibelheim, and cowgirls are often associated with Texas.

Zack's slogan for the bar in Crisis Core -Final Fantasy VII- was "Seventh Heaven! A slice of heaven in Sector 7!".[citation needed]

[view · edit · purge]In religious or mythological cosmology, the seven heavens refer to the seven divisions of the Heaven, the abode of immortal beings, or the visible sky, the expanse containing the Sun, Moon and the stars. This concept dates back to ancient Mesopotamian religions and similar concept is also found in some Indian religions such as Hinduism, and in some Abrahamic religions such as Judaism, Islam and Catholicism.

The number 7 in Biblical references symbolically represents perfect completion. The number also has a significance in Quranic numerology.

The number seven occurs numerous times in Final Fantasy VII as an allusion; e.g. Avalanche is based on Sector 7, the Shinra Building has 70 floors, there is a status called All Lucky 7s; the bar Seventh Heaven follows with the other allusions to the number.