A gambling vagabond who finds freedom from society's narrow views of morality aboard his airship, the Blackjack...

Setzer Gabbiani is a playable character in Final Fantasy VI. He is a Gambler who lives on the wild side and owns the world's only privately owned airship: the Blackjack.

Setzer thrives on risk taking, and uses his airship to aid the Returners after joining them. In the SNES translation, he is neutral at the beginning of the war, reluctant to openly oppose the Gestahlian Empire after having made profits from their work. In the GBA translation (also used in subsequent releases), which is more faithful to the original, he is convinced to join the rebellion because the Empire has been bad for his business. Setzer has a happy-go-lucky attitude, and is likable upfront, but haunted by past losses from which he distracts himself by gambling.

Setzer's ability is Slot, which triggers various effects based on the three slot reels that it lands on, which the player stops one by one. He can convert this to Gil Toss by equipping the Heiji's Jitte relic. Setzer equips Gambler's items as a weapon, and the Fixed Dice when combined with Master's Scroll can potentially deal huge damage.

Setzer is a man in his late twenties. He has long silver hair, violet eyes, and wears several layers of clothing under a black trench coat with a gold lining, though the in-game sprite shows the lining as brown. He is roughly average height, and thin. Setzer's face is scarred, though this is not visible in his game sprites until the mobile version. Setzer with his scars is the first character of the series to bear visible physical disfigurements. The extent of his scars vary: in Yoshitaka Amano artwork and an FMV in Final Fantasy Anthology where his skin is very pale, they are white and noticeable; in chibi artwork and Kingdom Hearts II where his skin is similar to his in-game color, they blend in with his skin.

Setzer cannot resist a gamble; he thrives on risks—such as his planned abduction of Maria—and never passes up an opportunity to prove his skill. Most of his scars come from gambling sessions gone wrong, although some also come from airship accidents.[3]

There are aspects of Setzer's character that fit the "ladies' man" archetype, such as his willingness to gamble his airship for Celes Chere's hand in marriage, which were exaggerated in his Kingdom Hearts appearance. Setzer acts like a happy and likable person up front, but is still hurt by a great loss and distracts himself with gambling. His dream is to create the fastest airship in the world, in ode to the death of his friend and rival.

Setzer was a gambler by nature and pilot by trade. When younger, he was involved with a girl named Darill who owned the airship Falcon. She was aware of her risk-taking nature as she casually mentioned to Setzer the Falcon was his if she ever was unable to fly. Setzer, mortified by the idea, said no such thing would ever happen, and that he would only take the Falcon after having won it fairly. After a day of flying Darill went out on her own and pushed the Falcon to its limits. The ship crashed in a distant valley, and when Setzer found the remains he entombed them beneath the sea.

Shell-shocked by the loss, Setzer impressed his desires upon a wealthy opera star named Maria. The pinnacle of his infatuation comes when he threatens to kidnap her amid of a performance. He plans to disrupt the show of Opera "Maria and Draco" but Locke Cole and his party are desperate for an airship, and so together with the Impresario foil Setzer's plan by having Celes Chere star in the night's show instead of Maria. Setzer abducts Celes, Locke follows him back to the Blackjack, and the party seeks to negotiate for the airship.

Setzer is disappointed upon finding Celes is not Maria, but soon finds Celes to be more attractive. Celes borrows Edgar's double-headed coin to broker a deal: if it landed on heads, Setzer would help the Returners reach the Southern Continent to rescue Maduin and the other espers; if it was tails, Celes would agree to be Setzer's "woman" (the Japanese term refers to a woman that receives gifts from her man in exchange for physical favors). Amused, Setzer agrees, but realizes he has been duped. Setzer's inherent good nature, coupled by being impressed by the trick, makes him pliant to the idea and he helps the Returners.

While the others infiltrate the Magitek Research Facility Setzer stays on the airship. When the others do not return, he goes to Vector to check on them and meets them as they are fleeing the city and rings them onto the Blackjack to escape. The ship is damaged in the attack and later, Setzer accompanies them to Zozo to save Terra Branford.

Following the trip to Zozo Setzer accompanies the party to Narshe where the elder joins with the Returners. Terra agrees to ask the freed espers to limit their devastation to Vector, after which a coalition of Returners and Narshe guards would storm from the north. The plan is a success, and Emperor Gestahl appears to have surrendered. He asks Terra to convince the espers to negotiate peace and she and Locke head to Crescent Island to convey the Emperor's message. Setzer and the others doubt the Emperor and stay in Vector to judge his motives.

Setzer and Cid Del Norte Marguez, the Empire's researcher on magic and espers, rebuild the airship while Edgar uses his charms to learn the Emperor's true plans from a maidservant, who says the Emperor plans to capture the espers. The party flies to Thamasa to warn Terra and Locke, but they are too late. Kefka has acquired more magicite and used it to revive the Warring Triad and turn the Esper World into the Floating Continent.

The party apprehends Kefka and Gestahl on the floating island but Kefka kills the Emperor and moves the Warring Triad out of alignment. The party escapes on the Blackjack, but the imbalance caused by the disturbing of the Warring Triad's alignment shifts the very face of the earth and the airship is torn apart, separating everyone.

One year after the cataclysm, with no wings to fly and nowhere to go, Setzer is wasting his life away in a bar in Kohlingen. Celes, Edgar, and Sabin happen upon him and ask him to rejoin their fight against Kefka. Setzer is initially unwilling, having lost a sense of purpose for his life, but Celes's words convince him. Setzer takes them to Darill's Tomb to unearth the Falcon where he shares Darill's story with the party, and as the Falcon rises to the skies Setzer finally buries his grief.

After Kefka has been felled and the party is fleeing the crumbling Kefka's Tower, Setzer saves two of his fellow Returners by telling them which of two doors is unsafe and about to explode. He initially tosses a coin which indicates one door, but tells them to take the other one instead. The door indicated by the coin explodes shortly thereafter. Setzer lingers for a moment, reminiscing about how Darill once told him that "whenever you think you're right, you're wrong", an instinct that made him decide to not trust the coin toss. If Locke was not re-recruited into the party, Setzer saves Celes from the collapsing floor portion, telling her that he can't let her die because Celes promised to perform as Maria again. Celes exclaims the item she dropped, Locke's bandanna, is a good-luck-charm that helped her find her resolve.

When Terra's esper power fades with magic disappearing from the world and she falls from the sky, Setzer pilots the Falcon to catch her proclaiming the Falcon is the fastest ship in the world.

Setzer is a Gambler. His special ability is Slot, which can have various damaging or healing effects based on the slots outcome. If he equips the Heiji's Jitte relic, Slots becomes Gil Toss, which allows Setzer to damage all enemies at the cost of gil. His Strength, Stamina, Magic Defense and Speed, are average, his Defense is high and his Magic is low. He can equip most heavy armor, and wields Gambler's items, weapons which have random effects in the damage they deal. Most notable of this is the Fixed Dice, whose damage is not halved by Master's Scroll, making it possible to potentially deal four hits of 9,999 with no risk of being evaded. His Desperation Attack is Red Card that deals magical damage to one enemy. 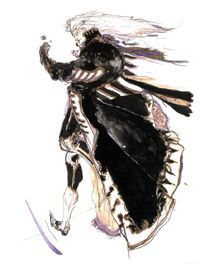 After it was decided Final Fantasy VI would feature an ensemble cast with no clear main protagonist, everyone in the development team was encouraged to provide ideas for characters and their episodes. Setzer's character and story were colored by influence from Tetsuya Nomura.[4]

According to the "Chocobo's FF Laboratory" feature published in V Jump in 1993, the character of Faris Scherwiz from Final Fantasy V was originally a female gambler named Eva Scherwil. The developers encountered difficulties in making her fit in the game's world and atmosphere, and changed her into a pirate. In a later issue of V Jump, the developers noted Setzer evolved from an abandoned concept for Final Fantasy V.[5] Nomura had had jobs in mind for Final Fantasy V, such as a ninja with a dog, and a gambler who fought with dice and cards, among others. These ideas were not used for Final Fantasy V, but when work started on Final Fantasy VI, they were used for Shadow and Setzer.[6]

A rarely-noticed fact about Setzer is that in the Japanese version he joins the party with a Bandana equipped although he cannot equip them (if removed he cannot reequip it). This is not a bug, but was meant to be an inside joke showing Setzer's vanity does not allow him to wear the same things as Locke. In the GBA version Setzer does not come with a Bandana, as the porting team possibly thought it was a glitch.[5][7]

Setzer is likely based on the concept of bakuto, itinerant gamblers in Japan from the 18th century to the mid-20th century who were one of the forerunners of the modern Japanese crime gangs known as yakuza. Bakuto plied their trade in feudal Japan, playing traditional games such as hanafuda and dice and were mostly social outcasts who lived outside the laws and norms of society.

Setzer's theme is built off C major, a grand fanfare that plays as the background music for the cabins underneath both airships. His leitmotif is reprised in A major in "Epitaph", which plays during his reminiscence of Darill, and in C major again in the ending theme, "Balance is Restored". In addition to his character reprisal in the "Ending Theme", Setzer's theme is reprised during the first half of the ending credits.

The theme is included in Theatrhythm Final Fantasy Compilation Album.

Setzer Gabbiani has appeared in the following games throughout the Final Fantasy series:

Setzer has made key guest appearances in the following non-Final Fantasy games:

Square released pencil toppers and key chains in 1994 with the cast of Final Fantasy VI. Among them was merchandise featuring Setzer. These products were available in vending machines. Setzer's key chain features his in-game sprite design.

[view · edit · purge]Setzer may allude to the German word setzen, meaning "to bet on something". Alternately, it may be a corruption of "César", a name whose variants are found throughout certain European countries, including Spain, Italy, and Portugal. "César" itself is derived from Latin Caesar. a title of nobility in the Roman Empire.

[view · edit · purge]Gabbiani is the Italian word for "seagulls", but also is similar to the Italian verb gabbare, meaning "to trick, to cheat".