She is three years younger than Lightning and is Snow's fiancée. Quite opposite to her elder sister, Serah exudes an air that makes others want to protect her—but her heart is as firm and true as Lightning's is. Still, her curiosity leads her to disaster as she is first branded as a Pulse l'Cie and then imprisoned by the fal'Cie.

Serah appears in the iOS version as a purchasable character. She is the sole character representing Final Fantasy XIII-2, and appears in her main attire.

Though everyone else believes Lightning to be dead, Serah alone remembers the smile her sister gave her that day three years ago when Cocoon was saved. So she sets off across time and space with Noel to find her sister.

Serah is a playable character, and the main representative of Final Fantasy XIII-2. She is available from the start by transferring save data from the second demo. If the player did not select her among their party of four, or download the demo, she can later be unlocked by collecting Indigo Crystal Shards.

She is a Spell and Treasure oriented character. Her Limit, Ultima Arrow, deals damage in proportion to her Magic and Luck. 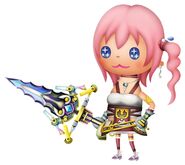