Serah appeared as a recruitable character. She is of the Visitor race and has Time traveler as her main job. Her attack is Faerie's Bow and her ability is Ultima Arrow.

Serah is a playable character.

She is three years younger than Lightning and is Snow's fiancée. Quite opposite to her elder sister, Serah exudes an air that makes others want to protect her—but her heart is as firm and true as Lightning's is. Still, her curiosity leads her to disaster as she is first branded as a Pulse l'Cie and then imprisoned by the fal'Cie.

Serah appears in the iOS version as a purchasable character. She is the sole character representing Final Fantasy XIII-2, and appears in her main attire.

Though everyone else believes Lightning to be dead, Serah alone remembers the smile her sister gave her that day three years ago when Cocoon was saved. So she sets off across time and space with Noel to find her sister.

Serah is a playable character, and is the main representative of Final Fantasy XIII-2. She is available from the start by transferring save data from the second demo. If the player did not select her among their party of four, or download the demo, she can later be unlocked by collecting Indigo Crystal Shards.

Serah appears as a playable character. Her initial weapon is the Starseeker.

Serah is a playable character who could be initially recruited the Challenge Event Dangerous Beauty as the First Time Reward for completing the event's Mah'habara stage in Part 1.

Serah is mentioned as living in the same village as Snow following his brief exchange with Lightning. She is one of the new characters announced for the expansion World of Final Fantasy Maxima, which was hinted in the Who's Who entry for Snow. 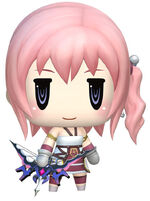 An Extraordinary Soul
During Reynn and Lann's adventures, Serah was only a name uttered by her beloved Snow, but she would later become somewhat involved in the tales of Zack and Hauyn. Even more so than the other Mediums, Serah's original soul had been charged with an extraordinary destiny, which would suggest that a quiet life is not in the cards for her. But Serah's kindness and positive outlook will surely find light in the darkness, no matter what the future holds for Grymoire.

Serah is also a collectible Kingdom Hearts mascot cellphone strap appearing alongside the other characters of Final Fantasy XIII.

Retrieved from "https://finalfantasy.fandom.com/wiki/Serah_Farron/Other_appearances?oldid=3237372"
Community content is available under CC-BY-SA unless otherwise noted.