Serah is a playable character in Final Fantasy XIII-2. She can be considered the main playable character, as she is the one the player starts with in the main story, and there is a segment where Noel is not in the party. If the two main player characters, Serah and Noel, become knocked out, it is Game Over. Serah prioritizes magical abilities and fights with a bow that can transform into a sword.

Serah is the default party leader to be used in battle and on the field, but the party leader can be changed on-the-fly. On the field, the main character can jump and use Mog's abilities. Serah has an agile fighting style, jumping while firing her bow, and performing backflips, demonstrating a fighting style similar to her sister Lightning. She can summon and command monsters via the Paradigm Pack system. Her victory pose is to revert her weapon into Mog, who pops up into the air, and she catches him in her arms.

Each paradigm role can attain level 99 and the Crystaria and there are twenty-two stages at each a bonus is selected. Serah has the superior Magic growth and Noel has the superior HP and Strength growth. There are two types of node spheres: small and large. Small spheres in the same positions tend to give similar stat bonuses on each playthrough, while the large nodes are role-sensitive.

Serah starts with the Commando, Ravager, and Sentinel roles, and majors in Ravager and Saboteur. As a Commando, she learns siphon abilities that boost ATB gauge refill, as opposed to Noel's abilities that give him a boost when in low and high HP respectively. When Serah attempts to launch a staggered enemy with a melee attack, she stabs the sword into the enemy dealing low damage and then slashes the blade upwards, launching the target. Much like her sister Lightning, Serah will also jump back and shoot an enemy when the Attack command is used as the last command queue with four or more ATB segments.

As a Ravager, she specializes in Fire and Lightning magic as opposed to Noel's Ice and Wind. She also learns passive abilities in this role, whereas Noel doesn't, to increase chain bonus. Serah's full ATB skill is Ultima Arrow, a Ravager skill that quickly fills the target's chain gauge with a barrage of attacks. As a Sentinel, she learns Steelguard, which grows increasingly effective the more she is attacked while defending, and her counterattack skill is Vendetta that deals more damage the more damage she receives while defending, as opposed to Noel's Mediguard (that slowly recovers HP while guarding) and Entrench (that empowers his counterattack the longer he has defended).

As a Saboteur, Serah learns numerous spells and their area-of-effect versions, as well as a passive ability that extends the duration of a target's existing status ailment by five seconds once new debuffs are inflicted. She is a good Medic, even if she can't learn Cura and Curaja, due to her high Magic stat and faster casting speed than Noel. Serah is not as proficient Synergist as Noel, as she lacks the area-of-effect spells for that role and the Boon passive ability.

The true form of Serah's bowsword is her moogle companion, Mog, but she still always has her weapon even if Mog is missing due to story reasons. Depending on what form she has Mog assume and the target's distance, she will use the appropriate model of bowsword: the bow for ranged combat, and the sword for melee. As a Commando, when the paradigm is set to "Cross", Serah mainly uses her weapon as a sword. Serah's original weapon, the Starseeker, has an inscription in Etro's script that translates to: The light that pierces the enveloping gloom of time and illuminates the truth. 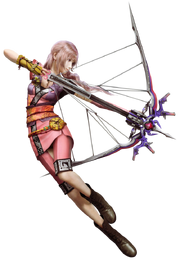