Serafie is a playable Mirage in World of Final Fantasy. She is charged with managing the Prism Case for the Mirage Keepers Lann and Reynn.

Serafie is a winged pixie with orange-pink hair. She can be seen carrying a watering can to water flowers in Plaza 99.

Serafie seems to have a nonchalant attitude to the things happening around here. She enjoys playing tricks on Tama, for example pouring water from the watering can on Tama's head.

Notes: Undetectably excited / Refuses to enthuse / Supposedly everyone's favorite pixie / Flies / Watering can / "How did that get there?" / Keeps cards close to her chest

Longtime Friends
Beneath that laid-back drawl is...well, a really laid-back pixie. Like Tama, Serafie and Enna Kros go way, way back, to before Enna Kros became a god. Consequently, she and Tama have just as long a history.

Rumor Radar
Using her special powers, Serafie can gather up gossip of all kinds: near and far, old and new, silly and serious. Don't let your definition of "rumor" cloud you, though. If someone has said it, even whispered it at some point, Serafie can reach through time to yoink (as she might say) that nugget of hearsay into the present. That's power to get excited about, even if she doesn't show it.

Nothing to Sniff At
Serafie has an eidetic memory, and her wealth of knowledge comprises things she has heard in myriad worlds throughout the ages. One could argue there is nothing she doesn't know. While she has been known to work incredible miracles with this knowledge, she seems to have largely ceased using it, perhaps to shield her mind from such abnormal quantities of information. She limits herself to perfunctory cognitive tasks, and dusts off her data banks in only the rarest of situations. If it seems like she's just floating through life, that's why. So the good news is, she can answer any question. The bad news is that you might die waiting.

When Tama sacrifices her nine lives in order to rewind time in order to prevent Lann's sacrifice, her role in events in the altered timeline is replaced by Serafie, who handles all duties that Tama handled in addition to her normal duties. However, the party is eventually able to restore Tama after consulting with the Girl Who Forgot Her Name. Afterwards, the original roles of both characters are restored in the timeline and Serafie asks the Girl to not make her "fill in for that lazy Tama anymore."

Serafie can be found in Plaza 99 of Nine Wood Hills with Tama, occasionally with items or Murkrifts on her head. In addition to managing the player's prismariums, the player can also use a Seraphone to access the Prism Case remotely, though only three can be held in the inventory at a time. Serafie also provides hints from her Rumor Radar to help the player progress through the story.

In Chapter 1, Serafie provides a prismarium containing a Sylph to the player after talking to Chocolatte for the first time.

If the player has not yet revived Tama by bringing the Kyubi's Souls to the Girl Who Forgot Her Name in the Postscript, Serafie takes the place of Tama in the battle dialogues of any Intervention quests that involve the latter.

Once the player recruits all seven of the Plead and revives Tama in the Postscript, Serafie will only allow the player to fight the final bosses. The player will not be able to use the Prism Case or collect any of Serafie's items by talking to her directly until after every intervention quest is cleared and the final boss is defeated.

Upon starting the Postscript, "Turn Those Corners Up", Serafie becomes a playable Mirage in place of Tama.

Serafie can be fought as an enemy in the Maxima version, after clearing the Postscript. She can be fought alongside Enna Kros and Tama in a superboss battle at Nine Bean Coffee, and can also be fought in the Coliseum alongside Tama and both their transfigured forms.

You here to manage your prismariums?

I can see that you need my services.

My, what lovely weather we never stop having.

Hey, if no one else here is up to the task of saving the world, I will. Yup.

Just between us, I've heard... that the chocobo on Chocolatte's head is the real her...
Ha, just kidding!

Much like me, the Prism Case will mature over time. Something to look forward to.

A little heads-up there: the Prism Case can only hold so much, so watch your capacity. Because if you let the case overflow then...let's...just...say...
nothing at all 'cause I don't wanna scare you.

When selecting "What's that on your head?"

There was some girl here the other day looking for you two. I didn't recognize her, but she was holding a teacup?
Anyway, she said you two have been given "the power to touch the souls of many," so you should stop by and visit her at your earliest convenience.
Oh, but, uh...sorry, she didn't leave an address.

When talking to Serafie at the beginning of the Postscript

Serafie is featured with Tama on the image for Lann & Reynn's armor Mirage Charms.

Serafie makes an appearance in Kingdom Hearts Union χ[Cross] as an obtainable headgear with Reynn. 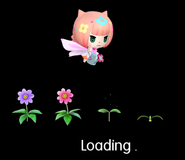 Serafie and Tama in their usual spot at Plaza 99.

Serafie mocks Lann for not noticing Tama was on his head.

Explaining that she finds them sometimes on her walks.

Grants permission to the twins to take whatever's on her head. 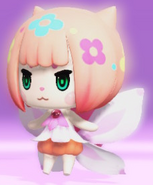 Serafie as she appears in the Mirage Manual. 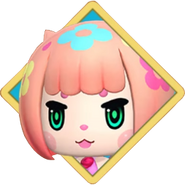 Serafie is derived from "seraph." [view · edit · purge]A seraph, the singular of seraphim, is one of a class of celestial beings mentioned once in the Hebrew Bible (Tanakh or Old Testament), in the Book of Isaiah. Later Jewish imagery perceived them as having human form, and in that way they passed into the ranks of Christian angels, where they represent the highest rank of angels. They are traditionally depicted with three pairs of wings, from a description given in Isaiah: "With two, they covered their faces; with two, they covered their feet; and with two, they flew."