Once a member of SOLDIER and well-respected hero of Shinra, Sephiroth changed when he learned he was himself an experimental construct. He plots to destroy the planet out of his deep hatred for humanity.

Sephiroth is a capable fighter with excellent physical stats plus high Speed, making him well-suited to the role of a Samurai in battle. An early downfall of Sephiroth in this game is that the katana was a semi-rare weapon type, and that he cannot equip swords, meaning that he may not reach his fullest potential without a little luck in a Relic Draw. His Soul Break repertoire is one of the more lethal sets, as many of his early Soul breaks target all foes at once, and his base Attack stat is 288, the highest of any character at level 99, just above Orlandeau (287) and Dark Knight Cecil (217).

His default Soul Break is Oblivion which at the expense of one Soul Gauge segment delivers a lightning-quick sword slash to all enemies dealing damage equal to 110% damage potency of a conventional attack.

Japanese event banner for "Of Shinra and Legends".

Global event banner for "Of Shinra and Legends". 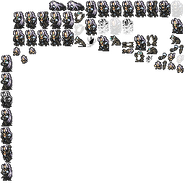