A 2D sprite of Sephiroth, modeled after style sprites, occasionally appears in the loading section of the Final Fantasy Anthology port. 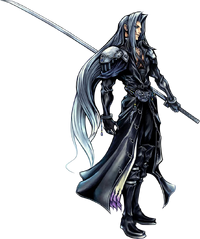 Sephiroth appears as a Warrior of Chaos and stands as the antagonist representing Final Fantasy VII, opposing Cloud Strife.

Sephiroth stands apart from the other antagonists, acting to manipulate and trick Cloud on his own. Though the other villains do not understand why, Sephiroth had killed himself in a previous cycle of the war and as a result begins to remember things the others have forgotten, believing he has found the secret to ultimate power and knowledge beyond their scope. Alongside his manipulations of Cloud, Sephiroth aspires to attain this power for himself and survive the destruction of Cosmos and Chaos to become a god. He is ultimately defeated by Cloud, and fades away, although not before telling Cloud he will return as long as Cloud "remains the way he is".

His alternate form is his shirtless appearance seen in the last boss battle against him in Final Fantasy VII. Sephiroth's strongest weapon in Dissidia Final Fantasy is called One-Winged Angel, after his musical theme.

Sephiroth returns as a Warrior of Chaos alongside all the other characters from the original. He plays a minor role seeking to recover more memories of his home by fighting. When Kefka tells him memories return faster when one fights someone from the same world as them, Sephiroth challenges Tifa. Cloud intervenes on Tifa's behalf and defeats Sephiroth, causing him to retreat. In an unseen scene mentioned in his Museum profile, Sephiroth kills himself at the end of the twelfth cycle to see if he is truly "Sephiroth", or merely a manikin infused with the real Sephiroth's memories.

In his second alternate outfit, Sephiroth appears as he does in his original Tetsuya Nomura artwork with a simpler coat and different hairstyle. As a bonus fourth outfit available for download, Sephiroth wears his Kingdom Hearts coat and bears a differently designed wing. 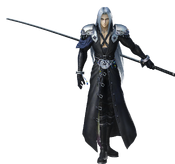 Sephiroth is a playable character and a representative of Final Fantasy VII.

Sephiroth appears as a playable character. He is an attacker, slicing through his enemies with his katana dealing large amount of BRV, in his two abilities: "Fervant Blow" and "Octaslash". He is obtainable in the character event "One-Winged Angel".

A legendary SOLDIER and war hero who learns that he was artificially created as an experiment of Shinra Inc. and turns on both the company and humanity. Defying even the strongest of Cloud's attacks and refusing to return to the Planet, he intends to let loose the ultimate destructive magic and have his vengeance on the world.

Tied with Kain for the highest raw strength, Sephiroth possesses an extra ability slot and a variety of magic attacks to accommodate his equally high magic. While he lacks a limit break, Sephiroth's useful abilities and essentially double offensive power make him one of the best party members to use in battle stages.

Sephiroth is an unlockable character, unlocked by collecting Black Crystal Shards. He is an Offense and Spell oriented type character. His manikin counterpart from Dissidia Final Fantasy appears as an enemy. 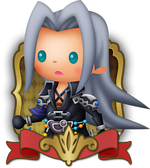 Sephiroth is an ally, a summonable Legend and a boss depicted in his default Final Fantasy VII outfit. His abilities are Draw Slash, Octaslash, Oblivion, Scintilla and Hell's Gate. His EX ability is Sudden Cruelty.

Sephiroth will occasionally appear during the battles against Jenova-DEATH and Jenova-SYNTHESIS. When he appears, Sephiroth performs Oblivion and ejects a party member from the battle.

Scintilla (CR+).
Add a photo to this gallery

Scintilla (CR+).
Add a photo to this gallery

Sephiroth appears as a boss during select Final Fantasy VII Remake crossovers, and is an Ultimate Hero available to the player via lottery draw.

The Ultimate job was released as a supreme summoned job during the Final Fantasy VII Remake event in February 2018 along side with the Legend Warrior-type job titled Hero of Despair that gave the character a similar appearance to Sephiroth with Fire, Water and Dark Elemental affinities, its respective auto-abilities and unique ultimate skill.

Similar to other ultimate jobs, Sephiroth is a re-skin for any of the Warrior-type jobs selected adopting their respective elemental affinities with a change to the ultimate skill as well as 3 additional auto-abilities.

His Ultimate is Octaslash ∞. Sephiroth dashes toward the enemy, unleashing a flurry of slashes that break all targets on the final blow, inflicting various debuffs to enemies struck, granting the player a buff to warrior-type abilities and converting stocked Element Orbs to Prismatic. 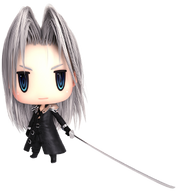 Sephiroth appears as a summonable day one DLC Champion. When summoned, he appears surrounded by flames, reminiscent of the Nibelheim Incident, then rises up into the air, covered in formulas ranging in complexity to the area of a circle, to equations that appear to be from celestial mechanics and relativity, similar to Super Nova. Sephiroth then unleashes the spell upon the player's enemies, thereafter landing on his feet and walking away amidst the flames, echoing his exit during the Nibelheim Incident.

Sephiroth is considered an anti-Champion who brings about chaos and destruction in his wake. He possesses the ability to travel to and from Grymoire and many other worlds at his own discretion. Cloud searches for Sephiroth obsessively, to the point that he was willing to risk the lives of his own companions just for a chance at revenge.

Reference to the burning of Nibelheim.
Add a photo to this gallery

Trading card depicting Sephiroth before the flames of Nibelheim.

Trading card of the Imaginary Champion.

Theatrhythm Final Fantasy
Add a photo to this gallery

Sephiroth.
Add a photo to this gallery 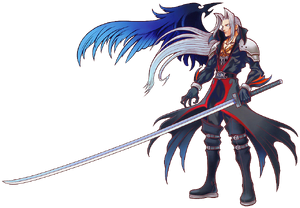 Sephiroth appears as an optional boss and Cloud's arch-rival. It is implied this incarnation of Sephiroth is the physical embodiment of Cloud's dark memories, and as such cannot be permanently killed, as he implies Cloud has beaten him at least once before. Sephiroth attacks with sword combos, pillars of fire, meteors, and orbs of dark energy, and is commonly considered to be one of the hardest bosses in the series. Owing to his being the physical embodiment of Cloud's darkness, his face is noted to be the same as Cloud's in the Kingdom Hearts franchise.

In the original Kingdom Hearts, Sephiroth, under the title "Platinum Match", challenges Sora in the Olympus Coliseum, and in Final Mix after their fight, Cloud appears and the two do battle, though the end result is not shown. Sora will receive the One-Winged Angel Keyblade, modeled after Sephiroth's Masamune, after defeating him in Final Mix. It should be noted that Sephiroth was some of the select bosses who first appeared in the localized release of the first game, and was added to the original Japan-exclusive Final Mix version as a result. Sephiroth was not voiced in Japanese in the first game until the Japanese 1.5 HD ReMix due to the original Final Mix game having only English voices with Japanese subtitles. Also in the first game, Sephiroth's render and in-game model are oddly right-handed.

In Kingdom Hearts II, Sephiroth appears during the siege on Hollow Bastion looking for Cloud and later saves him from a horde of Heartless. After slaying the MCP, he can be found in the Dark Depths. Sephiroth is intrigued by Sora's Keyblade, and challenges him to test its powers and faithfulness to him. Afterwards, Sephiroth shrugs off the defeat, and implies Cloud is the only one who stands a chance at defeating him. He orders Sora to tell Cloud where to find him, leading to a second confrontation between the two. Both of their battles end with the two vanishing in flashes of light to places unknown. In this game, Sephiroth's model is consistently left-handed like with all his other portrayals.

Kingdom Hearts Union χ[Cross]
Add a photo to this gallery

Sephiroth render.
Add a photo to this gallery

Sephiroth appears alongside other Final Fantasy VII characters. Sephiroth is controllable both in his fully-dressed appearance and his shirtless appearance. He fights mostly with his fists, but can also do sword-draw attacks and various combos with the Masamune, as well as use a variation of Meteorain, Cloud's Limit Break in Final Fantasy VII.

Sephiroth's fighting style is based on Paul Phoenix's fighting style, Hybrid Martial Arts, as he uses one of his basic combo attacks, but also gains Ken's Demon Scissors. Like Cloud, Sephiroth's unique ability is to wield his Masamune as he deals double damage to his opponent in every three slashes. He relies on his Masumune to wipe out his opponents in both offensive and defensive attacks, and has a move where he grabs his opponent's neck and stabs to the opponent's chest for critical damage in a similar move used to kill Aerith in Final Fantasy VII. The way he wields the Masamune is left-handed. During charge, Sephiroth uses Cloud's Limit Break, Meteorain. His exclusive win animation is different than his victory pose in Final Fantasy VII as a temporary playable character: Sephiroth says "Hmph!" before slashing his Masamune thrice and assuming his fighting stance.

Sepiroth's in-game model.
Add a photo to this gallery

Sephiroth and his Masamune appeared as part of the Final Fantasy collaboration. The collaboration event happened in the North American version from November 2, 2015 to November 15, 2015.

Sephiroth appears as part of the Final Fantasy collaboration.

Sephiroth has appeared in the Final Fantasy Dissidia Collaboration event as a befriendable Rank SSS Yo-kai of the Tough Tribe.

This section is empty or needs to be expanded. You can help the Final Fantasy Wiki by expanding it.
Final Fantasy VII characters
Final Fantasy VII: On the Way to a Smile
Hoshi o Meguru Otome
World of Final Fantasy characters
Retrieved from "https://finalfantasy.fandom.com/wiki/Sephiroth/Other_appearances?oldid=3248821"
Community content is available under CC-BY-SA unless otherwise noted.