Sephiroth's default outfit is "Operative of Legend", an updated version of his original Dissidia Final Fantasy appearance. Its first alternate coloration is based on Messam Elmdore from Final Fantasy Tactics, who in turn was based on Sephiroth, and recolors Sephiroth's hair white, and his sash both under his coat and right pauldron red. The second alternate coloration is based on Genesis Rhapsodos (

) from Crisis Core -Final Fantasy VII-, another character whose appearance was based on Sephiroth's, and recolors his sashes black and his coat maroon.

His first alternate costume is "One-Winged Angel", an updated version of his "Kingdom Hearts Gear" DLC outfit from Dissidia 012. His hair is based on his Kingdom Hearts II design, while his single black and blue wing is retained, due to EX Mode being reworked into EX Skill. The first alternate coloration of this costume colors the inlay of his coat silver, his chest belt brown, the wing design on his wrists fuchsia, and his large black wing with a fuchsia gradient on the feathers. The second alternate coloration recolors his chest belt black, the inlay of his coat and wing design on his wrists gold, and his large wing with a golden gradient on the feathers. 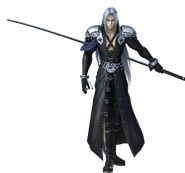 Operative of Legend I. 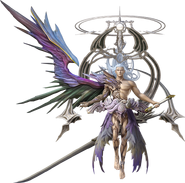 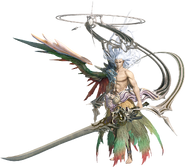 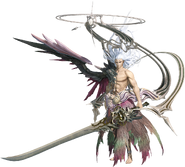 Sephiroth recognizes the threat of the planesgorgers early on, but conceals it from the warriors of Materia. His rivalry towards Cloud is toned down and he even points to him that their respective groups will need to form an alliance to deal with the threat.

Sephiroth equips katanas and greatswords. His alternate weapons have not appeared in the Final Fantasy series prior, and are original designs for Sephiroth in the Dissidia series.

His default weapon is the Masamune, his iconic weapon from Final Fantasy VII, which is slightly shorter than it was in the PlayStation Portable Dissidia games. His first alternate weapon is the Mako Katana, an industrial blade that bears the Shinra logo and a Mako glow on the guard. This weapon is based on the time Sephiroth was employed by Shinra, and resembles the blades wielded by Weiss in Dirge of Cerberus -Final Fantasy VII-. Sephiroth's second alternate weapon is the Cetra Blade, a large saber with a more ornate black and white blade, and a handguard resembling black feathers, commonly associated with Sephiroth. It is named after the Ancients he initially believed to be descended from, and is similar in design to Genesis Rhapsodos's rapier. His third alternate weapon is the Second Coming, a sword with a unique wavy and jagged gold blade, with the guard featuring a snake eye at its center. It is named in reference to the initial days of the Jenova War upon his supposed return, as well as to his god complex. The snake eye on the guard and wavy blade refer to the Midgar Zolom encountered during the party's pursuit of Sephiroth. His fourth alternate weapon is the Essence Shard, which was designed to resemble Safer·Sephiroth's wing-arm, with the area between the handle and the blade featuring an angellic halo. 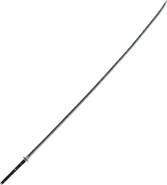 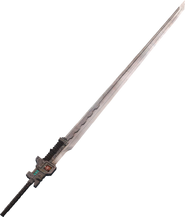 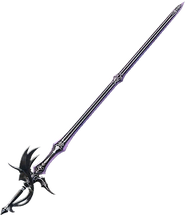 Sephiroth is among the villains summoned by Spiritus for the new war. Shantotto stumbles upon him with the Cloud of Darkness and Kefka heading to meet Spiritus. In response to Cloud of Darkness's retort that Kefka "never changes" in regards to his glee at death and doom, Sephiroth says beings like Kefka thrive in the ensuing chaos.

Sephiroth attempts to ambush Bartz while the latter fights Exdeath (none are aware that Materia and Spiritus had summoned them back). His attack is blocked by Cloud, with Sephiroth acknowledging his rival has indeed returned to the conflict. As the planesgorgers arrive Exdeath deduces this was Sephiroth's plan. Cloud charges at Sephiroth and demands to know what he did. Sephiroth departs with Exdeath, leaving a cryptic hint to Cloud that "soon, [the warriors of Spiritus and Materia's] goals will align", citing they'll meet again once they do.

Sephiroth aligns with the Emperor to find summons, and duels with Terra Branford at Midgar. After subduing her, he attempts to finish her off, but a hail of spells sent by Kuja forces him to back off. After Kuja heals her, the two, along with Zidane, fight Sephiroth and the Emperor. They are interrupted by planesgorgers, with Sephiroth remarking their conflict has "awakened the beast" and retreats at the Emperor's command.

True to Sephiroth's predictions, the warriors of Materia and Spiritus call a truce to stop Shinryu and stage a mock battle to draw the dragon into the open. Sephiroth fights Lightning among raining rubble, knocking her gunblade away, although Noctis retrieves it and returns it to her. Once Shinryu finally awakens, Sephiroth joins in the final assault against the dragon god, and bests him. With the battle over, Sephiroth departs to his homeworld, leaving behind a crystal imbued with his essence for Spiritus to use in his place.

at the right time after a Bravery attack will allow Sephiroth to perform a dash cancel with less startup.
EX Skill: Jenova - Creates an aura around Sephiroth that slows down any affected enemies. 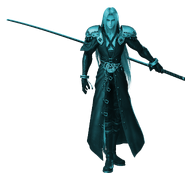 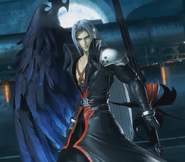 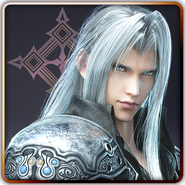