A coldhearted former hero who wields an extremely long sword.

A legendary member of SOLDIER once revered as a hero.

Sephiroth is a warrior of Chaos in Dissidia Final Fantasy and Dissidia 012 Final Fantasy. He is a legendary SOLDIER operative who wields an impossibly long blade with great ease. One day, he discovered the secrets of his past and went insane. In battle, he combines long reach with swift swordplay that crushes opponents in the blink of an eye. Standing apart from the other antagonists, Sephiroth has little interest in either destroying the world or ruling it, working towards a separate goal. His immediate desire is to face his archrival, Cloud, whose emotions he manipulates to force him into battle, sometimes for no reason other than to fight him. 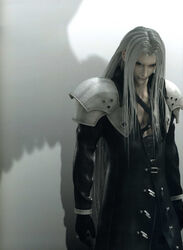 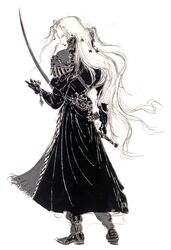 ); his belt is ornate and decorated with beads, he wears a bracelet with similar beads on his right wrist, and his pauldrons have a different design. He wears white and lavender sashes under his coat, both a reference to Amano's design and to his wings ( 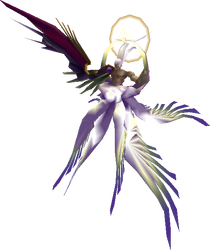 Sephiroth's first alternate outfit, "Executioner", is based on his appearance ( 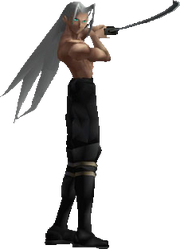 ) in the final scripted battle in Final Fantasy VII, leaving him shirtless with black pants being colored lighter than the original.

Sephiroth's second alternate outfit, "Custom Coat", is based on his Tetsuya Nomura artwork ( 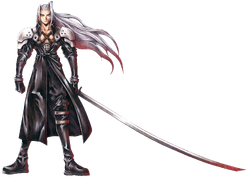 ) for Final Fantasy VII. He wears a less elaborate coat with no sashes or beads, a different belt with the original SOLDIER logo, differently styled bangs and different pauldrons.

Like Cloud and Squall, Sephiroth's DLC outfit, "Kingdom Hearts Gear", is his appearance ( 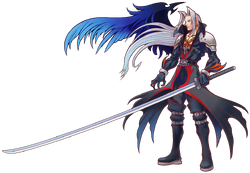 ) from the first Kingdom Hearts. Sephiroth's coat flares out behind him and has a tattered appearance. The linings of his coat are red, and he has red wing-like protrusions from his wrists. His hair and pauldrons are styled in the same manner as his Final Fantasy VII alt outfit, and he has a higher collar. Sephiroth's wing, which is always present in Kingdom Hearts, is only present in his EX Mode, and is dark blue and black with a stylized design. This outfit is available for download on the PlayStation Store.

As disorder grows in strength, I seem to be regaining my memory. I once took my own life... Perhaps to find a lasting truth beyond this world's illusions.

Much like his appearance in the Compilation of Final Fantasy VII, Sephiroth is calm and detached. He is disinterested in the battle between Cosmos and Chaos, preferring to only fight to test the other warriors (with the exception of Cloud), and work toward his own goals. Sephiroth is insightful, aware of Golbez's true intentions, and knowing of his own nature as a tool in the cycles of war.

In Dissidia Final Fantasy Cecil Harvey notes sorrow in Sephiroth's eyes. Whenever he is defeated, Sephiroth seems to accept defeat, as he always calmly remarks, "I'll fall into the shadows,". When he is defeated by the Warrior of Light, he asks if the Warrior participates in the war because he enjoys battle, implying Sephiroth himself enjoys it. This is reinforced in Dissidia 012 Final Fantasy when Kefka mentions that Sephiroth was made for combat.

In Dissidia 012, Sephiroth does not possess many memories, and desires to fight Cloud to regain them. To his frustration, he cannot do so due to the warriors of Chaos forbidding him to fight against one another. Under Kefka's guidance he attacks Tifa, though disappointed she does not remember him. Following Cloud's intervention, he swears that he will have his revenge regardless of their circumstances.

Treachery of the Gods Edit

At an unknown point in the cycles of battle, Sephiroth ended up joining the fray. Although formally a member of Chaos's faction, Sephiroth has no interest in the battle between chaos and harmony, and instead only cares for regaining his memories. In Prologus, Sephiroth is the third warrior of Chaos whom Lightning and the Warrior of Light face. He asks the Cloud of Darkness to lend some of her powers in the battle, stating that he has some interest in her abilities. After the battle, he comments to the two warriors of Cosmos that they did not give it their all. He advises them to put up a good fight next time, as otherwise there is no meaning for them to exist in the world they are in.

During the war, Kefka comes across Sephiroth and tells him that as the warriors fight, their lost memories return to them, and they return faster when fighting someone from their own world. As Sephiroth is forbidden to fight Cloud since he is a warrior of Chaos as well, Kefka suggests he attack Tifa. Because Cloud remembers her, he may intervene, and Sephiroth will have reason to dispatch both of them and recover his memories.

Also remembering Tifa, Sephiroth defeats her, recovering many of his memories, but realizes there are still more to obtain. He pities Tifa when he deduces she does not remember him. Cloud arrives, having been alerted to the battle by Kefka, and attacks Sephiroth who prepares to kill Tifa. Though Sephiroth is defeated, he escapes, telling Cloud he will return to take his life in return for his betrayal later.

Light to All Edit

During the previous cycle of war, Sephiroth took his own life in front of the Emperor. Though the other servants of Chaos do not understand why, Sephiroth did this to regain his full memories, as well as to find out if he was just a manikin with his memories, or the real deal (he later confirms he is indeed the real Sephiroth). As a result, Sephiroth remembers his ties to Cloud and goads him into taking the path he chooses for him to take. To that end, Sephiroth attacks his allies Tidus, Cecil, and Firion, and steals Firion's rose.

Firion pursues Sephiroth to the Planet's Core, losing to him before the Warrior of Light arrives and sends him back to Cecil and Tidus while he battles Sephiroth. Although the Warrior defeats Sephiroth, he is unable to subdue him, making the latter realize that Cloud is the one meant to defeat him. Sephiroth questions the Warrior's reason for fighting—to end the war—and accuses him of finding pleasure in the fighting as he does. Sensing Cloud is near, Sephiroth leaves to meet with him.

Sephiroth approaches Cloud and prepares to battle him, but Cloud refuses to fight, claiming a battle would be pointless. Sephiroth asks if Cloud would fight him if he had a reason, and shows him Firion's rose. Worried about what Sephiroth has done to his friends, Cloud follows Sephiroth to the Planet's Core. Sephiroth tells Cloud he acts like he wants a reason for fighting, but makes no effort to find such a reason, which is why he eagerly accepts the motivations and reasons of others as his own. Accusing Cloud of being a puppet who cannot act on his own, Sephiroth offers to continue to give Cloud reasons to fight, which Cloud refuses. The two battle, and Cloud defeats Sephiroth and finds his Crystal. Sephiroth warns that taking the Crystal will mean Cloud will continue to be drawn into a battle, a fate he accepts. Sephiroth departs, telling Cloud he will always pull his strings, and to remember Cloud only obtained his Crystal with Sephiroth's guidance.

Later, the Emperor and Ultimecia offer Sephiroth a role in their plan to rule existence. Sephiroth refuses, and leaves when the two turn their attention to the spying Bartz nearby.

After Cosmos is destroyed, and with Chaos's power growing, Sephiroth comes across an idea: to merge soul with the core of the world as Chaos begins to destroy them, and become a god. Cloud and Sephiroth confront each other again, Sephiroth telling Cloud he is infected by a disease—hope. Cloud says it is something he must endure to keep going and the two battle. Cloud prevails and insists he is no longer tied to Sephiroth. Sephiroth vanishes in a flash of light, telling Cloud that his shadow is burned into his heart, and he will continue to return as long as Cloud is who he is. He has fully regained his memories, which motivate his final actions, although it is left unclear whether he intended to end the war for good, or if he wanted to ensure a continuation of the cycles of war.

Sephiroth is the focus of two official quests. "Sephiroth's Quest 012: The Hero's Memory" focuses on Sephiroth's actions in the twelfth cycle after his battles with Cloud and Tifa. Now remembering Jenova as his "mother" and the concept of the Lifestream, Sephiroth thinks the cycle of war is similar, as the slain warriors are purified and reborn in the next cycle without memories. Sephiroth suspects that there could be numerous other warriors in past cycles who were not revived, and when he learns of the origins of the manikins, wonders if this is the fate of such warriors. Sephiroth kills himself, represented by him fighting another Sephiroth, and fades away wondering what fate awaits him in the next cycle, if he will be reborn or cast aside as useless.

In "Sephiroth's Quest 013: Shape of the World", Sephiroth awakens in the thirteenth cycle. Despite being purified of his memories like the other defeated warriors, he retains a weak grasp of the events of the previous cycle, remembering Cloud as a warrior of Chaos who was reluctant to fight. Informed that his archrival has switched sides to fight for Cosmos, Sephiroth attacks Firion, Cecil, and Tidus to steal Firion's wild rose, planning to use it to goad Cloud into fighting him again.

Sephiroth uses a Focused Blade style, bombarding his enemies with swift sword attacks that often use links similar to "just frame" or one-frame links seen in other fighting games. His Bravery attacks hit multiple times with a single button press, and hitting

again will continue the combo. Pressing it too soon prevents Sephiroth from finishing the first strike before moving on to the second, mitigating overall damage. Timing is crucial to maximizing Sephiroth's power. When properly timed his melee strikes are powerful, though even then, he lacks ranged capabilities. Sephiroth's ground speed is fairly fast, but he is not as fast as other characters. His HP attacks are versatile and hit over a wide area around him, but are weaker at long range.

In Dissidia, Sephiroth is fought in Destiny Odyssey I and VII, Shade Impulse, Distant Glory, and Inward Chaos.

In Dissidia 012, he is fought in Report #5, Beyond Doubt, Champions of her Will, and Conclusion of the Cycle chapters of Story Mode.

See also: Gameplay changes between Dissidia and Dissidia 012 for Sephiroth

Sephiroth's EX Mode is Reunion, in which he gains a single black wing over his right shoulder as seen in Advent Children and the Kingdom Hearts series. In EX Mode Sephiroth gains the abilities "Glide" and "Heartless Angel". Glide lets Sephiroth fly through the air by holding

, while Heartless Angel is a special attack usable by holding

. The attack has a long charge time, but if successful it instantly saps the opponent's Bravery to one. The attack will not work if Sephiroth is inflicted with Break status when the attack finishes charging, but it will ignore protective summon effects like Demon Wall or Alexander. In which, with the latter summon, Heartless Angel will force the opponent to have a Bravery freeze of 1.

Sephiroth's EX Burst is Super Nova. The player must repeatedly tap circle to fill the Limit meter. Successfully filling the meter will have Sephiroth slash his opponent towards the sun, and as it grows to giant size, the opponent is consumed into a hellish inferno while Sephiroth stands in front of the screen posing during the "Nibelheim Incident". Failing to fill the meter will have Sephiroth perform a normal sword slash.

Sephiroth can equip Katanas, Spears, Shields, Gauntlets, Helms, Light Armor, and Heavy Armor. In Dissidia 012, Sephiroth can no longer equip Spears, but he can equip Greatswords and Chestplates.