I am the end and the beginning! By my touch shall your wretched lives be blessed!

Sephirot, the Fiend is a primal from Final Fantasy XIV, who appears in version 3.2, "The Gears of Change". He is one of the Warring Triad.

Sephirot was created near the end of the Third Astral Era by the collective faith of a tree-like race from a tree that they revered in Meracydia to repel invaders from the Allagan Empire. Though powerful, Sephirot was captured and imprisoned with his fellow Warring Triad in Azys Lla, where advanced Allagan technology drains his power while keeping his physical form intact. The Allagans learned Sephirot can induce growth in both himself and other living organisms, using it created many of their bio-engineered creatures. After the Allagan Empire fell, the Warring Triad remained in suspended animation for centuries until the actions of Archbishop Thordan VII weakened their seals with Sephirot the first to nearly escape imprisonment.

Guided by Unukalhai, the Warrior of Light and Krile venture to Containment Bay S1T7 to unseal and defeat Sephirot before he can escape and unleash unthinkable catastrophe. After the group wins, Unukalhai tells Sephirot's history before giving the warrior an Allagan tomestone containing data on Sephirot as he existed during the Third Astral Era. Using the tomestone at a terminal in Azys Lla will create a simulation battle based on this data, allowing one to experience a fight against Sephirot at his full strength.

Sephirot and the other two deities of the Warring Triad are based on their Final Fantasy VI counterparts. Sephirot himself was inspired by the Fiend. His name was taken from the working name he was initially given before simply being called Fiend in Final Fantasy VI.

Rearranged "Battle to the Death"

A rearranged version of "Battle to the Death" from Final Fantasy VI plays in the first phase of the battle against Sephirot.

The second part of the fight has a new theme, called "Fiend", that starts playing when Sephirot uses Ein Sof Ohr, his signature attack. It resembles "When Worlds Collide" by the American rock band Powerman 5000. After the track was released along with version 3.2, Powerman 5000's band leader Spider One posted on the band's official Facebook, criticizing the theme, claiming that it is a "straight up rip-off" and not just using their song as an inspiration[1].

Director Naoki Yoshida stated that he has been made aware of an allegation regarding similarities between these songs, but states that the track is ultimately "simply another song in the industrial rock genre, which is a popular genre that can be further divided into numerous sub-genres and countless songs from these genres have been released worldwide". Composer Masayoshi Soken also stated to Yoshida that he was unaware of "When Worlds Collide" while working on this Final Fantasy XIV track.[2]

The statue of Sephirot, the Fiend in Azys Lla

The Warrior of Light encounters Sephirot.

Life Force
Add a photo to this gallery

In the original concept artwork ( 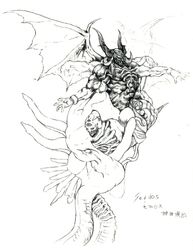 ) for Fiend from Final Fantasy VI by Tetsuya Nomura—upon which Sephirot is based on—Fiend is called Sefilos (セフィロス, Sefirosu?), the kana of which are meant to be spelled as "Sephiroth".

The creature's name is spelled "セフィロト" in kana and "Sephirot" in English to help distinguish it from the Final Fantasy VII antagonist, who inherited the originally "unused" name from Final Fantasy VI.