White Mage: Life's refreshing breeze, blow in energy! Cure!
This article can be improved in areas such as standardize the page so it deals only with Sentinel as an active ability, not as a job or passive ability.
Please refer to the Manual of Style or editing help to get started. 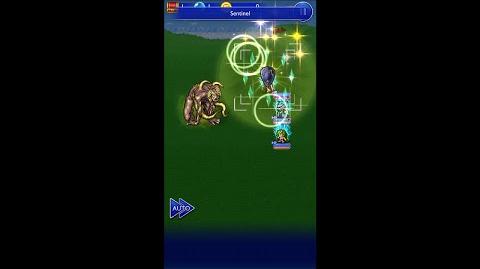 Turn your crystal energy into armor, nullifying up to half your maximum HP's worth of damage.

Sentinel (鉄壁, Teppeki?, lit. Iron Wall) is a defensive ability in the Final Fantasy series. While similar to Defend, it gains a unique property in Final Fantasy XI.

Sentinel is a Special ability found near the end of Auron's section of the Sphere Grid. It is an improved version of Guard, with the user taking a defensive stance, thus receiving less damage from the attack.

Take less physical damage until the next turn.

Sentinel is available on the Warrior dressphere, costing 20 AP. The user remains immobile until their ATB bar refills and all physical attacks cause only 1 HP damage, but full damage is still taken from magic.

Sentinel is available to Paladins at level 30. When this ability is activated the user receives a 90% damage reduction and enmity comparable to Provoke is generated. The damage reduction steadily decays to 40%, whereupon the effect wears off. Enmity for all actions appears to be doubled while Sentinel is in effect. Usage of this ability will instantly produce an amount of enmity comparable to that of a Provoke. While this ability is in effect, the amount of enmity generated by other abilities, such as spells or Shield Bash, is increased. Testing suggests that the total enmity increase while Sentinel is active is equivalent to +100%, the maximum amount of additional enmity possible. It has a recast time of 5 minutes and a duration of 30 seconds.

The leg armor, Valor Leggings, when used in conjunction with Sentinel, give an extra 10% damage reduction, resulting in 100% damage reduction when the ability is used. This steadily decays to 50% damage reduction at the end of the duration. When combined with equipment that reduces physical damage, the damage reduction from the equipment is applied separately (e.g., while Sentinel is active and the Paladin has an Earth Staff equipped, if he or she is hit by 1000 Needles, it will be reduced by 90% to 100 Damage, then the remaining damage would be reduced by an additional 20% bringing the total damage to 80).

Guardian is a job trait that can be purchased with Merit Points by level 75+ Paladins. This job trait is always active, and reduces enmity decay while Sentinel is active. An enemy's enmity towards a player naturally decays over time, when the enemy hits the player, and when the enemy hits the player; Guardian reduces that natural enmity decay for the 30 seconds that Sentinel is active.

It begins by helping the Paladin retain 19% more enmity during Sentinel, and each additional merit placed in Guardian will increase the effect by an additional 19%. Up to 5 merits can be placed in this ability for a total of 95% of enmity decay prevented during Sentinel. This trait is rarely merited because it only takes effect for 30 seconds at a time, and at most, once every 5 minutes.

Sentinel learned by reaching level 38 in the Gladiator class, Sentinel is an ability that reduces damage taken by 40% when used, with a duration of 10 seconds, making it best suited against heavy attacks. It has a recast time of 180 seconds.

Sentinel grants the user a large defense bonus and draws both physical and black magic attacks to them. While specifically named after Cecil's Unique Soul Break, other abilities that grant the same effect are called Sentinel. High Sentinel adds magic resistance as well.

Sentinel is a sword skill that creates a temporary barrier that absorbs damage up to 50% of the user's maximum HP.

Sentinel is an upgraded version of Cover, it has considerably higher activation rate and 50% damage reduction. It is learned by Cecil, Warrior of Light, Rasler, and Libertus. 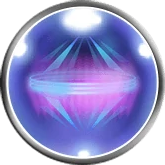