I cannot forgive any who endanger the peace of Windurst.

Semih Lafihna (セミ・ラフィーナ, Semi Rafīna?) is a non-playable Mithra Ranger in Final Fantasy XI. She is captain of the Federation of Windurst's Sibyl Guards, a secretive unit closely tied to the Star Sibyl herself. It is rumored that Semih will become the next chieftainess of Windurst's Mithra.

Semih Lafihna was a child during the Crystal War. Her mother traveled to Mindartia as one of many Mithra Mercenaries hired to defend Windurst against the Yagudo Theomilitary. As Semih was too young to be left alone and the Federation was in danger of being overrun, she was delivered to Jeuno for safekeeping.

Some time after the Battle of Windurst, Semih's twinstone earring, a bauble which distinguishes Mithran mother-daughter pairs, was exchanged with another. She was then carried to Heaven's Tower in Windurst and added to a group of Mithra children already assembling there. These girls had all been orphaned in the recent fighting and the Star Sibyl had committed to raising them within the Great Star Tree itself. The children's names and parentage were collected so that the information could be shared with the Mithran homeland. Only Semih's parents were unrecorded.

Over the next twenty years the orphans became the Sibyl Guard. Semih Lafihna, the best among them, became their leader and the Star Sibyl's right hand. As a force nurtured by Heaven's Tower for the defense of Heaven's Tower, they were trusted with a variety of national security issues. They sometimes found themselves disrespected by other Mithra, however, as they had been raised by Tarutaru rather than traditional huntresses.

Semih Lafihna is given leave to investigate a strange creature called the bearer of darkness that has been spotted around Vana'diel. She follows word of the shadowy entity to Ranguemont Pass, where a San d'Orian knight claimed to have cut it with his blade. Unable to find evidence of this encounter, she continues to Jugner Forest to interview a merchant who also reported a sighting.

While exploring the forest Semih meets a messenger from Windurst. This envoy provides not only a sample of glittering sand from the bearer of darkness but also a twinstone earring sent by Chieftainess Perih Vashai. Puzzled by this second item, Semih is suddenly confronted by Sin Hunter Shikaree M. The tracker claims that Semih is the daughter of Nhev Befrathi, a former chieftainess sentenced to death for her sins, and therefore subject to execution herself. Shikaree cites Semih's adoption by Heaven's Tower, unrecorded parents, and apparent last-minute effort to swap earrings as proof of her guilt. To drive the point home she releases a trio of king's tear moths, which are naturally drawn to sinners.

The moths ignore Semih and Shikaree M finds herself in an awkward position. Apologizing tersely, the hunter parts ways with the increasingly perplexed Sibyl Guard. With some trace of the bearer of darkness already in hand, Semih decides to return home and consult Chieftainess Vashai.

She arrives to see the Sin Hunter parting the chieftainess' company. Speaking as a keeper of the peace, Semih demands to know if the sinner's daughter still lives and whether Perih Vashai had concealed her from the trackers' justice. The elder Mithra is uncooperative, however, and Semih takes the opportunity to assert that she has no interest in becoming chieftainess if Perih is found guilty.

As word spreads that Shikaree M also searches for the Bow of Light and that Perih Vashai may be keeping the cursed weapon for herself, Semih discusses the matter with her fellow Sibyl Guards. All of them remember the bow being used to save them during the Crystal War. Heaven's Tower had adopted them in part to control the spread of information about the weapon. Semih has no recollection of these events, however, instead recalling only that her twinstone earring had once been switched.

Having almost convinced herself that she is the sinner's daughter, Semih again interrogates Chieftainess Vashai. Perih swears that Semih has drawn the wrong conclusion. Conceding that the guard captain deserves an answer, the chieftainess directs her to a witness in Mhaura that can tell her about the twinstone earring which she had earlier received by messenger.

Hastening to the Buburimu Peninsula, Semih learns that the delivered earring was the one that had been taken from her as a child. Her mother had given her own earring to the sinner's daughter to help the girl escape and had Semih's matching trinket removed. The witness then tells Semih to seek the other half of her earring in the Northlands.

In Xarcabard, Semih finds a strangely glowing arrow stuck in a monster and suspects that the Bow of Light may be nearby. While peering into a cave she is nearly struck by a similar arrow from the darkness. Semih returns fire and her unseen target recognizes the style of her arrow as belonging to Perih Vashai's tribe. The assailant then reveals herself as Syu Befrathi, the sinner's daughter.

Syu explains that Windurst's chieftainess had helped her escape to the Northlands with the Bow of Light so that the Sin Hunters might never find them. It had been Nhev Befrathi's intention to return the cursed weapon to the land where the magicite at its core had originated. Syu had not only complied with this wish but also managed to separate the magicite from the bow. She gives Semih the disabled weapon in the interest of placating the Sin Hunters. She also surrenders the twinstone earring she had been given during the Crystal War. The earring matches Semih's original.

Semih delivers the Bow of Light to a pleased Shikaree M, who immediately set outs for the Mithran homeland. The Sibyl Guard then turns to Perih Vashai, who expresses regret at erasing the existence of her own daughter to save Syu Befrathi. Having at last confirmed the chieftainess to be her mother, Semih finds herself momentarily lost for words. With her duties awaiting her, Semih simply promises to visit Perih again and departs.

The guard captain soon finds herself increasingly frustrated by the reckless antics of Orastery Minister Ajido-Marujido. He runs off with a valuable text, attempts to sneak past her subordinates in Heaven's Tower, and even conducts a private audience with the Yagudo king. As a result Semih has the minister closely followed. Eventually he is caught breaking into the Full Moon Fountain, the most strictly forbidden location in the Federation. With the Star Sibyl's permission Semih takes Ajido-Marujido into custody, confiscates his ministry ring, and imprisons him in a dungeon that drains magical powers.

Containing the rogue minister is only one of many problems facing the Sibyl Guard, however. Semih therefore turns her attention to the hostile Cardians roaming the Horutoto Ruins. She attempts to eradicate them herself but has the misfortune of encountering their Aces. These powerful automatons easily capture Semih and ramble on about their glorious leader while deciding how to deal with her. When an adventurer comes looking for the guard captain the Aces elect to start killing before any additional reinforcements arrive.

The homicidal Cardians suspend the assault when their so-called king, Joker, unexpectedly intervenes. He knows that the adventurer has come as part of Doctor Shantotto's plan to rescue Ajido-Marujido and orders Semih to relinquish the ring she carries. Joker then advises her to defend the Star Sibyl from the bearer of darkness and sets the befuddled Windurstians free.

The bearer of darkness soon appears in Heaven's Tower and seals itself and the Star Sibyl inside her chambers. Unable to force the door open, Semih hurries to the dungeon to seek Ajido-Marujido's aid. He is already gone, however, and Semih deduces that his sister, Manustery Minister Apururu, had sprung him from jail using the ring that Joker had forced her to relinquish. She therefore hurries to the Manustery and calls Ajido-Marujido to the Star Sibyl's side.

Breaking into the Vestal Chambers they see the bearer of darkness creeping toward the Star Sibyl. Ajido-Marujido hurls fire at the creature while Semih looses an arrow but neither attack affects it. The unstoppable apparition approaches the Star Sibyl, mumbles briefly, and vanishes. In its wake they realize that the entity somehow contains the power of Fenrir. Ajido-Marujido is permitted to investigate and Semih accepts the Star Sibyl's decision to pardon him.

The Star Sibyl decides that she'd like to visit the Full Moon Fountain and Semih escorts her there. Joker and his Cardians appear to interrupt their reminiscence, however, warping all the Sibyl Guards away and keeping the Star Sibyl for themselves. Unable to do anything else, Semih returns to Heaven's Tower and maintains control in the absence of her leader.

The Yagudo catch wind of Windurst's situation and threaten to break their peace with the Federation unless concessions are made. Concerned that the Tarutaru will be too grief-stricken to defend the city if the Star Sibyl is lost, Semih meets Perih Vashai to prepare the Federation's Mithra forces for an attack. She then returns to the Full Moon Fountain with Ajido-Marujido and witnesses the extraordinary convergence of the bearer of darkness, Joker, and all the Cardians present. Their spirits become a single light and the Star Sibyl manipulates it to restore the Full Moon Fountain and revitalize Sarutabaruta. Semih Lafihna subsequently addresses the Yagudo and finds them less interested in making demands. 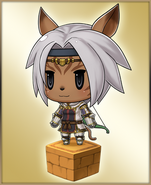