Selphie makes a cameo as a tutor from the in-game manuals. She breaks the fourth wall as she claims she is playing the game alongside the player. Selphie says she needs to play more to cheer herself up after failing her exam, but she gets stuck on the boss battles.

Selphie appears as a playable character.

Selphie appears as a playable character.

Selphie's sprite.
Add a photo to this gallery

A newly transferred SeeD cadet. Energetic, always smiling, and never shy, this lighthearted mood-maker has been known to casually drop a dark joke or two.

Selphie appears as a Legend.

The End (UR+).
Add a photo to this gallery

Rapture (UR+).
Add a photo to this gallery

Selphie is a playable character who could first be recruited as part of the A Planted SeeD Challenge Event. She was the First Time Completion Reward at the Missile Base. She was reissued globally on November 16, 2015 to prepare for Gunblade of the Sorceress; to unlock her on that day, players had to start an Event Quest and complete the Daily Dungeon on Hard difficulty. From November 18, 2015 until the Quest system was retired, she could be unlocked after accepting a Bonus Quest and completing the Record of Balamb Garden, Part 1 on the Classic difficulty track. She has since appeared in A Meeting Beyond Time, and had her starring role in A Special Place.

Selphie is represented in Earth-elemental cards. She is depicted in her official Final Fantasy VIII artwork and in her appearance in Final Fantasy Airborne Brigade, as well as an Amano artwork alongside Squall.

15-077S Selphie and Squall.
Add a photo to this gallery

Selphie appears on a Triple Triad card, but it has different values than the card in Final Fantasy VIII. 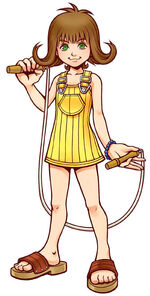 A younger Selphie appears in Kingdom Hearts as a resident of Destiny Islands. She is friends with Tidus and Wakka from the Final Fantasy X cast, and tries to keep the two in line. She uses a jump rope instead of nunchaku, and is available as a sparring partner for Sora early in the game. Once Sora, Riku and Kairi are swept off the island, Selphie is left behind. She is still as clumsy as she was in Final Fantasy VIII; during a sparring match with her, she will accidentally hit herself with her jump rope if Sora manages to block her swing in time.

In Kingdom Hearts II, Selphie is back on the islands with Kairi, attending classes with her in town. She wears a school uniform and mentions Tidus and Wakka are "all wrapped up in their ball game" to Kairi.

She is voiced by Molly Keck in the English version and by Mayuko Aoki in the Japanese version.

Selphie makes an appearance in Kingdom Hearts χ [chi] as one of the obtainable character cards. She appears in the remake, Kingdom Hearts Union χ[Cross], on several medals.

Appearance in Chain of Memories.

Appearance in Chain of Memories.