Final Fantasy Wiki
Register
Don't have an account?
Sign In
Advertisement
in: Races in the Crystal Chronicles series, Selkie
English

Various
Selkies are one of the four tribal groups from the Final Fantasy Crystal Chronicles series.

Selkies have some of the same characteristics as the Clavat Tribe. They usually wear little clothing with some animal fur. Their hair ranges are from bright colors to plain white. They are the quickest of all the races and while they have decent attack stats, they are most notable for their exclusive use of the double jump and go through shortcuts in dungeons. They are able to interbreed with Clavats and Lilties.

These rugged individualists clothe themselves in fur decorated with stolen goods. Unlike other tribes, they believe in putting themselves first. Many Selkies are agile and athletic, traits they put to good use as thieves. Though the other tribes tend to scorn them, some Selkie now reside in Clavatian villages.

Selkies are the quickest race with the quickest Focus attacks; they also have a longer range on their focus attacks than the other tribes. Overall, the Selkie excels at Speed and has decent Strength, but lacks slightly in Defense and Magic. The Selkie "Defend" command is a quick backflip that ignores all attacks and magic. Selkies use rackets as weapons, some of which shoot energy for a Focus attack.

Many of the specific Selkie characters seem to mainly look out for themselves; the Striped Brigands, for example, are thieves (although they are rather incompetent at actual theft), and the Selkie caravan that the player can come across seems to have no interest in actually getting the myrrh needed for the crystal in their town of Leuda. The Leuda crystal manages to replenish itself every year despite the laziness of the caravan. If a player is not a Selkie and talks to people in Leuda, they will have gil stolen from them.

One of the playable characters in Story Mode, Gnash, is a Selkie. Other notable Selkies include King Kolka, the King of Rebena Te Ra. Princess Tilika, the daughter of King Kolka, is half Selkie and half Clavat.

Their main weapon is a bow. They have the highest SP of all the Tribes, can hit enemies from long range, and have better chances of inflicting critical hits as they level up. When they begin, they are only able to fire one arrow, but as they level up, they will eventually be able to fire five projectiles in a single shot. They are the only Tribe with the ability to "double-jump", allowing them to navigate through maps with ease. Their tribe ability is "aim", using the touch screen, players can aim at any target and shoot energy charged arrows (especially useful on bosses where the player can choose to attack a specific spot on the body).

Another advantage is that they can talk to the village cats and dog. In story mode, Gnash will respond to the animals when the party talks to them. In multiplayer, one can actually understand what they're saying while playing as a Selkie. 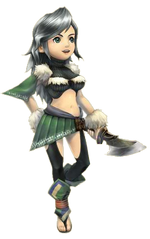 One of the main characters, Chancellor Chime, is half Selkie and half Clavat.

Selkies only appear in the Kingdom after an Inn is built. They do not stay and cannot be recruited until a Selkie Den, an additional downloadable content, is built. Female Selkies can only be recruited as Thieves. 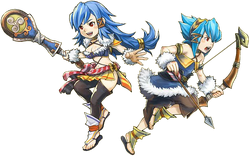 Selkies are one of the four playable tribes. They can jump higher than any other tribe and equip bows. They can also equip paddles. 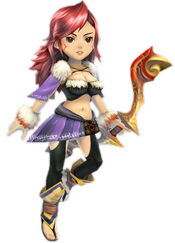 There are only three Selkies: The protagonist Mira who is half Clavat and half monster (the monster was originally a Selkie), Bel Dat, and Chancellor Chime. Mira confronts Bel Dat, believing her to be the leader of a famous gang of thieves, but she is mistaken. Chime appears as the first boss (she is half Selkie, half Clavat). Bel Dat is the only pure-blooded Selkie out of the three, though, as Mira and Chime are half Clavat as well as Selkie.

Most Selkies reject the authority of the Lilty Empire, and turn to thievery to survive. A notable exception is Layle's partner, Keiss, along with Belle. They are the only tribe to not be represented with a Crystal Bearer. 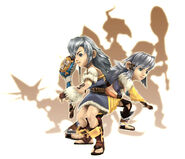 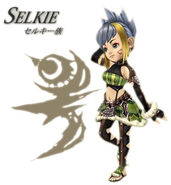 My Life as a Darklord

My Life as a Darklord.

[view · edit · purge]Selkies are mythological creatures found in Faroese, Icelandic, Irish, and Scottish folklore. Selkies are said to live as seals in the sea, but shed their skin to become human on land.