I call upon the light of the mothercrystal!
Smite the origin of Emptiness!

Selh'teus, referred to initially as Enigmatic Youth (謎の少年, nazo no shounen?), is a mysterious figure and main character in the Final Fantasy XI: Chains of Promathia storyline of Final Fantasy XI. His origin, intentions and history are a major plot point and are explored throughout the story.

Originally a Kuluu child and friend of Nag'molada, he believed that there was a way for Kuluu and Zilart to live in peace. However, the Zilart attempted to open the Gates of Paradise and reach Al'taieu, causing the Meltdown. Selh'teus became the protector of Al'taieu, trying to prevent the Gates from being reopened and the world being returned to its original state. This would cause the death of all living beings, since they are, by nature, imperfect, and would not be able to survive within a perfect, complete world.

Absorbing the spreading Emptiness within himself, he was eventually overcome by it and died. However, when Tenzen used the power of Phoenix to stop Bahamut from destroying Vana'diel, the spirit of the avatar revived Selh'teus, granting him a very different physical form (older in appearance, with wings, the red wing symbolizing his union with Phoenix), so that he might continue to perform his task as a protector.

When the player travels to Abyssea, an alternate version of Vana'Diel, they discover the world on the brink of being completely consumed by Emptiness. It is revealed later in the story that the condition of Abyssea is caused by the player's Abyssean counterpart failing to defeat Promathia, whom then absorbs the player and Selh'teus, turning him into the dreaded wyrm Shinryu.

During the Rhapsodies of Vana'Diel story, Selh'teus informs the player that he has been collecting light over the years in order to form a new Mothercrystal. A new Mothercrystal is created in Reisenjima, where Iroha mentioned one was in the future.

Furthermore, in Rhapsodies of Vana'Diel, the player must confront Sempurne in Desuetia. Desuetia, an alternate timeline, is a world where Promathia's ascended form (Shinryu, having absorbed Selh'teus) has wiped out all life on Vana'diel.

Selh'teus fights as an ally, together with Prishe in the Chains of Promathia mission "Dawn" against Promathia. He is required to remain alive for the battle to be won. Should he be defeated, it is considered an instant loss.

Selh'teus appears with a Fire-elemental card. 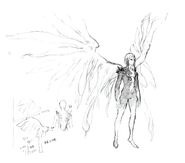 Sketch of Selh'teus's form after being revived by Phoenix.