A bow given the name of the goddess of the moon. Selene is, not only a beautiful goddess of the moon, but is also the goddess of life who oversees the reproduction of life. The arrow she uses lets out a soft, moonlight glow that cleanses all those unholy. Though it is unknown whether this bow was employed by the moon goddess herself, it has already proven itself as being an effective weapon against the undead.

Selene Bow is a mid-ranked bow from the 3D versions that provides 63 Attack and can only be equipped by the Onion Knight and Ranger classes. It can be bought for 16,000 gil at Amur or found at Saronia Castle.

Selene's Bow is an archery weapon that provides 72 damage, 540 delay, STR +2, and increases Ranged Accuracy and Ranged Attack depending on the phases of the moon. It deals 8 damage per second and accumulates 145 TP per hit. It can be equipped by level 60 Ranger. It is dropped from White Coney and Black Coney.

Selene Bow is a Bow that provides 72 ATK, +50% physical damage against Undeads, +70% accuracy, has a 125-175% damage range, requires both hands to wield, and grants access to the ability Barrage. It is obtained by completing the quest "Garbage Collection". 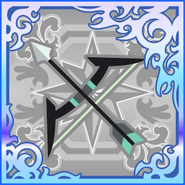 [view · edit · purge]Selene means "moon" in Greek. In Greek mythology, Selene is the goddess of the moon. She is the daughter of the Titans Hyperion and Theia, and sister of the sun-god Helios, and of Eos, goddess of the dawn. Her equivalent in ancient Roman religion and myth is Luna, Latin for "moon".