Double long
The Seitengrat is an invisible bow in the Zodiac versions of Final Fantasy XII. It is one of four secret equipment pieces added in these versions, including the ultimate one-handed melee weapon Great Trango, the lethal status-inflicting weapon Bonebreaker, and the high evasion all element-absorbing shield Gendarme. Like many of the added weapons, Seitengrat requires no license to equip.

The Seitengrat is by far the most powerful weapon in the game, and has double the range of all other long-range weapons, which makes it an easy choice for clearing out regular mobs.

A defensive alternative to the Seitengrat's 225 attack and 75 Evasion, is the Great Trango that has 153 attack but is one-handed and so can be equipped alongside the Gendarme shield with 90 evasion, 90 Magick evasion and which absorbs all elemental damage.

The Seitengrat can be obtained when the player can board the Skyferry. Entering the deck of the Skyferry offers a 1% chance for an invisible chest to spawn on the deck that has a 20% chance of containing an item, and if the player has the Diamond Armlet equipped, the chest has a 5% chance of containing the Seitengrat. With this 1 in 10,000 chance every time the deck is entered (assuming the player knows of the hidden chest), the Seitengrat was intended to only be gotten by fluke or serious persistence. However, with RNG manipulation one can guarantee the chest spawns and relinquishes a Seitengrat.

When the player acquires the Seitengrat, they can go to the Cerobi Steppe's Old Elanise Road area, equip it, and near the entrance from the Tchita Uplands, by a tree, an arrow will float in the air at about head-level. The arrow will be the same type as the player's currently equipped arrow. (This is shown in the infobox image.)

It is possible to guarantee that the Seitengrat will spawn on the Skyferry by exploiting the game's random number generator (RNG) in The Zodiac Age version, with various methods, such as this in this YouTube guide. The player should create a new save file in Nalbina Fortress at the beginning of the game as Reks, and then load their main save file. In their main save file, the player should set Vaan as the main party member and equip him with a Diamond Armlet, and then visit Rabanastre and take the Skyferry to Nalbina. From there, the player should enter the deck, and then close their application.

The player should load up their newly created save file at the beginning of the game in Nalbina Fortress as Reks, and cast Cure on themselves, until the amount cured is three specific numbers in the exact order: 88, 97, then 90. The player should quit to title screen, load the auto-save made in the Skyferry, and the invisible Seitengrat chest will have spawned. Go to the chest and watch the NPC on the stairs. He'll regularly climb up and down them. On his fourth time going up the stairs, open the chest as his feet hit the top step. This method also works on PlayStation 5.

Depending on the player's PlayStation 4 model, they may want to use another number set due to differing RNG positions. One such differing set is 97, 94, and 95. This time, after loading the Skyferry file, the player should run up to the chest and watch a child NPC to the left looking over the railing. The child will run to the right end of the railing and then to the left end. Finally, he'll return to his original position. The player should open the chest as soon as he enters said original position.

For the Nintendo Switch version, it is also possible to use the aforementioned RNG method to get not just the Seitengrat, but other ultimate equipment like Great Trango and Gendarme. The method involves precise calculations and prediction of the right moment to get a given treasure chest to both spawn and to bring the desired item.

Several gaming communities and YouTube channels, give comprehensive explanations about how to perform RNG manipulation to get Seitengrat. For the most of the successful reports of getting the Seitengrat, the following procedure appears to be fairly consistent: 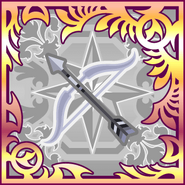 [view · edit · purge]Seitengrat is a mountain peak from Japan's Hida Mountains. When the team first started making the International version, the game's director, Hiroyuki Ito, was interested in mountains and wanted to use interesting names for the game.[1]