Cid Pollendina: Oh, shut up and help me remodel the Seismische page!
Please expand this article into a full one. The following tasks need to be completed:This request can be discussed on the associated discussion page. Remove this notice upon completion.

Earth
Seismische is a non-playable character that appears during the "Eureka" arc of Final Fantasy Dimensions II. She is the Prismatic God of Earth in the land of Eureka, serving as a minor antagonist during the events of the arc.

Lastly, she is also fought as a superboss on the 41st floor of Babil Tower. 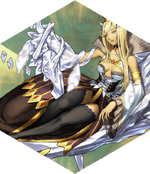 In the original free-to-play versions, Seismische only appeared as a raid boss. Like a majority of the other Prismatic Gods, Seismische was initially introduced to the game as a raid exclusive boss during the game's time as Final Fantasy Legends: Toki no Suishō. In this content, she served as the main boss of the "Perpetual Seismische" raid event and was a DPS race-type boss for players to complete before the turn counter was up.

Seismische would not receive a proper introduction in the game's story until the release of the "Eureka" arc in the relaunch of Final Fantasy Legends II. Her role in the story was the same as the premium version, however her boss encounters did not occur during the "Eureka" arc due to the storyline being solely dialogue based in the free-to-play versions.

Seismische is German for "seismic".