Quest: Back to the Reckoning (Version 1)
Quest: Data Backup (Version 2)

Matrix (Version 1)
Sachiyo Soeda (Version 2)
Seiryu is an Eidolon and a non-playable character in Final Fantasy Dimensions II. He chose to live in the human world in the land of Ajima to defend humanity. A younger Eidolon, he serves as the loyal bodyguard of Suzaku and as the Holy Beast of the east. Together with Suzaku, Byakko, and Genbu, they make up the "Four Holy Beast" Eidolons.

Similar to the other Holy Beasts, Seiryu can be obtained as a water-elemental signet for Maina to equip. There are two versions of Seiryu available in the game for Maina; a version that teaches Suiton abilities, and a version that teaches her Ice Blade abilities. The first version can be obtained by completing the "Back to the Reckoning" main quest of the Crystal of Time arc, while the second version can only be obtained as a first-time completion reward for the "Data Backup" side quest.

In his in-game sprite, Seiryu is depicted as a young man in blue colored traditional eastern garbs and has light black hair.

Seiryu is often depicted as calm and serious, not tolerating any impudence from any individuals.. He is loyal to Lady Suzaku and serves as her faithful bodyguard, always being at her side and following her orders when it comes to Suzaku's plan.

After the Mysidia Crisis and before the events of the present era, Seiryu and the other Four Holy Beasts decided to stay behind in the human realm to observe the progression of humanity and live among them. As time passed on, they would eventually be worshiped as the guardians of the four corners of Ajima.

Seiryu is first mentioned during the events of Chapter 3 after being instructed by King Odin and Ramuh to seek out the Eidolons living among the humans in an attempt to stop the Day of Reckoning from occurring. After speaking to Leviathan at the Great Lakeside, he instructs Morrow and his friends to seek out Seiryu and the other four Holy Beast Eidolons who reside in the Middle Ages.

Once arriving in Ajima, Seiryu begins to shadow the party in his human form during their quest to find the Holy Beasts. During this time, Suzaku begins to plan with Seiryu to lure the party to Ogre Mountain.

After speaking to Sache's father in the S'zaku Forest, Morrow and his friends return to S'zaku to learn that a girl, Nazz, from the village has gone missing after speaking to a suspicious-looking man. Wrieg realizes that this individual is also the unknown man stalking them through Ajima. The villagers then warn the party that they saw the man heading towards Ogre Mountain, which causes Parai to storm off.

At Ogre Mountain, the party encounters Seiryu, who poses as Nazz's kidnapper, and leads the party into believing that he is allied with the ogres. Parai attempts to attack Seiryu, but Seiryu startles Parai by pulling out his naginata. After being defeated by the party, Seiryu comments on how strong the party is, which causes the party to realize his identity. Nazz then tells Seiryu to step aside and reveals herself as Suzaku, the leader of the Four Holy Beasts. The party battles Suzaku and defeats her. After the battle, Suzaku reveals that Seiryu and her were on Ogre Mountain, growing concerned about the outside sinister power influencing the Gigantes, and that the Gigant that slew Parai's father years ago is leading the pack to attack Ajima.

After defeating the gigantes, the party returns to S'zaku to meet with Seiryu and the other Four Holy Beasts, revealing they were watching the fight from afar. Seiryu and the other Holy Beasts thank the party for their help in bringing peace to Ajima and bringing together the people of the land to battle the threat. They urge the party to make their way to Westa and reveal that the entity that is influencing the gigantes is a being that transcends time. The Four Holy Beasts depart and Seiryu states that he hopes the party lives long enough to meet with them again.

Returning to the present timeline, after the prototype robot machines kill Captain Biggs's soldiers in Westa and an Ajiman soldier named Ueji is branded as a traitor in Ajima by presidential candidate Marina, Seiryu and the other Holy Beasts realize that this is the work of the unknown outside force and devise a plan to have the former captain and soldier meet in Navos with the help of Morrow and his companions . At the same time, Suzaku devises a plan for her and Seiryu to infiltrate Marina's forces to find out her motives.

Once Biggs and Ueji meet each other in Navos, they decide to head to the Fort Agart in an attempt to clear Ueji's name. In the fort, Biggs and Ueji are surrounded by a group of Mindflayers led by Marina and a mysterious man garbed in a blue robe. Before the monsters can attack the two men, the man in the blue robe reveals himself to be Seiryu in disguise and fends off the monsters. Marina is shocked to learn that the Four Holy Beasts of Ajima have interfered in her plans. At this time, Morrow and his friends arrive to the depths of the Fort Agart, Marina reveals that she was tricking Maina all along with her talks of peace and used her to steal information on Westa's military weaponry for creating the Flare Weapon for Ajima to use. After revealing her true motives, Suzaku demands that Marina abandon her human form and reveal her true form to them. Marina does so and reveals to Seiryu and the others that she is Marilith of the Four Chaoses, creatures that were sent through time to wreak chaos throughout history.

After Morrow and his friends defeat Marilith, Seiryu and Suzaku thank everyone for their help and vow to help in the pursuit to bring Ajima and Westa into a new era of peace.

After the Chaos infects all the timelines and brings time to a halt, Seiryu and the other Holy Beasts are under the control of Chaos's influence. When Morrow and his companions travel to the Middle Ages to gather the shards of the Fire Crystal to bring the flow of time back to the Present, they travel to Ogre Mountain in search of Nerrick's portion of the fire crystal. On Ogre Mountain, they encounter Seiryu under Chaos's influence and are forced to fight him. After defeating Seiryu, Morrow and Jornee use their crystal shards to release him of the Chaos's control. Seiryu apologizes for being too weak and falling under its influence and asks them to free Suzaku from Chaos's control.

Once the party tracks a Chaos-controlled Suzaku to the S'zaku Forest, Seiryu, Byakko, and Genbu arrive in an attempt to fight Suzaku themselves. However, they cannot bring themselves to do so, which leaves the party to battle her to spare them of the pain of fighting her. After freeing Suzaku from the Chaos's control, the Four Holy Beasts give the party Nerrick's crystal shard and reveal to them the next shard's location.

And Then Time Flowed[]

During the final chapter of the Crystal of Time arc, Morrow and his friends fight Chaos Bahamut in the Chaos Torrent. After defeating the creature, it revives itself and the Four Chaoses once more through all of history. To defeat all four Chaoses throughout history to weaken Chaos Bahamut, the spirit of Minwu summons all of the party's allies to aid them in combating the Chaoses. Seiryu, along with Shiva, Gad, Dr. Black, Biggs, and Ueji, are summoned to fight Marilith in the present timeline’s Chaos Torrent. The party arrives to aid Seiryu and the others and defeat Marilith once again.

Despite the appearance that Chaos Bahamut and the Chaoses were finally defeated, it revives itself and the Four Chaoses, leaving Seiryu and the others to attempt to combat them once more, while Morrow and his friends are forced to retreat.

Both versions of Seiryu share the Skybind summon attack, which deals water-elemental damage to all enemies and lowers their speed for a single turn. Summoning Seiryu requires 1 gauge from the Summon Gauge.

The following are the abilities Maina can learn from the first version of Seiryu:

The following are the abilities Maina can learn from the second version of Seiryu:

In the original free-to-play versions of the game there were two variations of the first version of Seiryu, a weaker variant that taught Suiton abilities and a stronger variant that taught Blizzard Breath abilities. The former could only be obtained as a possible treasure reward for completing the Ogre Mountain or Big Bridge battlefields. The second version could only be obtained through purchase at the Babil Tower exchange shop.

The second version of Seiryu was originally a unique version of the summon known as Seiryu α (セイリュウ α, Seiryū α?), which also taught Ice Blade abilities. Seiryu α could only be obtained through the game's summon draw shop. 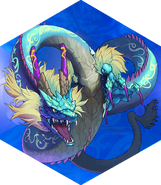 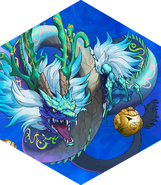 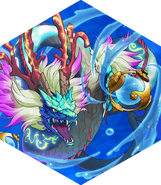 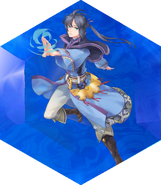 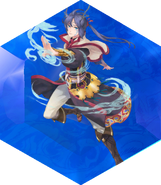 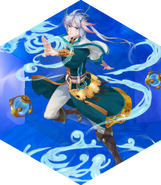 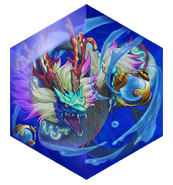 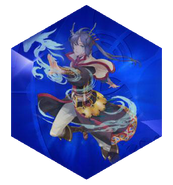 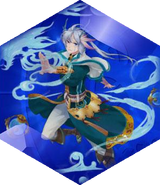 [view · edit · purge]The Azure Dragon is one of the Four Symbols of the Chinese constellations. According to Wu Xing, the Taoist five-elemental system, it represents the wood-element, represents the east, and the spring season. Thus it is sometimes called the Azure Dragon of the East. It is known as Qing Long in Chinese, Seiryū in Japanese, Cheongnyong in Korean, and Thanh Long in Vietnamese.