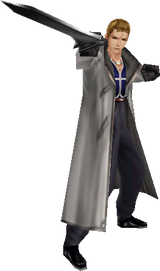 Seifer is a temporary party member and a boss in Final Fantasy VIII. He is playable for the first portion of the Siege of Dollet during the SeeD exam. All the magic the player draws into his junction is passed onto Selphie after he leaves.

Seifer has an affinity to Fire, as every time he uses his Limit Break he starts off by casting a fire spell at his target in similar fashion as seen in the game's opening FMV, although it is merely part of the animation and non-elemental, and thus not the same as casting Fire with the Magic command. Fire spells are also drawn from Seifer during the encounters with him as a boss.

As with other playable characters in the game, a Triple Triad card based on Seifer can be obtained.

Seifer wields a gunblade. His particular model is Hyperion, featuring a pistol handle based on the Beretta M9, rather than the revolver handles favored by Squall. The Hyperion might be lighter than Squall's Revolver, as Seifer holds it with one hand. Pressing the

trigger button when he strikes will boost his damage. Hyperion provides 12 Strength.

Seifer's Limit Break is Fire Cross. No Mercy is the only one that can be used by the player. Unlike the other player characters, Seifer can use his Limit Break without having to be in HP Critical; the chance it becomes available is at 84% or lower from his max HP. This appears to be changed in the Steam version; it is available at 100% of max HP.

The below values are the base compatibility values at the start of the game. Seifer only gets the opportunity to use the first three GFs, and so most of his compatibility values do not matter. Therefore they have the arbitrary pattern of decreasing by 20 instead of logically determined values.

Seifer is fought as a boss four times in the story. He uses Fire-based attacks and gains new Limit Breaks every time he is encountered. If the party has Odin, a cutscene will occur the last time Seifer is faced. Seifer is the only enemy to have the rare spell Aura available for drawing.

Seifer's Demon Slice and Bloodfest Fire Cross abilities are used during battles against the player. Fire spells can be drawn from Seifer.

Seifer is a Level 10 Player Card in Triple Triad used for playing the minigame and for turning into 3 Diamond Armors with Quezacotl's Card Mod. The card can be won off Headmaster Cid in Balamb Garden or Edea's House.