Final Fantasy Wiki
Register
Don't have an account?
Sign In
Advertisement
in: Characters in World of Final Fantasy, Antagonists

Edit
watch 18:06
World of Final Fantasy: Plumed Knight and Knight in the Golden Mask Boss Fight
Do you like this video?
Play Sound

Cid Pollendina: Oh, shut up and help me remodel the Segwarides page!
Please expand this article into a full one. The following tasks need to be completed:This request can be discussed on the associated discussion page. Remove this notice upon completion.

Order of the Circle

Richard Tatum
Segwarides, known to the party as the Man in the Golden Mask (黄金の騎士, Ōgon no Kishi?), is a major antagonist in World of Final Fantasy. He is a member of the Order of the Circle and one of the leaders of the Bahamutian Federation, which is set on conquering Grymoire. He, alongside his partner Pellinore, serve the Herald Brandelis.

Segwarides is a tall creature with thin legs and wide shoulders, wearing a dark purple cloak that covers his torso and legs. He has golden hands, a large golden mask and a single golden foot. The mask has a carved face with a turquoise gemstone set in the forehead. Segwarides folds his arms in front of him, even when using magic.

When fought in the post-script chapter, Segwarides's appearance is similar to the Zona Seeker esper from Final Fantasy VI. His cloak opens to reveal a second red cloak. His body is composed of a knot of dark gray bandages wrapped in golden chains and impaled with several teal colored crystal crosses. A golden spine or tail trails of the base of his neck, and Segwarides' arms are unfolded and outstretched, revealing golden arms. His in-game profile states that he was, in fact, a Zona Seeker class esper before becoming an Exnine Knight.

Brains, Not Brawn
Like Pellinore, Segwarides copied himself into the body of a human in order to join Brandelis in Grymoire. And just like with Pellinore, he was unable to take the full extent of his power along for the ride. However, Segwarides was able to bring his most formidable weapon—his devious mind—and has been able to draw from it without restraint, even in Grymoire.

On Stealing a Body
Despite leaving their powers behind, Segwarides and Pellinore also gained powers upon entering Grymoire: namely, the powers of their human hosts. The so-called Bahamutian Federation's hold on the bulk of Grymoire Mirages can largely be attributed to Lusse and Rorrik's abilities. However, because of Pellinore's continued failure to fully subjugate Lusse, her command of Lusse's powers remains inconsistent. Lann and Reynn have been far more successful at stealing Mirages back from the Bahamutian Army.

Destiny Control
Segwarides' numeric designation in the Exnine Knights is Ex9-I-3. One of his talents is "destiny control," the ability to direct the course of history through prophecies. By scripting the future he seeks and letting others believe they are destined to make it happen, he can guide the world toward a preestablished harmony. However, he cannot simply tell people what to do; the prophecy must contain convincing steps and criteria. Thus, achieving results can be a long and agonizing process.

Segwarides is an Exnine Knight and a member of the Order of the Circle. He was created from the merging of a Zona Seeker class esper, a human named Pwyll and an entity from the Extraverse.

One-hundred years before the events of game's present events, Lann and Reynn opened the Ultima Gate, allowing for the Herald Brandelis to emerge from the portal. After striking down both Lady Lusse and Rorrik, Brandelis grabbed the two and offered up their bodies for two of his of servants to possess. At this moment, Segwarides entered Rorrik's body, changing his body to copy his physical appearance and had full access to all of Rorrik's powers.

After Lann and Reynn were sent to an alternate version of Nine Wood Hills, Segwarides would devise a false prophecy known as the Crimson Prophecy and spread it throughout Grymoire, so when the time came for the twins return, they would follow it and open the Ultima Gate once more.

Sometime before the events of the present, in order to move his plans forward with kidnapping the summoners of the world, Segwarides would travel to a far off continent and kidnap Terra Branford. Due to her being a Medium, Segwarides would experiment on her and would eventually place a Slave Crown on her to control her powers. However, due to her Esper Maduin, he soon realized Terra was a difficult pawn to control and she would eventually lose control completely.

During the game’s story, Segwarides appears before Lann and Reynn inside Saronia Castle after the two defeat the Bahamutian Federation Guard posing as Refia's Uncle Takka. Seqwarides strikes down the Federation Guard attempting to attack the party, berating him for attempting to fighting the awakened Champion Refia and attempts to strike down the group. However, before he tries to do so, Sherlotta breaks in through the castle windows and attacks Segwarides with fire magic, allowing the group to escape in time.

Sometime later, after Lann and Reynn defeat Terra, who was unable to control her powers, at the entrance to the Crystal Tower, Segwarides arrives with glee and takes the unconscious Terra with him, using her for the Ultima Gate ritual.

After the Lann and Reynn arrive at the top of the Crystal Tower and are tricked by the Masked Woman to open the disguised Ultima Gate, Segwarides cackles in victory that the prophecy is finally complete. Brandelis reveals to the twins that Crimson Prophecy was nothing more than a plan created by Segwarides. After the illusion is dispelled by Segwarides, Tama realizes that Segwarides, Brandelis, and Pellinore are members of the Order of the Circle, to which the three speculate that they once fought Tama in the past. After the revelation, the Ultima Gate begins to open, allowing the Cogna to emerge from the gate. However, due to a last minute intervention from Tidus and the other Champions, the Ultima Gate is closed before the strongest Cogna can emerge from the gate. Segwarides ridicules the Champions for their meddling. However, Brandelis remarks that his plans of summoning the Cogna have already been completed and teleports him, Segwarides, and Pellinore back to their stronghold, Castle Exnine.

On the final floors of Castle Exnine, Segwarides and Pellinore are locked in a fight against Hauyn and her Mirage, Siren. After Hauyn and Siren get the advantage against Pellinore, Segwarides fatally strikes Siren and knocks Hauyn down. Segwarides proceeds to criticize Pellinore for her lack of control over her host body for the last century. Once Lann and Reynn arrive, Pellinore begins to speculate if the two are the world's true Champions and ponders if they should strike the two down once and for all. Segwarides shrugs off the idea due to the Crimson Prophecy being completed, but agrees the twins must be exterminated and he and Pellinore attack the two. Once the two are defeated and Lann and Reynn regain their memories, it is revealed to the twins that Segwarides and Pellinore were possessing bodies of their parents and they have inadvertently killed their parents in the process.

During the events of the Post Script chapter, Segwarides is revived and never dies at the top of Castle Exnine.

After Lann and Reynn obtain the Dyad's Servants, the two and their entourage return to the Ultima Gate to reverse-summon all the Cogna back into the gate, while the Champions attempt to distract Brandelis. Brandelis, realizing something is amiss, demands Segwarides and Pellinore goto the Ultima Gate to stop the twins' plans. Segwarides arrives before the group and recognizes their attempt at reverse summoning, attempting to strike down all the summoners. Lann intervenes calling out to his father to stop, knocking the two down the altar stairway. Segwarides then unleashes his full power and battles Lann alone. After being defeated by Lann, Segwarides releases his hold over Rorrik's body, however Rorrick is unable to survive.

Segwarides is fought two times throughout the story, once during the events of Chapter 21 inside Castle Exnine and another during Postscript serving as one of the penultimate fights to the final boss. 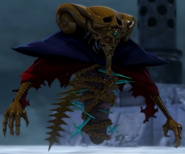