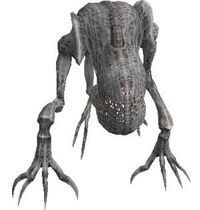 Seethers are a type of Empty, born of the memories of souls trapped within Promyvion. They can associate themselves with any element, as indicated by the glow of their cores, and their weaknesses and resistances depend on that element. Seethers can be found all areas of Promyvion, and can drop Memories and certain Recollections when defeated.

In Abyssea - La Theine, where the Crag of Holla has disappeared, one particularly spiteful seether known as the Meditator escaped the Emptiness, and now roams the plateau unseen except to those who possess Clear Demilune Abyssites.