The Seer is a job in Final Fantasy Dimensions obtained during the finale of the Tome of Twilight chapter. Seers are the enhanced version of the White Mage job, having access to level 8 White Magic by default and allowing characters to use the final tier outside of the assigned job.

The job exclusively learns the Dispel and Araise spells upon leveling up. They also learn the Resist Elemental ability set, allowing them to use Bar-Spells, making them useful against enemies that use elemental attacks. Despite the job being an updated form of the White Mage, the Seer lacks the utility passives its predecessor has access to, such as MND +20% and Mental Discipline, making the former job needed to take full advantage of the Seer.

The Seer is an excellent job to support the party in battle, especially with fusion abilities such as Full-Cure, Hastega, and Esunaga.

In the original Japanese-exclusive cellphone version, all party members dress in either red or white robes with cat-ear hoods. The sprites are heavily inspired by the Devout sprites from the original Famicom version of Final Fantasy III.

In the remastered versions for iOS and Android, only Sarah wears a cat-eared hood, while Dusk wears what is presumably a cat-eared headband, and Sol and Aigis forgo the ears outright for priestly hats.

Seer is the job with the highest mind.

The guest character Sophia, unlike most of the other guests, does not have the same stats as the Seer job, instead she has her own table of stats. 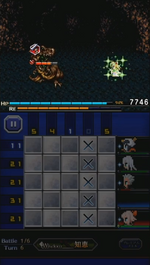 Sol as a Seer.

Sarah as a Seer.

Dusk as a Seer.

Aigis as a Seer.

[view · edit · purge]A seer may refer to a clairvoyant, prophet, oracle, or diviner.