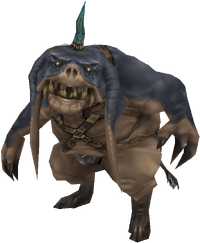 The seeq is a creature found in Final Fantasy XII, appearing in various areas as regular enemies. They have a bestiary entry and can be classified as Thieves, Caterans, or Explorers, as well as regular seeq.

Humanoids of great girth, considered somewhat duller and cruder than humes. Though they appear ponderous, they move with surprising alacrity, making excellent warriors whether on the attack or defensive. However, their barbarous natures and lack of courage find them engaged more often as bandits or worse. Very fond of gemstones, gold, and other shiny objects, with which they richly adorn their bulky forms.

Page 2: The Riddle of MythEdit

Most Myth and Legend, through the Influence and Designs of Culture and Religion, becomes warped considerably from original Form. However, should we look more closely into its myriad Folds, therein might we find the Thread of Truth. Come, friend, and I shall guide you through one such Myth, a Story of Ivalice and Her Creation. Though stories of the Great Making are as many as the Stars in the Firmament, few are they that begin with a Tale of Vengeance.
Look closely: mayhap it shall be you who finds the Thread within.

And so it was that Fabar and the Danan, being tribes of Gods both, warred for many thousands of Years, until the Prophet Matoya foresaw that Xabaam, God-king of the Danan would die by a trusted Blade, and War would end.
Fearing death, God-king Xabaam took his most trusted General, Ahnas, God of Swords, and thrust him with his Retinue into the ever-darkened Depths of a great Labyrinth, there to bide for all eternity.
Yet Ahnas begged aid of Heth, God of Death, who was Lord of the Labyrinth, and so did He make his escape from that Gaol.

So did Ahnas offer His own Life to Heth, God of Death, in exchange for his Release, and together with his Followers did he swear Vengeance.
Several Millennia had passed, when an Army appeared before the Fabar. It was the Followers of Ahnas and Ahnas himself, his Life made One with that of Heth. He was now Ahnas the Holy, and together with his Army he won Battle after Battle against the forces of Danan, until word of his Triumphs reached the Ear of We'aka, Fabar God of Makings, and upon one Day, Ahnas revealed to We'aka his true Story.

We'aka saw Strength in the Vengeance, and thereupon swore an Oath that Ahnas' Army should join in the final Battle against the Danan. So did the Long War between Fabar and Danan enter its final chapter.
Then did Ahnas call upon the Magicks of Heth to give his Army strength for the Battle to come. Some were given new Forms: those of Elemental Lords of Fire and Water. Others were given the Powers of Venom or crushing Force, and glorious were all the Victories of those so transformed.
War raged on for a thousand Days and Nights. When, at last, Ahnas was triumphant over the Danan, then did he reveal himself to God-king Xabaam and so took him Captive.

We'aka, God of Makings, and the Fabar ordered that god-king Xabaam's Head be taken, yet Ahnas wished that Xabaam pay for his treachery, and so did he cast a Magick of eternal life upon the once Lord who was now his Enemy, and so fashioned his Body into a great Land. Then did Ahnas and his Retinue ascend to Heaven, whence to look down upon the Land they had created.
Now Ahnas the Shining named the cursed land "Ivalice," and made Men to walk upon Her. In Time, Man began to eat away at her Soil, digging deep within her Folds, threatening to destroy the very body of Xabaam the Eternal, even while the Memory of his Sin remained.
So did Ahnas and his Retinue divide themselves into two: Perselas of the Day, and Metselas of the Night, and swore to guard this Land for Eternity.

Retrieved from "https://finalfantasy.fandom.com/wiki/Seeq_(Final_Fantasy_XII)?oldid=3219629"
Community content is available under CC-BY-SA unless otherwise noted.