SeeD
The SeeD Assault Boat is a hydrofoil seen in Final Fantasy VIII. Used primarily as a troop carrier for conflicts near accessible waterways, the assault boat can seat a compliment of six soldiers plus two pilots with standing room for at least one more. Entrance is via a starboard hatch, an opening on the bow, and a top hatch that provides access to an artillery gun, the only obvious offensive weaponry.

Seen in use during the Siege of Dollet, Balamb Garden sends a fleet of these hydrofoils to secure the beach and unload reinforcements for the Dollet army in the form of SeeD mercenaries and cadets.

Following the removal of Galbadian forces from the city, SeeD cadets are ordered to withdraw back to the hydrofoils for evacuation, whereupon the fleet return to Balamb for debriefing. 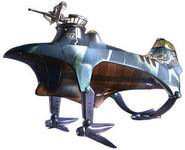 Interior of the boat.

Artwork of the gun turret.

Artwork of the back of the boat.
Final Fantasy VIII
Transportation
Community content is available under CC-BY-SA unless otherwise noted.