Many during Fateful Encounters

The metropolitan zone built atop the Sector 8 plate. Midgar's newest and and most picturesque sector is already a cultural hub, setting trends for the whole city. The district's playhouse is also home to the popular theater production Loveless.

The sector is known for Loveless Street, its main area of business and art, located in the business district. There, the Genesis fan club meets and performances of the epic Loveless musical take place. Sector 8 gives a glimpse of life in Midgar that those who escape the poverty of the slums can enjoy. As a traditional training mission, all rookie Turks are sent to patrol Sector 8.

In the first Episode, the player's Turk is sent on the traditional patrol Turk mission through Sector 8. The forces of the first AVALANCHE, an eco-terrorist group, attack Sector 8 to bring Shinra Electric Power Company down. Their plan is to the destroy the Sector 8 Reactor and take the entire sector with it. Tseng, who is monitoring the mission, orders the Turk to find out more about this AVALANCHE.

The Turk fights his or her way through the enemy ranks and into the mako reactor to stop them. Once the fighting gets intense, Reno, a fellow Turk, helps out as support. Inside the reactor, Reno and the Turk split up. While the Turk diffuses the bomb, Reno charges in to fight the enemy leader, a man named Shears who knows about the Turks and their skills. Shears is powerful, and beats Reno. The Turk goes in to fight Shears next, but is also beaten. Despite the defeat, AVALANCHE moves to Junon to attack President Shinra.

Sector 8 is the sector just outside of Shinra Building. It leads to the Sector 1 Station, where travelers can go down into the slums of Sector 5. It has two notable areas, the LOVELESS Avenue and the Fountain Place. Zack Fair can join the Genesis fan club here on his first visit.

The Genesis Army attacks Midgar later on and Zack must fight them through Sector 8. He runs into Reno and Cissnei of the Turks. Though Reno acts rude and territorial, Cissnei is grateful to Zack for saving her life.

Later on, Zack goes through Sector 8 on a hunt for parts for a flower wagon for his girlfriend, Aerith Gainsborough. He gets wheels from a man's car on LOVELESS Avenue in exchange for a piece of the profits from the flower venture. When Zack is sent to his mission in Nibelheim, he never can return to Midgar or Sector 8.

Four years later, Aerith sells flowers in Sector 8. Cloud Strife runs through Sector 8 while fleeing from Shinra forces after blowing up the Sector 1 Reactor. He meets Aeris, who offers him flowers. Shinra guards chase after him, and Cloud cuts the meeting short. As the Shinra forces surround him, Cloud jumps off the side of a bridge onto an oncoming train. He joins the rest of AVALANCHE on their way to their secret base in the Sector 7 Slums.

After the defeat of Diamond Weapon, Cloud and company parachute into Midgar, landing in Sector 8. Upon arriving at the same street Cloud escaped from the Shinra guards earlier, Cloud is forced into battle with the Proud Clod which is being controlled by the Shinra executives Scarlet and Heidegger. Once the battle is over, the machine is destroyed and the two executives seem to have died. The party travels up the Sister Ray support beam that was recently placed in the middle of the train tracks.

Sector 8 is destroyed along with most of Midgar when Meteor falls onto the city. No remnant of it survives the calamity.

In the beginning flash-back sequence, Vincent Valentine is in Midgar during Meteorfall. He ascends a flight of stairs to face Professor Hojo on the Sister Ray. It can be assumed this is the same path Cloud used in Sector 8.

Sector 8 uses notably European-style architecture, in the form of brick buildings, stone pavements, streets lit by flickering street lamps, and some landmarks representing European monuments. Along the sides of its streets are houses, cafes, and other stores. The streets feature red phone boxes, parked bikes, as well as speed limit signs showing a 25 mile per hour limit. Between the streets are narrow alleyways, some of which have visible graffiti markings on the walls, and above the streets in many areas are higher roads suspended on bridges.

Surrounding Sector 8's lived areas are the plate partition to its east, connecting it to Mako Reactor 1 and Sector 1, and a tunnel underground below that is used to reach the sector from Sector 0.

The plate partition is an area connected to Mako Reactor 1 and Sector 1. The area is a stone tunnel lit by a few lights, with dangling live wires from the ceiling, and large water pipes. After Avalanche destroy the reactor, the partition is heavily damaged, and covered in rubble.

Just after the plate partition is a small warehouse zone outside, which after the reactor is destroyed, is filled with debris, destroyed construction material, and is partly in flames. From here, a staircase leads up to the rest of the business district.

The main attraction of Sector 8, the Sector 8 Business District is a center of art and culture where performances of the Loveless musical take place. The district is marked by large theater buildings, with billboards and posters along their side, as well as large monitors with Shinra insignia. It is here where Cloud meets Aerith while she is selling flowers in its Loveless Street.

In the northern end of the district, the Sector 8 Station is located. Leading towards it is Station Avenue, a populated avenue with larger residential and theater buildings found along the side. The avenue is located just west of the Mako Reactor 1, which can be seen from the railings, and an alleyway halfway along to the station leads west to the more central Loveless Street. The station itself is a grand, stone building located west of a building with red trucks that appear to be for emergency services.

Located just north of the Fountain Plaza, Loveless Street is an avenue with a large theatre in which performances of the epic LOVELESS play take place. It is also the avenue where Aerith and Cloud met. The avenue is also home to other attractions: as seen in Final Fantasy VII Remake, this includes a pharmacy store named One Shot, a Loveless Grand Hotel, and a fashion store named MiNes, a meat market, a cafe selling pizza, and has signposts leading to the Sector 8 Station and the City Hall.

Near the center of the district is the Fountain Plaza, marked by the tall fountain located in the middle. Either side of the fountain are tall, stone bridges with clocks in their center. Surrounding the plaza are several tall buildings with neon signs and wide rooftops to traverse. The plaza is a major attraction of the district: as seen in Final Fantasy VII Remake, a bakery cafe named 8th Street is located there, along with menus for many cafes, and a bus stop on the side of a fountain.

On Cloud's first visit, the district is filled with rubble and debris from the explosion, with windows broken, residents frantically fleeing the sign, and entire streets are blocked off by flipped cars. On returning later, the site is dominated by the Sister Ray.

Underneath Sector 8 is a series of winding underground tunnels through which the sector is reached.

Cloud first visits the sector in "No. 1 Reactor Bombing," which takes place after the No. 1 Reactor is destroyed. The gameplay section is brief, as Cloud runs through the sector, meets the "Flower Girl", and then battles guards before boarding the train.

The second quest occurs when returning to Midgar for "Mako Cannon Rampage". Here, Cloud returns with the party to fight Professor Hojo, and access Sector 8 from the underground. The party fights Proud Clod, and then progress through the Sister Ray located in the fountain.

The entire field comprises only a few screens: the rubble underground (the plate partition), a screen outside Sector 8 (known as the "warehouse zone"), LOVELESS Avenure, the Fountain area, and the residential area where Cloud catches the train.

Sector 8 is seen in Chapter 2, "Fateful Encounters," which comprises events similar to the Sector 8 portion of "No. 1 Reactor Bombing" from the original game. Much like the original game, Cloud passes through the sector on his way to rejoin Avalanche at the train station, running into Aerith along the way. A new segment is added in which a vision of Sephiroth appears before Cloud and taunts him in the alleyways, and the section in which Cloud must fight through and escape Shinra soldiers is greatly expanded compared to the original.

This section about a quest in Crisis Core -Final Fantasy VII- is empty or needs to be expanded. You can help the Final Fantasy Wiki by expanding it.

In Crisis Core -Final Fantasy VII- shops can only be visited from the menu. Sector 8 Materia Shop is available after completing Mission 6-2-1.

In Final Fantasy VII, the background music that plays in Sector 8 after the Sector 1 Reactor explosion is "Anxiety" (不安な心, Fuan na Kokoro?, lit. Anxious Heart). Later, the background music that plays during AVALANCHE's infiltration on Midgar after the defeat of Diamond WEAPON changes to "Opening - Bombing Mission" (オープニング~爆破ミッション, Ōpuningu ~ Bakuha Misshon?), which also plays in the underground area.

In Final Fantasy VII Remake, the depiction of the devastation in Sector 8 after the Mako Reactor 1 bombing is greater, as can be seen from interactions with non-player characters and a greater depiction the destruction. This was done as the developers considered it important in conveying the internal strife that the characters experienced towards their actions, and the dialogue with the non-player characters was intended to create the atmosphere for later story developments.[1] 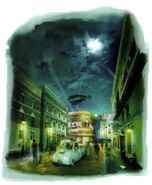 Sector 8 in the opening of Final Fantasy VII.

Outside area without fire. 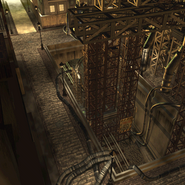 Sector 8 during the Midgar Raid. 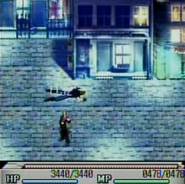 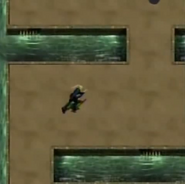 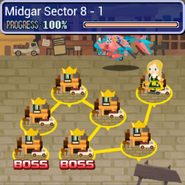 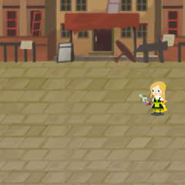