Sector 7 Slums is a field map in Final Fantasy VII taking place within the slums beneath the Sector 7 plate. It is the first town visited by the party, and is where Tifa first joins. Aside from 7th Heaven, the most notable area is the Support Pillar, where battles are fought during "Prevent the Fall of the Plate".

The Sector 7 Slums are first visited by a train leading to the Sector 7 Slums Station. East of the station is the Train Graveyard, and west is the crossroads connecting to the Sector 6 Slums south, the Support Pillar north, and the slums plaza west. In the slums plaza, four buildings are located: 7th Heaven is located, along with a Weapon Shop that also houses a Beginner's Hall and a bedroom that can be rented, an Item Store, and Johnny's home.

The Sector 7 Slums Station is used for trains leaving from and arriving in Sector 7. To the right is the northern end of the Train Graveyard, an abandoned part of the slums with damaged trains. To the left is the path to the crossroads.

The Support Pillar is located behind a fence in the crossroads, and holds up the Sector 7 plate above the slums. It is initially inaccessible, until the fence is opened when Avalanche fight Shinra atop the pillar in "Prevent the Fall of the Plate". Adjacent to the stone pillar is a tubular metal tower with a large staircase leading up to a console area at the top.

Top of the Support Pillar.

Top of the Support Pillar.

The slums area of Sector 7 features four buildings: Johnny's home, 7th Heaven, the Item Store, and the Weapon Shop. The area is a wide plaza surrounded by metal structures and rocks, with signposts pointing to the buildings, and the remains of a giant TV monitor.

The Weapon Shop is the tallest building in Sector 7, located at the southern end of the slums area. and contains a weapon shop on its first floor, a Beginner's Hall, on its second, and a bedroom on the top floor inside a small cubicle. which the player can use as an inn.

The ground floor of the Weapon Shop is the shop itself, where a merchant resides at a counter. At the back is a ladder leading up to second floor on the outside, where the Beginner's Hall can be reached. This room comprises a large cage, with several boxes within. On the outside of the second floor is a ladder leading up to the third floor, which itself has a set of stairs up into the bedroom. This is a small metal room with three beds, each decorated with a few posters, implying they are lived in by the owners who simply rent the room to visitors. 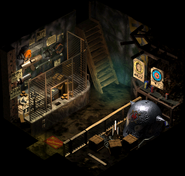 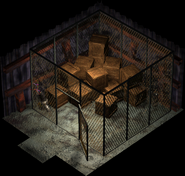 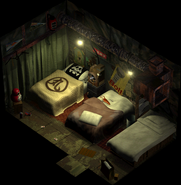 The Item Store is a small building situated on the southwestern end of the slums, and is made of navy blue metal plates. Adjacent to the building's front door are large signposts written by Avalanche, reading "Don't be taken in by the Shinra. Mako energy will not last forever. Mako is the life of the Planet and that life is finite. The end is coming. Saviors of the Planet: AVALANCHE". Inside, the building comprises a single room with a counter, a few items on display, and what appears to be a furnace.

Johnny's home is located at the northern-most part of the slums. It is a small semi-detached house with a single story made of metal plating, with a wooden interior. Inside, the house contains a living room with a TV and table comprising most of the space, with a bathroom and bedroom both sectioned off.

7th Heaven is a tall wooden building in the style of a Texan bar. The bar and restaurant is located in the upper floor, and AVALANCHE's hideout is located underground, reached through a secret elevator disguised as a pinball machine. A neon sign reading "Tyfer" is situated above the front door, and a larger "Texas" sign is seen at the top of the building. The bar has tables, bar stools, a counter where drinks are served, and a TV screen.

All quests take place in the chapters "At the Hideout in the Slums", "To the No. 5 Reactor", and "Prevent the Fall of the Plate". The first chapter is entirely dialogue-based, and comprises the time when Cloud meets up with Tifa at 7th Heaven up to the next day. This leads directly into the next chapter, "To the No. 5 Reactor". In this, Cloud, Barret, and Tifa prepare in Sector 7 before leaving to the train to Sector 5, on their way to destroy the Reactor.

In "Prevent the Fall of the Plate", Cloud and Tifa return to battle Shinra at the Support Pillar. This is the only time when encounters are fought in this location.

All encounters are fought only by the party during the "Prevent the Fall of the Plate" chapter.

The Item Shop only opens after Cloud rests, and the General Store can only be accessed just before the events on the pillar. The Iron Bangle armor can only be bought here, and the player will never be able to get additional copies once Sector 7 becomes inaccessible.

One rare interaction occurs in the slums when the player first enters. Here, Tifa briefly pops out of the 7th Heaven before going back in. If the player is fast enough to talk to Barret while Tifa is still outside, Barret will ask if Cloud is ready to see his "babe". Cloud's possible responses are: What do you mean? and OUTTA MY WAY!

On first coming to Sector 7, the first background music to play is "Under the Rotting Pizza" (腐ったピザの下で, Kusatta Piza no Shita De?), also known as "Underneath the Rotting Pizza". After Cloud accepts the mission to destroy Mako Reactor 5, the background music changes to "Barret's Theme" (バレットのテーマ, Baretto no Tēma?). Finally, during the final visit to Sector 7, the normal battle theme, "Those Who Fight" (闘う者達, Tatakau Monotachi?, lit. Those Who Fight), plays.