They say you can't grow grass and flowers in Midgar. But for some reason, the flowers have no trouble blooming here. I love it here.

The Sector 5 slums church is a presumably deserted church in the Final Fantasy VII series, located in the slums below Sector 5. Aerith Gainsborough has succeeded in growing flowers here, a remarkable feat considering the local mako reactors leave the soil barren. Flowers also grow near Aerith's house, so the church is not the only place in the slums where soil is fertile. It is unknown which religion the church is part of, though the architecture appears to be based on Christian churches.

Zack: You don't see a lot of flowers in Midgar
Aerith: They only grow here. Although, I planted some outside my house, too.
Zack and Aerith talking about flowers.

Zack Fair, SOLDIER First Class, falls from an unfinished section of the Sector 5 plate into the church. He awakens and meets Aerith asking to repay her with a date for saving him, although a puzzled Aerith asserts she did nothing but called out to him until he came to. Zack continues to visit the church to spend time with her up until he is sent on the mission to Nibelheim. Zack is impressed by the flowers and deems they would be seen as a luxury item in Midgar, offering to build her a flower wagon to help her sell them. After Zack's mentor Angeal Hewley passes away, a devastated Zack is comforted by Aerith in the church.

One day, Zack and Aerith witness an Angeal Copy, a winged wolf-creature, in the church defending the duo from Shinra Electric Power Company's battle robots. Deeming the creature not dangerous, Aerith and Zack let it rest in the church. It is implied the creature stayed at the church as Aerith uses it to send her final letter to Zack.

Informed by their Shinra contact of the existence of a Cetra descendant named Aerith Gainsborough, Avalanche attempts to capture her to protect the location of the promised land.

The Player Turk lost in the slums has found his/her way to Elmyra Gainsborough's house where they come across Aerith who flees. As Avalanche arrives Aerith returns and is protected by the Turk much to her surprise.

Hiding in the Sector 5 slums Aerith loses her White Materia, and as the Player Turk goes to retrieve it, Shears locates them and disposes of the Player Turk, taking Aerith to the Sector 5 Church where Fuhito and Elfe await. As they attempt to convince Aerith to divulge the location of the promised land, Aerith notes an ancient voice emanating from within Elfe is in pain. Elfe is confused by this revelation, and Fuhito becomes flustered and attempts to divert the subject. When Shears notices the Player Turk eavesdropping a fight breaks out but Aerith prevents Shears and Fuhito from killing the Turk, claiming she is defending her flower bed from further harm. During the commotion something seems to pain Elfe, who withdraws along with the rest of Avalanche.

As the Player Turk and Aerith leave the church, Tseng, who has been assigned for some time to capture Aerith, arrives in another attempt to convince her to work with Shinra. Misunderstanding, the Player Turk prevents Tseng from seeing Aerith as she runs back home.

Cloud falls from the Sector 5 Reactor down into the church and is found by Aerith, who remarks on Cloud's similarities with Zack. When Reno, a member of the Turks leading a group of Shinra soldiers, attempts to kidnap Aerith, she requests Cloud to be her bodyguard. In return for the favor, Cloud says he will in exchange for payment, to which Aerith replies "How about if I go out with you once?". Accepting the deal, the pair exits through an opening in the roof, as the Turks try to capture Aerith.

In Aerith's absence, two children take care of the flowers.

Upon the party's return to Midgar following finding the Sector 5 Key at the Bone Village, the church can be explored and a "ghost" of Aerith seen, but disappears when approached.

The church serves a pivotal role in curing the Geostigma disease. Even after Aerith's death, the flowers continue blooming thanks to the lifestream flowing beneath the flower bed. Cloud stays at the church during his exile and search for forgiveness, and stores materia in a chest in the church for some time before this.

Tifa engages Loz in the church when she and Marlene go looking for Cloud. She is defeated, and Cloud later finds her lying unconscious on the flower bed. Later, Aerith's Limit Break, Great Gospel, is activated in the church during Cloud's battle with Kadaj, curing Cloud's Geostigma.

Cloud demonstrates the healing powers of the water pooled in the church by curing Denzel of his Geostigma in a baptismal-like ceremony, after which several other children jump into the pool. Cloud spots Aerith crouching by some other children, similar to the aforementioned ghost. As she stands and walks to the doorway, she turns back to ensure Cloud will be alright, and steps into a white light with Zack. Cloud nods and responds he will be fine, as he is not alone anymore.

The Sector 5 church is located in the Sector 5 slums in an area surrounded by rubble, construction material, and apparently abandoned shanty houses. It resembles a Catholic church, and—unusually for Midgar—flowers grow under the broken floorboards in the chapel thanks to a hole in the roof that lets in light and rain.

The chapel, the main room of the church, has rows of benches leading towards the flowers in the center. At the back of the church is a staircase up to the pillars by the ceiling, though the back is also largely in ruin due to a crash of what appears to be a rocket through the ceiling. The attic has several pillars at the top, with a path through the hole in the roof. In Final Fantasy VII Remake, the attic is filled with stockpiles of items: boxes, plastic containers, and bottles.

In an optional dialogue sequence with Cid in Final Fantasy VII (if spoken to onboard the Highwind after Diamond Weapon emerges and begins charging toward Midgar), he says, "That reminds me of a test rocket that landed in the Midgar Slums long ago. I remember how relieved I was when I heard it never blew up." The crashed rocket in the church is most likely the rocket that Cid was referring to.

In both the original Final Fantasy VII and Advent Children, the church appears to be built near Midgar's exterior walls, facing the center of the city, but doesn't seem to be anywhere near the base of mako reactor 5 though Cloud falls into the church from there. Furthermore, in Crisis Core and Final Fantasy VII Remake, the church faces away from the center of Midgar, and appears to be located even farther from the reactor, since the Sector 5 plate's pillar can be clearly seen from the outside.

The Church in the Slums area is visited during the chapter "The Woman at the Church" after Cloud crashes in from the No. 5 Reactor. Here, Cloud meets Aeris, and the two must escape from the Turks. The quest to escape involves a minigame in which Cloud must push barrels to defeat enemies, or Aeris must fight them.

The Sector 5 Slums - Church area is part of the Sector 5 Slums field, and is first visited in "Second Chance Meeting" during Chapter 8, "Budding Bodyguard." It is later visited during a few sidequests in Chapter 14, "In Search of Hope."

During "Budding Bodyguard," the gameplay is slightly different from the original Final Fantasy VII in that a Reno boss battle with only Cloud Strife takes place. After this, gameplay to escape the church is similar, and Cloud is able to cut down a chandelier from the ceiling in reference to the barrel minigame from the original, though Aerith Gainsborough does not yet join the party. The player can find a

Chakra Materia when returning here, and Medicinal Flowers for a quest in Chapter 14.

"Flowers Blooming in the Church"

During the ending of Final Fantasy VII: Advent Children, which takes place in the church, the song "Cloud Smiles" plays.

It also appears as a battle background in a Battle Music Sequence.

The church interior and its flowerbed were recreated for the Final Fantasy 30th Anniversary exhibition in Japan in January 2018.

The fight sequence in the church between Loz and Tifa in Advent Children was duplicated in the music video for the Korean pop singer Ivy MV's "Temptation of Sonata", albeit with minor changes, such as small parts of the fighting choreography being altered due to the absence of Loz's Dual Hound, and Tifa's victory by snapping Loz's neck at the end. The music video was banned on TV and singer Ivy was sued by Square Enix.

In Final Fantasy VII Remake, before talking to Aerith and triggering Reno to appear, it is possible to hear a line from Reno by moving near the church exit. The line is a reference to the original game, and its inclusion was proposed by developers working on the location as a nod to the original.[1] In Episode InterMISSION, when Zack visits the church to find it filled with refugees, the people in the church appear to be the same topside dwellers who appeared in the main game's opening cinematic.

The reason why flowers grow in Aerith's garden and the church despite Midgar being considered barren is because a river runs through the outskirts of Sector 5 undercity, bringing fresh nutrient-rich water from the lifestream to both Aerith's house and the dilapidated church. Aerith uses this water to tend to her flowers. Another reason Aerith is so successful in cultivating flowers is her heritage as an Ancient.[2]

The symbol in the chapel appears to be a IX monogram, one of the earliest Christian symbols. In Greek it says "Jesus Christ", Iota for Jesus and X or Chi for Christ. The picture with the circle over the symbol makes it resemble the Chi Rho, also known as the "Constantine Cross". It was used by the Roman Emperor "Saint Constantine".

A possible real-world Christian inspiration for the church is the Basilica of Our Lady of Guadalupe in Mexico City, which was built after Mary appeared to St. Juan Diego nearby in December 1531 and led him to the top of Tepeyac Hill, where he found Castilian roses, which were blooming in spite of them not being native to Mexico and out of season, to take to the area's Spanish bishop, Fray Juan de Zumarraga, as proof.

The church flowers were initially portrayed as yellow, but from Advent Children onwards white flowers have been mixed into the flowerbed. The flowers resemble real world Lilium genus of flowers (true lilies), important in culture and literature in much of the world. In the Victorian language of flowers lilies portray love, ardor, and affection for loved ones. Lilies are commonly used at funerals where they signify the soul has been restored to the state of innocence. The Taiwanese lily grows near bodies of clean water, leading to beliefs that harming them damages the environment. Easter lily is a plant endemic to Taiwan and Ryukyu Islands of Japan known as such for symbolizing of the resurrection of Christ.

Official wallpaper of Barret and Marlene in the church. 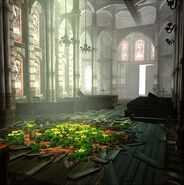 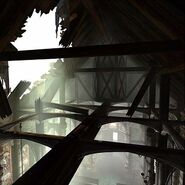 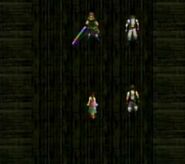 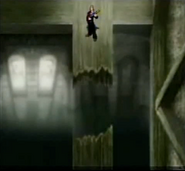 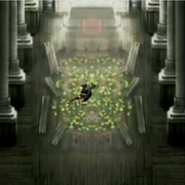 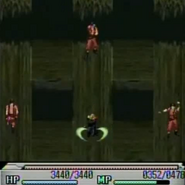 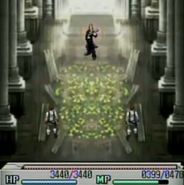