Sector 5 Slum is a field map in Final Fantasy VII taking place in the slums beneath the Sector 5 plate. It is first visited by Cloud and Aeris in "The Woman at the Church" after Cloud crash lands in the Church in the Slums, and is the location of the church as well as Aeris's house.

The outskirts of the Sector 5 Slum lead to the world map. They contain little more than a locked gate leading to the slums inside, and one or two non-player characters around the barren wasteland surrounding Midgar. The area is first accessed from the Midgar Expressway, but after that can be accessed any time upon return to Midgar. The gate is opened using the Key to Sector 5.

Outside the Sector 5 Slums Church are piles of rubble in the form of construction material as well as material resembling the Church, as well as a few houses. It is mostly barren and lifeless outside of the Church itself, a colorful building which is a contrast to its surroundings. This area grants access to the Church, the Outskirts to leave the city, or the Street to head further inwards.

The Rooftops area is accessible very briefly, after Cloud and Aeris escape the church, and cannot be accessed again. It features the rooftops of many of the slum houses, as Cloud and Aeris hop across them, with dialogue exchanged between them. Upon leaving, the two end up in the east street.

Streets on the west (top) and east side (bottom).

Two streets are located in the slums, leading to other areas around Midgar's slums. Both streets are similar in appearance, and are both diagonal paths leading upwards and left, along barren areas containing a few small houses made of mostly scrap.

The west street has two pathways up north, one on the left leading to Sector 6, and one on the right leading to the local market in the Sector 5 slum. On the east street to the bottom-right is a path leading to the Church entrance, while at the top left leads to an open gate to the western streets.

The Market is the liveliest location in the Sector 5 slums, containing pathways leading to many of the other locations, and to a store for weapons, items and Materia. At the far-west of the market, slightly above the entrance from the streets on the southwest, is a pipe containing a man's home, while the rest of the area contains caravan or slum homes either inaccessible or with shops. The far east of the area contains a path leading to Aeris's garden.

The Earthen Pipe in the market is a small, tubular home of a single non-player character. The small home contains a TV, a small bedsheet, and a few trophies on a shelf. The room either contains the owner in his room responding only with groaning sounds, or contains a black cloak left behind where he once was, depending on which point in the story the player is.

The Materia Store is located slightly to the west of the center at the south of the market, neighboring the Item Store. It contains a single floor with one non-player character who sells Materia. The store's main room is mostly gray and metallic, aside from pots and pans and a fridge.

On the southeastern end of the market, a two-story house is located. Its first floor is a metallic floor with a television showing news and a single non-player character, with basic furniture. It has a staircase leading to the second floor. The second floor is wooden, containing a number one Turtle's Paradise, a bed, a drawer with three possible slots in it and a child non-player character. 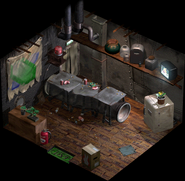 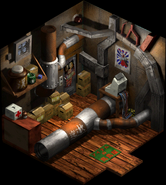 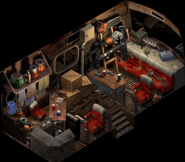 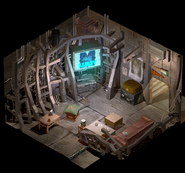 Entered from the market, Aeris' garden has two different platforms, both with flowers, connected by wooden ladders, making it roughly a 2-level screen. The furthest platform contains an item and a Cover Materia and is roughly flush with the entry area, but can only be accessed by way of the upper platform. Her house is on the entry platform. The garden is a very sharp contrast to the rest of the slums due to its bright colors and much cleaner look. Light shines in from above. The depiction varies significantly between appearances, with some ignoring the river between the two lower platforms and even omitting the upper platform entirely.

Located on the western-most island of Aeris' garden, the house has a hexagonal theme with a number of irregularities including a smaller hexagon merged into the larger one of the first floor (making it a pentagon due to the overlap) and a smaller, slightly tilted upper level, as if it had been added onto multiple times with varying degrees of expertise. Despite this, it has a charming appearance, with flowers growing on some of the roof sections and pinkish-red roof tiles. Unlike the garden, the house exterior remains relatively consistent between appearances.

The first floor is an open area that contains a well-made group of joined rooms made of mostly stone, with a table in the center and pieces of furniture around it, including flowers in pots. At the top-left, stairs lead to the second floor. Elmyra can be found here.

The second floor is a wooden area that contains two bedrooms and a hallway leading to the stairs. Keeping with the theme of the first floor, it has some furniture around it and flowers in pots.

On the first visit to Sector 5, items can be found in Aeris's garden, where the furthest island contains an item and a Cover Materia.

In the market, a Turbo Ether can be obtained based on the player's choices. If the player talks to the boy in the house on the second floor and hears mumbling, then interacts with the hidden draw and chooses not to take the five gil, then upon returning the boy will give them a Turbo Ether.

More items can be found during the return to Midgar.

In one of the houses, there is a boy sleeping upstairs. If the player looks into the drawers they can find 5 gil in a hidden compartment. If the player takes the money they will later find the boy crying over having lost his savings. If the player leaves the money, the boy will give out a Turbo Ether later on. The boy's room also has one of the Turtle's Paradise fliers on the wall.

Upon returning to Midgar using the Key to Sector 5 in Bone Village, Sector 5 can be visited, and new items can be accessed. The player can still find Turtle's Paradise Flier #1 inside of a residence in Sector 5 in case it was missed, and sleep for free in Aeris's house. The man in the pipe Cloud and Aeris could find the first time visiting the area is no longer there, and nearby NPCs say he has departed while talking of the Reunion.

The following items can be found:

At her house Aeris asks Cloud if Tifa is his girlfriend:

After finding Marlene at Aeris's house, she asks if Cloud thinks Aeris is interested in him: