The Sector 5 Reactor is one of the eight Mako Reactors built by the Shinra Electric Power Company to power the metropolis of Midgar in Final Fantasy VII. In the original Final Fantasy VII its layout is exactly the same as the Sector 1 Reactor's.

Zack Fair and his fellow SOLDIER First Class, Sephiroth, enter the reactor in search of the rogues, Genesis Rhapsodos and Dr Hollander. They fight Sahagin-like monsters, but with a strange mutation: they have the face of their missing friend, Angeal Hewley.

Further investigation discovers both Angeal and Genesis were parts of Project G, an experiment performed by Hollander to make a modern Ancient. The experiment was a failure and Genesis had begun to slowly degrade, and could make copies of himself on humans.

Hollander and Genesis arrive, and while Sephiroth deals with his old friend, Zack chases after Hollander until they reach the bottom of the plate. When Zack has Hollander cornered, Angeal arrives and shows Zack he is a monster by sprouting a white wing, then attacks. Zack refuses to fight his old friend, but the ground beneath Zack breaks from Angeal's attack, and Zack falls into the slums below.

Following their successful attack on the Sector 1 Reactor, the members of the eco-terrorist organization AVALANCHE hope to repeat their victory on the No. 5 Reactor. After climbing through the city's underground subway system they break into the reactor. AVALANCHE fights its way down to the main generator and plant the explosives. On their way out, President Shinra greets the insurgents; Shinra had known of the attack beforehand, and prepared the reactor as a trap for AVALANCHE.

The robot Air Buster is sent in to defeat the terrorists, while President Shinra leaves, certain of victory. The party destroy the Air Buster and as it explodes, Cloud Strife is caught in the blast and falls into the slums below like Zack had done seven years earlier.

Although the reactor explodes, it is later seen in use powering the Sister Ray cannon, indicating Shinra repaired the damage, unlike the Sector 1 Reactor, which was utterly destroyed and never repaired. This is odd, given that Jessie said she would make her next bomb even more powerful than the one that destroyed the Sector 1 Reactor, but is supported by the visibly smaller explosion that results. Given that Shinra had enough foreknowledge to set an ambush, it's possible the explosion was mitigated by them in some way.

The Main Staircase is accessed from Sector 4 - Exit. Here, the party can descend down the flights of stairs to access the upper piping. As the Sector 5 Reactor was not entered through the entrance like the Sector 1 Reactor was, this is the first area the party visits.

The Upper Piping is a small room in which the party can move across the top, before hopping onto the pipe and climbing down to descend into the lower piping. It contains ladders and what appear to be large steam pipes.

Accessed from Upper Ping, the Lower Piping similarly contains ladders and steam pipes. The party must traverse down in order to reach the core.

The core contains a large, piped, electrical machine with a valve at the bottom, and consists only of a small walkway towards it. Once the party accesses the valve, a cutscene initiates, and a bomb is planted to be detonated remotely, and there is no timer similar to the Sector 1 Reactor.

When accessed, the elevator only contains a small space, with a button to press for it to ascend up to the entrance.

The Entrance leads to Sector 5 - Outside Reactor, and has a much more light-brownish, metallic look. This area is accessed last, after the party retraces their steps through the reactor to exit. The door unlock minigame is required to leave.

The Sector 5 Reactor is entered through the underground subways, and the party arrives in the room with the main staircase. From here, the player must descend down to the Core, fighting random encounters along the way, where a cutscene will initiate and AVALANCHE plants the bomb. After this, the player must then ascend back up to the main staircase by retracing their steps and entering through the door at the very top of the room to the elevator, which will take them up to the entrance of the Reactor where they will leave. A minigame is required to unlock the door, and the party will then leave the reactor, but must fight Air Buster on the way out.

In order to leave the Reactor, the party must leave through its entrance, which is blocked off at the end by a gate that can be opened only through a terminal in a room to the left of it. Cloud, Tifa and Barret must all press the button simultaneously in order to open it. The player controls Cloud, and must press the button (using

on PlayStation, [OK] on PC,

on PlayStation 4) closely in time with the others. The other two will press the button approximately two seconds after Tifa announces it, which the player must time.

Cloud is barely hanging on after the explosion:

Throughout the reactor, the background music is "Mako Reactor" (魔晄炉, Makō Ro?). In Crisis Core -Final Fantasy VII- "The Skyscraper of Iron and Steel" plays, and later "Combat" when chasing Hollander.

Cloud collects his reward at AVALANCHE headquarters and turns to leave, but his childhood friend Tifa convinces him to join their raid on Mako Reactor No. 5.

Defeat the Air Buster without being KO'd. 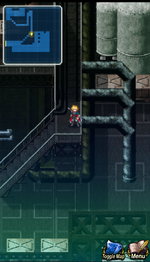