The Sealed Temple, known as ??? Cave before entering its depths, is a bonus dungeon in Final Fantasy V Advance and the defunct 2013 mobile/Steam versions. It is located underwater, south of Phantom Village, and contains four crystal shards with the jobs of Cannoneer, Gladiator, Oracle, and Necromancer, although the latter is not received until after the dungeon's main boss, Enuo, is beaten.

The temple can be entered after obtaining the tablets (and the twelve legendary weapons), where the party can acquire three of the four new jobs. After beating Neo Exdeath, the final boss of the main game, the switch at the first chamber unlocks the entrance to the Sealed Temple. The Cloister of the Dead opens by defeating Enuo. 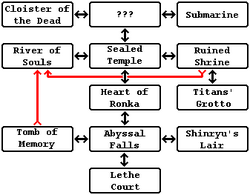 The Sealed Temple is divided into several wings; the use of the Read Ahead ability of the Oracle is recommended to explore all locations:

Past the save point room in the ??? cave, the Sealed Temple wing is divided into four sections. From the central section, the northern door leads back into the save point room in the ??? Cave, the western door leads to the Dungeon, the eastern door leads to the Corridor, and the central door, initially sealed, leads to the Arena, and can be unlocked by giving a captured Behemoth to the NPC in B3 of the River of Souls. The Dungeon leads to the River of Souls, and has the Archeodemon boss, who is imprisoned behind a locked door, which can be opened with the Dungeon Key from an NPC in the Hall of Tranquility, defeating the Archeodemon unseals the teleporter from the Hall of Tranquility to Lethe Court.

This is a three-floor cave where the player can have a rematch with the Gil Turtle on B2. It is connected to the Dungeon. Giving a captured Behemoth to an NPC in B3 opens the sealed Arena gate.

Cave with two floors where the player can find and catch a Behemoth to progress further in the dungeon. B2 connects to the Hall of the Watchmen.

Ruins with the same architecture as the ones under Crescent, from where the player can access the Abyssal Falls. Four floors, the Treasure Room (between the Arena and B1), B1, B2 (which connects to Abyssal Falls), and the Warp Zone. The Warp Zone includes a teleporter back to the Sealed Temple entrance.

Westernmost section of the Abyssal Falls, divided into two rooms. From the main room, the player can access the Tomb of Memory and the Lethe Court, and an NPC who gives the party the Dungeon Key, which allows them to open the jail cells in the Dungeon and fight Archeodemon. The two-way teleporter to Lethe Court is sealed until the Archeodemon in the Dungeon area is defeated. To the north of the main room has a small save point room.

Area with the same layout as the Pyramid of Moore where the player can find Omega Mk.II. Four floors: Decedent's Path (uppermost floor, contains a pit trap to B2 of the River of Souls and a switch opening the door to Shinryu's Lair), Incubi's Path (connected to the Hall of Tranquility), Iniquity's Path and the Throne Room (containing Omega Mk.II).

Every monster wandering visibly around the Incubi's Path floor is an Omega, each with the same stats as the one fought in the Interdimensional Rift during the main storyline.

Cave filled with lava where the player can find Neo Shinryu. It has three floors: the Entryway, the Treasure Room and Shinryu's Roost.

The final area of the temple, where the ultimate evil, Enuo, rests, protected by its mechanical Guardian. The player's reward for defeating the boss is the Necromancer Job and access to the Cloister of the Dead. The area bears structural similarities to the final area of the Interdimensional Rift, and is divided into three sections: The Shadowed Gate, The Stairs of Destiny (where the player fights the Guardian), and the third final area, where Enuo rests, is simply called The Void. Defeating Enuo teleports the party back to the dungeon entrance.

Cloister of the Dead[]

Similar architecture to the Lethe Court and the final area of the Interdimensional Rift. Divided into six floors. The player can rebattle most of the bosses here, in six groups of five battles. Leaving the Cloister resets battles. Clearing the final floor awards the Medal of Smiting. The player can repeat the battles as many times as they want.

Cloister of the Dead

"In Search of Light"

The Sealed Temple on the world map (GBA).

The entrance to the Sealed Temple (GBA).

A map of the Sealed Temple.

The entrance to the Sealed Temple (World Map) (iOS).