The gates here are their own keepers.

The cave's gate is sealed, and only a necklace held by Luca, the princess of the dwarves, can open it. The cave's passages are bewitched to reveal Trap Doors whenever an intruder attempts to open a door and a wall attempts to trap intruders who have retrieved the Crystal.

The SNES and PS versions of Final Fantasy IV contain a Sealed Cave glitch that allows the player to skip the cave completely.

Cecil, Kain, Rydia, Rosa, and Edge arrive at the cave with the necklace and open the door. After they obtain the Crystal they are ambushed by the Demon Wall as they exit the cave. Golbez reaches out with his mind and bewitches Kain into stealing the Crystal and bringing it to him.

A year later monsters are reported to be swarming out of the Sealed Cave. Cecil, Cid, Palom and Porom travel to the cave to investigate and find Rydia collapsed in the Crystal Room. She awakens as they approach and says nothing but to urge them to go to the Tower of Babil.

Rydia, with the help of Luca and her dolls, Calca and Brina, go to the Sealed Cave to retrieve the Dark Crystal to protect it from the Mysterious Girl. Their attempts are futile as she appears when they attempt to leave the cave with the Crystal and takes it from them, incapacitating Calca and Brina in the process.

It is accessible from B5's north exit, and holds the last Dark Crystal. After the party obtains it, they must get out of the cave quickly, by foot, as the Teleport and Warp spells will not work.

After the party obtains the last Dark Crystal, the Demon Wall will close in on them just as they exit the crystal chamber. The party has to defeat the Demon Wall in B5 to get out of the cave.

- * - Summoned by the last Trap Door when weakened in B5 before the Crystal Room.

The background music for inside the Sealed Cave is the Final Fantasy IV "Dungeon" theme.

Rydia found in the crystal room in the Sealed Cave in Final Fantasy IV -Interlude-.

Sealed Cave in The After Years (iOS). 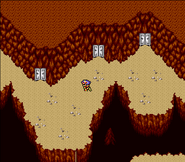 Sealed Cave on the world map in Final Fantasy IV: The After Years (Wii).