Inside:
Outside (Second World):
Outside (merged world):

Kuza, the Sealed Castle is a location in Final Fantasy V in Galuf's world and the merged world. It is an ancient castle containing the legendary Sealed Weapons, located south of Regole on the continent of Gloceana.

In Galuf's world, the party cannot do anything at the time, though the Shield Dragons fought there can be used to level grind. In the merged world, as well as becoming the resting place of enemies called Exdeath's Souls, retrieving the tablets and bringing them to the castle one by one allows the party to retrieve the Sealed Weapons, three for each tablet, until all twelve have been obtained. The weapons can be claimed in any order.

One thousand years prior to the events of Final Fantasy V, after the twelve legendary weapons were used to defeat Enuo, the weapons were sealed in the castle of Kuza.[1] Because the void created by Enuo could not be erased, the world was split in two to maintain balance,[2] and the castle went to Galuf's world.

Despite the knowledge of the split worlds fading from memory, residents of Galuf's world, including Regole villagers, were aware of the weapons contained within and a war being fought a millennium ago.[3]. During the events of Final Fantasy V, the Light Warriors visited the castle, wherein Galuf Halm Baldesion explained its nature.[note 1]

When the worlds merged, scholars from Surgate who studied at the Library of the Ancients theorized it would be located east of Tule.[4] The chancellor and scholars from the Wind Shrine found the Sealed Castle and explored it. After the Light Warriors found the tablets, they unsealed the Sealed Weapons to use them to defeat Exdeath and the demons of the Interdimensional Rift.

The worlds merging caused the Sealed Castle to appear over the cave where Exdeath had been sealed.[5]

Despite being at least 1,000 years old,[1][2] the Sealed Castle resembles other castles seen during Final Fantasy V.

In Galuf's world, aside from battling Shield Dragons, there is little for the party to do. Entering in far enough will allow Galuf to explain the castle's nature.[note 1]

In the merged world, the castle is visited to obtain weapons. The chancellor and scholars from the Wind Shrine can be found in the first room, and help the player obtain the tablets by giving clues as to where they may be located. The scholar in the bottom right corner will reveal a healing pot, which replenishes HP and MP.

"Sealed Away" from Final Fantasy V

"Sealed Away" (封印されしもの, Fūinsareshi Mono?) plays as the background music for the earlier rooms of the Sealed Castle. The weapon room has "Sealed Book" (封印の書, Fūin no Sho?) as its background theme. 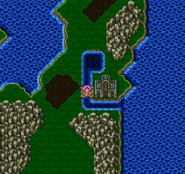 Sealed Castle on the overworld (SNES).

The Sealed Castle on the World Map in Galuf's world (GBA). 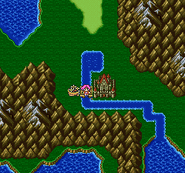 The Sealed Castle on the World Map in the merged world (GBA).

Lenna releasing the Excalibur from its seal.