Stop, Silence
Seal Evil is Aeris's second level 1 Limit in Final Fantasy VII. It casts Stop and Silence on all enemies, rendering them harmless to the player for the duration of the statuses.

Seal Evil is obtained by performing Healing Wind eight times. Aeris can equip the Cover Materia and use a Hyper to achieve this more quickly.

Seal Evil casts Stop, which freezes an enemy in place, and Silence, which prevents them from casting spells. This can make enemies harmless for the duration of Stop, and restricts them to physical attacks under Silence. The ability can be useful in dire situations against groups of powerful enemies, but against many bosses is ineffective due to immunity to Stop and Silence being common. In these situations, Healing Wind is a better choice.

Seal Evil is Aeris's only Limit Break that targets enemies. However, it offers less utility to the player than Aeris's later Limit Breaks, especially because many more powerful bosses are immune to Stop and Silence. As such, Aeris is better off equipping later Limit Breaks when they become available to her. 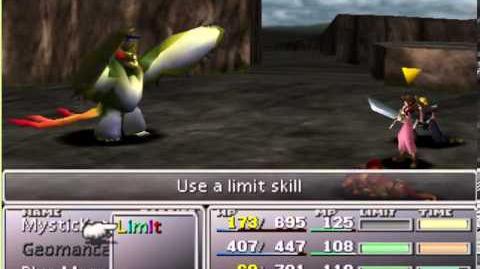